A Tough Lesson On The Road To Commercialization

How do researchers determine their science is worth taking to translational research and commercialization? Good science alone is not enough. The challenges of funding, competition, and regulatory hurdles crush many endeavors. Entrepreneurs find that commercialization starts with good data but requires developing networks, precise planning, building an experienced team, and perseverance. 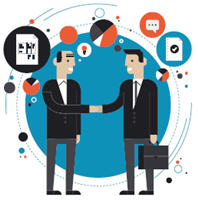 Mike Sherman, CFO at Endocyte Inc., says, “Some endeavors get started without an understanding of the real world. I don’t know how many interesting ideas I’ve heard that fall down on one of three elements: solving a problem that physicians don’t see as a problem, creating a solution that will be made obsolete by a competitive alternative that was ahead in the game, or an unclear path on how you would get approval.”

Sherman says the core team has to make a frank assessment of the discovery. Based on seeing the preclinical evidence, does it makes sense that the science should work in humans? Is there specificity for the targets? Does this discovery bring a meaningful advantage over current treatments? Is this a breakthrough or just a bit of new knowledge? If the determination on the science is positive, the assessment then becomes one of business. The process to commercialization goes in steps. So the team has to evaluate its prospects for each of those steps to determine if they have the necessary resources and perseverance. Choosing a viable platform for development is part science and part business.

IT STARTS WITH NOVEL SCIENCE
One easy answer on whether to proceed to a start-up is investor buy-in. Venture capitalists look for “interesting science” that provides a significant advantage in treating an important human disease. Their support is an explicit endorsement of the science. “When you publish a series of articles showing innovative science, it’s amazing how venture capital firms contact you and say, ‘Let’s start a company,’” says Sherman.

The “interesting science” for Endocyte is its small molecule drug conjugate (SMDC) technology, which provides targeted delivery of drug payloads to diseased cells and a companion imaging agent that helps identify patients most likely to benefit from SMDC therapy. The technology is based on the research of Purdue professor and chief science officer at Endocyte, Philip Low, Ph.D. and Chris Leamon, Ph.D., vice president of research at Endocyte. Leamon says, “It’s a Trojan horse approach. We target the disease and bypass healthy cells.”

Endocyte uses small molecular weight ligands to carry drug payloads to targeted cells. Initially the company focused on folate receptors, which are highly expressed on certain cancer cells, but not appreciably on healthy cells. Endocyte has designed a linker construct to attach potent therapeutics to folate, creating an SMDC. When injected, the SMDCs perfuse quickly and bind to the folate receptors. The cancer cell takes up the folate and payload through endocytosis. Once in the cell, the linker releases the payload, which begins its activity in destroying the cancer cell.

But interesting science and good data don’t assure buy-in. Without early VC backing, an entrepreneur has to carefully reassess the discovery to determine its impact on human health, rework a detailed business plan that may win investors’ trust, and evaluate whether the core team has the stamina and resources to pursue a protracted campaign to get support. Venture capitalist Larry Lasky, Ph.D., a partner at U.S. Venture Partners, says, “Good science always bubbles to the top.” It may just take longer and require perseverance, especially if one challenges current accepted knowledge or lacks standing in the scientific community.

Ingmar Hoerr, Ph.D., MBA, cofounder and CEO of CureVac GmbH, says he was met with skepticism when he attempted to get support for his research in mRNA (messenger ribonucleic acid), which CureVac is now developing as an entirely new class of therapeutics. In the late 1990s when then-Ph.D. candidate Hoerr was conducting experiments in gene therapy, accepted thought assumed that mRNA was too unstable to last long enough to effect a T-cell immune response. Unexpectedly, the immune response in his experiment was greater with mRNA than the test compound. Hoerr says, “I thought I had failed completely.” He repeated the experiment, taking even greater care and got the same results.

His research was met with suspicion and doubt. He asked himself, “What should I do now? Nobody believes me.” He did find, however, a believer with complementary skills in his lab research partner and Ph.D. candidate Florian von der Mülbe, now COO at CureVac. The two started a company and shopped their research around German VCs without success. Hoerr says, “We were Ph.D. candidates, 30 and 31 years old. We were so naive. We told the investors we had discovered this new biomolecular activity and had great results from our experiments.” Investors were not sold.

PERSEVERANCE
Based on the results of their work, Hoerr and von der Mülbe determined that mRNA was worth the effort to bring to market. They found that mRNA could be designed to induce an immune response that would target specific diseased cells. When injected, mRNA would be taken up by cells, recognized as antigenic, and trigger a precise immune response against the target disease. “You have to believe your science. We were living it. We believed it. None of the experiments were failing.” He and von der Mülbe returned to the university and continued to build data using grants and an investment from the VC firm Leonardo Venture.

With help from the city of Tübingen in the form of a €3 million ($4,117,317 U.S.) GMP lab facility, Hoerr took the company off-campus to continue development. 2003 to 2005 began what Hoerr describes as a very dark period; the company ran out of money. To stay afloat, they decided to manufacture and sell RNA. This not only provided cash flow, it gave them valuable expertise in manipulating and coding RNA.

NETWORKS PROVIDE INFORMATION, CONTACTS, AND SUPPORT
Networks offer more opportunities for feedback to analyze the value of a discovery. A company can learn about current research that might support its concept or lead to competitive products. The larger a network, the fewer the degrees of separation from contacts that can offer backing or resources.

Hoerr says early on he felt the road to market was all about the data, that the science would sell the VCs. “Which was wrong, of course,” he says. “It’s about everything. You have to be trusted. You have to have a reputation. You need a network.”

It was the network his company established through research and marketing RNA that finally got Hoerr in touch with Dietmar Hopp, the founder of SAP. He says, “It was the first time I was not in front of another researcher, VC, or banker. Here was contact with an entrepreneur. I told him we had a GMP facility. We were seeking regulatory advice. We had RNA and animal results. The only thing we didn’t have was money.” Hopp backed the company. It was that connection created through their network that garnered the funding to grow CureVac into an independent biotech.

Sherman says Endocyte had a network Dr. Low had established through his career. Low knew researchers in biochemistry and oncology and stayed in contact with the pharma industry. He was able to assess Endocyte’s science and predict it would be first in that space and successful. Targeted drug delivery with reduced side effects is very attractive, and his contacts provided the groundwork to seek partners in development and research.

IS THERE A CLEAR PATH TO REGULATORY APPROVAL?
The final critical analysis is whether the team feels they have a clear path to approval by regulatory agencies and acceptance by payers. Sherman says, “If you’re breaking ground in new pathways or where the regulatory path is not welldefined, there are challenges.”

New science doesn’t necessarily pose a barrier to approval. CureVac is in clinical trials with its mRNA technology to treat lung and prostate cancers, and they are conducting studies in prophylactic vaccines. Although mRNA technology is a new class of therapeutics, it is being applied in a known space. Cancer has an established path to approval, and the technology can be measured using current protocols and outcomes. Endocyte found that its technology was actually perceived as an advantage, because its companion imaging can predict which patients are most likely to benefit from the therapy.

ADVICE FROM LESSONS LEARNED
Determining whether a discovery can be commercialized begins with realistic analyses of all the steps to production, not just the science. Networks can provide additional thoughts on the viability of starting a company, but the empiric evidence comes when the endeavor receives financial backing.

Hoerr says, “The process to bring a product to market is not just about the science and research. It’s about humans, about a story.” The data is most important, but an entrepreneur needs to translate the science into a context that explains why the discovery is important, then inspire others to support the translational research and commercialization.

Leamon recommends starting with a passion for your work and staying connected to the patient. Knowing what the patient suffers helps you evaluate whether your discovery answers an important problem in the human condition and advances medicine.