At Navidea, A Scientific Advisory Board Points To New Directions

Until recently, Navidea Biopharmaceuticals (NYSE: NAVB) described itself as a leader in precision diagnostics that identify the presence and status of diseases. It focused on the development and commercialization of precision diagnostic agents for conditions such as cancer, dementia, and movement disorders. 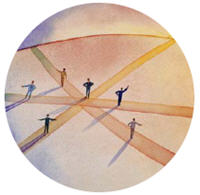 That was then. Ricardo J. (Rick) Gonzalez, president and CEO of Navidea, doesn’t plan to stay put. Which turns the company makes along the way to new business strategies will be decided in large part with direction from the Scientific Advisory Board (SAB) Gonzalez is currently assembling.

“There’s an evolution going on at Navidea,” says Gonzalez. “A big part is our growth out from a diagnostic focus into considerations of the therapeutic space. This can be a long road that offers great opportunities, but comes with embedded challenges. To manage this, we have the philosophy of questioning everything with the intention of optimizing what exists and continuing to drive into the future.”

Gonzalez will task his SAB with simultaneously providing and challenging the map to new business models. The good news is his board will have a relatively advanced starting point. Navidea, founded as Neoprobe Corp. in 1983, has gained a solid market footing with the product Lymphoseek (technetium Tc 99m tilmanocept injection) — a receptor-targeted, radiopharmaceutical imaging agent — approved by the FDA in 2013 and the EU in 2014. Navidea just announced on March 5 that it entered into an exclusive sublicense agreement for the commercialization and distribution of Lymphoseek in the EU, with SpePharm AG (an affiliate of Norgine BV). Navidea also has two imaging agents in Phase 3 development, NAV4694 (Alzheimer’s disease), and NAV5001 (Parkinson’s disease), as well as a handful of Phase 2 trials.

So, is this optimal timing for Navidea to form an SAB?

THE WHENS AND WHYS OF SABs
SABs are not new, novel, or a sure bet for enhancing progress or success, no matter what the company stage. Bruce Booth, writing for Forbes back in 2012, said, “Almost every biotech has a Scientific Advisory Board, but few use them particularly well. Although SABs can be hugely valuable ... they can also be a colossal distraction and huge time sink.” He went on to say SABs aren’t free, and especially larger ones have a high degree of entropy. Various opinions from highly skilled professionals and scientists “can lead to a herding of cats during meetings,” according to Booth.

Fair warnings, for sure. However, SABs have been around and studied now for decades; lessons certainly have been learned. In fact, Gonzalez can benefit from knowledge gained from a scientific advisory board established at Macrophage Therapeutics, a subsidiary of Navidea. This SAB was established specifically “to develop therapeutic applications for the Manocept platform, the technology upon which the company was formed.” The board is composed of scientists and clinicians in the areas of oncology, immunology, autoimmune diseases, and macrophage biology.

It’s also worth mentioning here that historically SABs grew in importance due in part to unintended consequences of the Sarbanes-Oxley act of 2002. Sarbanes-Oxley forced corporate boards to focus on financials and matters of compensation and legal disclosure. Even for relatively smaller biopharma companies like Navidea (currently 40 employees), because of the potential for broad application of fast-changing and complex science and technology, there’s little time for corporate boards to focus substantially on future planning.

Another salient point is that for pre-IPO and early-stage organizations, SABs play the role of company — and technology — validators. When companies become more established, SABs are then a support system for internal scientific management and product development. They also provide the time-constrained corporate board with a valuable link to progress in these areas.

Which brings us back specifically to Navidea and CEO Gonzalez.

"The trick is to balance the great minds on the SAB and form consensus. The loudest voice can’t win."

ADVISING ON THE UNIQUE
“The genesis of the Navidea SAB is predicated on the unique ability of our technologies to target cells that could not be targeted before,” explains Gonzalez. He adds, “So that’s the broad statement.” Now Navidea needs to understand how to yield value.

“The SAB is where we mine the company data, where technology meets scientific and clinical minds to identify the development path,” continues Gonzalez. “For example, when we specifically look at our technology’s targeting mechanism to activate macrophages, there are broad applications. Where to put it to best use is the question for the board.”

Gonzalez, who works from Navidea headquarters in Dublin, OH, says the company has identified experts around the world with in-depth knowledge of macrophage behavior. They understand the science, but as importantly, they understand the clinical applications and business considerations when advising on next steps. He first intends to present board members with “the body of evidence that we possess” for discussions on the broad scientific applications. But he wants this done with more of a focus on specific therapeutic areas, the direction Navidea now wants to move in.

One of the potential applications for the Manocept targeting mechanism is in oncology. However, as Gonzalez well knows, oncology is a large field with various opportunities and unmet medical needs. “The question is, then, which scientific advisors become most relevant to that disease state, and then form a working subgroup on how to focus on that therapeutic area,” says Gonzalez. “That will be the same with infectious diseases, cardiovascular diseases, and other areas.”

THE CEO AND SAB
A difficult first question every CEO needs to answer regarding an SAB, perhaps most particularly regarding one they have the opportunity to set up: How involved should I be, and what is my role?

Gonzalez has no hesitation in answering. “My background is more commercial, although I’ve been part of precommercialization and development projects. I won’t be directly involved with the scientific aspects of the SAB.” He will, though, directly ensure that execution and strategies are in accordance with the overall vision of the company. “I want to facilitate these processes, but I’ll rely heavily on others on my staff to lead.”

Which forms a second fundamental question: Who takes the reins — or the overall leadership role — on an SAB?

Again, Gonzalez has his answer ready: Michael Goldberg, M.D., a member of the Navidea board of directors since November 2013 and a managing partner of Montaur Capital Partners since January 2007. Dr. Goldberg also has a list of prior positions in biopharma.

With this appointment, Navidea introduces an interesting strategy: Employ an established corporate board member and accomplished scientist/business leader to play the role of SAB shepherd. This conveniently covers comments above regarding the role of SABs to keep corporate boards informed of progress and the concerns with getting a group of accomplished members to work together.

Regarding actually managing the SAB, Gonzalez says, “The trick is to balance the great minds on the SAB and form consensus. The loudest voice can’t win. Dr. Goldberg and I will set the tone and expectations for the SAB at the get-go to help avoid future issues.”

A different issue comes to mind here. An established corporate board member with a leadership role on the SAB could wield too much power. This could potentially stymie proposals expected to have difficulty in getting corporate board approval. For certain, these dual-board roles require a delicate balancing act. Gonzalez has faith in Dr. Goldberg; for his part, he says, “I will be cautious, specifically in our governance approach, and caution the group, in particular, on the management side of the SAB. They must be fully cognizant that we’re not here to please a particular group or individual. We’re here to accomplish a process as a board.” He adds, “Yes, I’ll be looking for any potential pitfalls along the way.”

Ultimately, says Gonzalez, “Via the SAB, my intention is to answer the ‘so-what’ question that is vital to companies. You have a technology, you determine a path ... what is the value you create? What comes back to us as part of this investment and this process? The focus is on the science and development, but we want to see what’s at the end. What are we trying to achieve for our business and our patients? The SAB is a key component of finding our future.”