Driving A Data Analytics Strategy From The Inside

The following is part one of a two-part series depicting the personal journey of a fictional CEO as he develops a data analytics strategy to shorten his drug development timeline and predict and prevent problems before they occur. 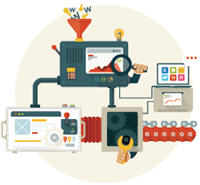 Cabot Harrington is a CEO of a midsize pharmaceutical company called Helioarc, and like most CEOs, he has an insatiable appetite for information, especially information that will help him better position his company in the market. His is a threedrug company with one in clinical trial, the second a mini-blockbuster in 24/7 production, and the third a bulk-powder product going to a Big Pharma partner. In total, his partnerships number nine when you include contract packaging partners, CROs, and logistics companies.

To satisfy his appetite for information he seeks data at every moment, and he reads constantly. He recently read something about Big Data and realized that he might have a Big Data problem at Helioarc, because his team seemed to spend more time reading reports than using data to move the company forward.

He grasped that his organization and the life science industry in general were huge collectors of data, and primarily data that looked back in time — for example, last month’s financial and clinical trial results. That got him thinking about how his teams currently interacted with data.

During his regular walks throughout his company’s laboratories and manufacturing floors, he noticed laptops, desktops, tablets, spiral bound notebooks, black leather laboratory notebooks, and tons of instrumentation with digital data. He knew that his contract packaging and clinical research partners delivered data to his company in Excel spreadsheets, often sent in emails. They weren’t on the same platform as Helioarc, and thus, all of that data had to be re-entered into his company’s software. Finally, when his CQV (commissioning and quality validation) department was working with the FDA last month, it was astonishing to Harrington how much validation data was still kept on paper and how much time it appeared to take to access relevant information.

When Does Data Look at the Future?
In one of those middle-of-the-night ruminations we all have, Harrington realized how to dramatically improve Helioarc’s position in the market — both on the clinical and commercial sides of the business.

He concluded that a majority of companies were still in the sense-and-respond stage, and he knew Helioarc still languished there as well. They were using data, post-generation, only to sense and respond, rarely discussing the future state with anything more than a rush to prepare for that quarter’s board meeting. Sometimes, during his midnight, home-office, caffeine-induced moments, Harrington could see the possibilities of predictive, comparative data collection. Last night, he looked at clinical data from a 2009 study that seemed eerily similar to a study being conducted by one of Helioarc’s current CRO partners. Now they were paying to do the same testing again. Did that make sense?

Harrington decided to set some goals that he was not sure were yet possible, or plausible, but they were a start:

It was an ambitious set of goals. Harrington realized that his first step was to communicate his vision to his IT group, the executive team, and board members. He needed to “talk the talk”, or at least understand some of this new language. If he were going to encourage his organization to develop a predictive analytics strategy for its clinical and regulatory/ compliance areas, he also needed to make everyone part of the discussion.

Predictive Analytics
If you can relate to any of Harrington’s revelations or challenges regarding Big Data, your goal should be to build a predictive analytics strategy. In other words, lead your organization to use the data that exists, improving its quality where necessary, to make better decisions for the future.

To do so, first huddle with your executive team and prioritize the specific data types to address. Then, make it clear that the entire company will be eliminating data silos and streamlining data entry. At most midsize pharmaceutical companies, accomplishing these three steps will take at least a year. It’s likely the whole implementation will take two years. Explain these time frames up front to your staff to ease some of the pain as the project drags on. You should also prepare your teams for significant infrastructure and procedural changes as they choose which data types to address first.

This series of articles will focus on prioritizing clinical data, although the process described here could apply to multiple areas inside your organization.

Help your team to imagine the possibilities. When clinical data becomes more accessible, portfolio management and pipeline evaluation could improve — a lot. If opportunities can be viewed across multiple studies, and different years of research can be evaluated together, it can open up possibilities never before considered. Use the term Analytics-as-a-Service (AaaS) when you speak to the team about this vision.

Data silos will come down between departments, as they should. Use the term “governance” when discussing who will become the new owners of various types of data. These new individuals or teams will undoubtedly be cross-discipline.

Ask IT about your EDW (enterprise data warehouse), which is a repository of information used for reporting and analytics. According to Forrester Research, an EDW includes key data management functions such as concurrency, security, storage, processing, SQL access, and integration. Although this conversation might get too technical, simply convey to your IT team that you do not want to commit to one vendor too early or consider only legacy enterprise solution providers (e.g. HP, IBM, Microsoft, SSAP, Pivotal, Teradata, Amazon Web Services, ParAccel). It is critical to evaluate the current state of your data situation with a neutral eye.

As mentioned earlier, data cleansing and aggregation of your own data is the single most difficult step. No matter where you start, it is arduous. Aggregating data in a new data repository and instituting guidelines for entering the data consistently, so the data is “clean,” take time.