Neoantigenics is a biotechnology company that was based on unique IP that was discovered at the University of Virginia (UVA). John Herr, Ph.D., chief scientific officer, is the principal investigator and a tenured professor in the Departments of Cell Biology and Biomedical Engineering at UVA. 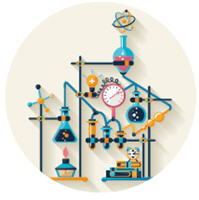 He is widely known as a world-class reproductive biologist who discovered that proteins, normally unique to the growing egg (as opposed to the ovarian reserve or later stages, such as after the formation of germ layers), were also showing up in cancers, making them viable and specific targets for cancer therapeutics. Dr. Herr had previous experience starting a company, but he couldn’t do it alone, so UVA insisted he get help from Brian Pollok, Ph.D. Pollok, CEO of Neoantigenics, is a talented entrepreneur with roots at UVA. He has ample previous experience with both Pfizer and Life Technologies (currently owned by Thermo Fisher). The executive team of this new venture was further strengthened by the addition of Ed Leary, CFO, who had previous experience starting a diagnostics company with Dr. Herr. Leary came in with an understanding of how to raise funding for a new company without diluting its future value. It was the formation of this trio dream team of complementary talents that was pivotal in the rise of Neoantigenics from within the university.

WHAT TO LOOK FOR IN A NEW BIOTECHNOLOGY COMPANY
“The most important item is to create high value intellectual properties that are owned by the institution,” says Dr. Herr, who had been working since 1995 on developing an oocyte proteome and publishing his results. That work provided him with the insight that some of these proteins were showing up in cancer as neoantigens. So he identified cell models that expressed a candidate target, and he created prototype immunotoxins and showed that you could kill cancer cells via this class of target. By 2008 there were seven disclosures and two patent families. “There was a firm patent foundation on which to build,” says Dr. Herr. Patents were based on the demonstration that the SAS1B neoantigen had membrane forms, that it had high incidences in many types of cancers, and that it could be targeted by immunotoxin drugs to kill cancer cells. Because the target was restricted to oogenesis and growing eggs, you could come up with a way to selectively target cancers. This is the most important observation. All of those insights are packaged into the IP pertaining to “cancer oocyte neoantigens.” These antigens are showing up in a wide range of tumors, including pancreatic, breast, head and neck, ovarian, and uterine cancers.

Pollok, who is entrepreneur-in-residence (EIR) at UVA, emphasized the key items required to get the company started. “Before negotiating a license, the university insisted there be a team of complementary talents. They wanted somebody to work with Dr. Herr who could not only understand the science, but who also had firsthand experience at biotechnology or pharmaceutical companies and understood how to effectively raise money.” After the A team trio formed, the licensing negotiations began and took only four months to complete. “Relative to other processes I’ve dealt with, it wasn’t a long time,” Pollok says. The university has continued to support the company through access to facilities, contacts, a network of advisors, venture firms, and pharmaceutical companies for advice. “I feel very much a partner with UVA through my CEO role at Neoantigenics,” he adds.

For investors of companies like Neoantigenics, a small amount of capital (i.e., several hundred thousand dollars) can pay large dividends. Neoantigenics essentially runs in virtual mode with no brick-and-mortar. The lab space is all at UVA or at third-party contract labs. Pollok has an office at UVA as part of his EIR role. “The company executes its work either through the university or through third-party contractors,” he explains. He also emphasized the value in looking for unique science (i.e., not ”me too” companies) and for partners who will be transparent and not “hold you at arm’s length.”

WHAT WORKS AND WHAT DOES NOT
Once Neoantigenics had its core team together, it was able to go from term sheet to signed license in four months because the university was realistic about the financial terms it was willing to accept. The university was looking for a payback from the investment in the intellectual property, but it wasn’t looking to soak the new company. In fact, a lot of the up-front expenses were waived. The university didn’t take a huge chunk of the company in terms of equity; it has a single-digit minority stake. According to Leary, requests for ridiculous royalty rates strongly limit an ability to partner with someone down the line because whoever acquires this technology would carry this royalty obligation to the university.

Neoantigenics has a research agreement with UVA that enables Dr. Herr’s lab to continue the science on which he’s been working. UVA also stood to gain from the intellectual wherewithal of the entrepreneur, acknowledging the need for conflictof- interest management. According to Michael Straightiff, managing director, UVA Innovation, Pollok’s appointment as EIR was to UVA proper rather than to Straightiff’s 501(c)3 organization within UVA.

One of the roadblocks to finding early funding was a lack of definition of what the drug candidate should be. The ones who were willing to step in initially were the local angel investors and statesupported funding agencies. Substantial support came from the Center of Innovative Technology (CIT), Virginia Biosciences Healthcare Research Corporation, and the Wallace H. Coulter Foundation. “A total of 60 percent of our seed funding has been nondilutive funding,” explains Leary (nondilutive capital is that which does not affect the ownership of the company).

"The company executes its work either through the university or through third-party contractors."

The initial crafting of the Pfizer deal was focused on the science first and the business second. When Neoantigenics presented to Pfizer initially, they were so interested in the science that they wanted to license the technology outright. Ultimately, however, Neoantigenics decided that they could make the antibody scaffolds themselves. They would raise money, reach out to angel investors, and partner with the best technologies in the world. Using this support, they planned to subcontract research and partner with people with optimal drug payloads. The big partner, Pfizer, remained very interested in the target, and after the company decided to create a start-up, Pfizer decided it also wanted to offer seed funding to the company. Neoantigenics holds extremely valuable working group sessions with Pfizer during which they obtain technical advisement. The arrangement with Pfizer has provided significant in-kind value to Neoantigenics, helping them to raise a total of $2 million (including other funding sources).

THE BALANCE: OPTIMIZING THE BUSINESS AND UNIVERSITY INTERESTS AND INTERRELATIONS
Pollok emphasized the need for a balance in decision making between the company and university, and the need for separation of responsibilities of corporate and university employees. The interrelationship can be synergistic, but checks and balances are important. For example, the entrepreneur should take primary responsibility for any fundraising that requires offering shares, whereas the principal investigator should handle the nondilutive funding that flows through the university. The entrepreneur also should create and manage the budgets in the company. If individuals at the university are left to R&D without oversight, the company won’t get what it needs. Similarly, the company should not be able to go off to do its own thing without some tie-in and critique from the university inventor, who should have oversight of any university staff who are working on the project.

It is important to note that Ph.D. students and postdoctoral fellows are looking to get published for their work for Neoantigenics, which is encouraged by the company. But there has to be a balance between meeting the corporate development goals and the publication goals of the university trainees. An example might be a student wanting to find something novel by spending extra time on a specific project that the company hasn’t directed. Neoantigenics doesn’t want to discourage such research, but it also needs to manage what is contracted with UVA. Furthermore, there is an economic impetus for scholastic research to align with corporate goals as less money becomes available from NIH for the basic research. “To keep these labs doing their research, I think more of this money is going to come from industry,” according to Leary. “Our relationship is with John Herr. He has the obligation with his students to publish and find novel science, but also to meet the goals of the industry research agreement that is funding his lab.”

Leary discussed one very important business optimization question about when to shift the emphasis over to the expertise of Big Pharma. Early on, Pfizer wanted to license the target outright. In that case, it would have set up a research agreement with UVA to get the basic science done. The research would have continued to be done at UVA until it was time to migrate the research out of the university to the pharma company, which would then add its expertise. But Neoantigenics and UVA had more value to gain by taking the science further than it was when Pfizer wanted to license it, acknowledging the risk is the expense. The cost has been ~$1.1 million since the point that Pfizer wanted to license it. So the university has to ask whether the start-up has the management team and the capability to raise the money through grant funding or investment in the company, or are they just going to stall or fizzle out and end up licensing the technology to pharma anyway. It’s the university’s role to make this decision. If the start-up can advance the technology, then there is a greater return for the university because it would end up with a higher royalty rate than it would have had there not been as much science proven as there is now.

"A total of 60 percent of our seed funding has been nondilutive funding."

Dr. Herr has expertise in reproductive biology, characterizing the targets and creating antibodies to those targets. But ultimately the company will need a partner that has expertise in combining or conjugating those antibodies to various effectors such as antibody-drug conjugates (ADCs), chimeric antigen receptors (CARs, artificial T cell receptors are under investigation as a therapy for cancer), or vaccines. Typically, this kind of partner would be a pharmaceutical company. This could be done with Pfizer, but it doesn’t necessarily have to be Pfizer. According to Pollok, “The most likely path is that we develop the IP to the point where we derisk the target biology for the pharmaceutical company partner.” Neoantigenics is well on its way to fulfilling what it had projected to accomplish, which was to raise $2 million and then have the antibody to a specific cancer target by end of 2014.

According to Straightiff, UVA hopes for rapid progress in the partnership of Neoantigenics with the pharma experts for later-stage therapeutic development. “With Neoantigenics we were very fortunate that a very compelling strategic partnership evolved almost immediately. That gives us a great amount of confidence.