How Social Media Might Be Sabotaging Your Clinical Trial

In many ways, social media has been good for the advancement of clinical trials. It is an effective way for pharma to find and recruit patients, make patients aware of trials, and even educate the public on the benefits of trials. It has also become an efficient way for pharma to interact with patient advocacy groups. 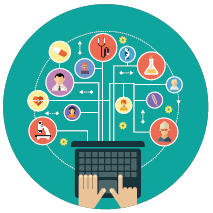 With the numerous groups that now exist for patients with almost any disease or ailment, reaching and interacting with those groups and building lines of communication with them has never been easier.

But for those conducting clinical trials, there is also a dark side to social media. While not a new trend, it is certainly one that is growing and has the potential to impact trials in a negative manner. The problem is study participants taking to social media to discuss their trials, symptoms, and trial medications.

Years ago, it was not possible for patients participating in studies to easily communicate with each other. Even if you had two patients in the same city participating in the same study, it would have been difficult, if not impossible, for them to connect. Social media has quickly changed that. Three trial participants as geographically dispersed as CA, FL, and VT (or even across the globe!) could easily join a discussion group, chatroom, forum, or message board to immediately share details of their trial experiences.

There are certainly advantages to patients having these conversations. Social media provides patients an outlet to discuss their condition with other patients going through the same experience. This helps them feel they are part of a community and can help with retention by strengthening their ties to the trial. However, problems arise when those same patients start discussing aspects of the trial that have the potential to cause patient dropout, introduce bias into the study, or derail the trial altogether.

AM I TAKING THE DRUG OR THE PLACEBO?
Dr. Lindsay McNair used to be naïve regarding the information that trial participants were sharing on social media sites, but she is now very well-versed on the topic. McNair is the chief medical officer and president of consulting services for WIRB-Copernicus Group, a provider of regulatory and ethical review services and software to support clinical research. She also has spent a significant amount of time in pharma performing research and getting feedback from patient communities.

Several years ago when she worked on the sponsor side of the industry, McNair was medical director of her company’s Hep C programs. She was in the process of wrapping up the first of two large Phase 2b studies and starting the second one. One day an investigator called her and asked if she had ever been on the website MedHelp. She had not.

Turns out the site had a Hep C chatroom containing numerous message threads from patients involved in the study. What McNair saw in those messages shocked her.

“I saw posts between subjects in the same clinical study talking about what their pills looked like,” says McNair. “They were also trying to guess who was on the placebo and who was on the active drug based on the taste of the pill. This was a blinded study where no one knew who was getting the new drug. Yet here were patients describing whether or not their pill tasted bitter or neutral and cross-referencing that information with what they learned from other trial participants.”

Some participants were asking others about the physical characteristics of the pill they were taking, including the texture and how it reacted when it got wet. Others shared the lot numbers on the packages they received. In an unrelated study, she learned patients went so far as to crush pills and post pictures of what they looked like in powder form.

“This was a deliberate attempt by study participants to basically unblind themselves,” notes McNair. “Our fear was that once a participant determined they were not on the new drug, there would be little incentive for them to continue with the study. I also saw conversations between subjects regarding side effects. There was talk of side-effect reporting and side-effect management, with some participants actually giving advice on what side effects patients should report to the investigator and which ones they shouldn’t, lest they risk being removed from the trial.”

I’M NOT A DOCTOR, I JUST PLAY ONE ON CHAT BOARDS
If you are concerned about this data being shared, then you better sit down, because it gets worse. One patient noted they had developed a rash but didn’t want to report it. They felt it was caused by the active drug, but since it seemed to be helping with their condition, they didn’t want to risk losing access to the medication. Another patient, who actually stated he was not a doctor, described in great detail how to start on steroids, do the prednisone taper, visit a dermatologist, stop the study drug, try Solu-Medrol if the steroid doesn’t work, and then eventually restart the study drug.

McNair mentions one final bit of information she discovered when researching the comment threads. In the study, participants were blinded to their own HCV (Hep C virus) viral loads. The new drug would give a very different antiviral response profile than the standard of care. The viral load in a patient would drop much more quickly if they were on the new drug. If participants in the study knew they had an undetectable virus between weeks two and four, they were most likely on the new drug. To her surprise, individuals in the Hep C chatroom were advising patients to visit their primary care physician and have their viral load checked. If it was not undetectable by the second week, they were likely not on the new drug and should probably just drop out of the study.

To make matters worse, most of the participants in these chatrooms are anonymous. Therefore, there is no way to know if the individuals making the comments are reporting factual information, if they are with a competing company, or if they are even involved in the study. It should come as no surprise that financial analysts also troll the chatrooms, so as to make predictions on the success or failure of a trial and the stock price of a company, before the trial results become public.

"I saw posts between subjects in the same clinical study talking about what their pills looked like."

HOW DO YOU AVOID THE PITFALLS?
Recognizing that these scenarios do exist is just the first step toward rectifying them. The next step is determining the right actions to take. Craig Lipset, head of clinical innovation at Pfizer, admits there is no easy solution. “The social media genie has been out of the bottle for quite a while now,” he states. “Patients trust other patients and want to learn from their experiences. Even when patients wonder whether or not they should be having those conversations, the feeling is that we are all human beings. It would be difficult for a patient to not share their experiences with others who are in the same position.”

Lipset concedes that if pharma is using online groups and websites to engage patients, those participants will already be Internet-savvy, and the industry would in fact be encouraging those conversations to happen. “It is paradoxical to use the Internet and social media to discuss studies and increase participation rates and then tell patients not to talk about the trial while they are participating in it,” notes Lipset. “Many patients will actually feel a social obligation to share their experiences with others in the community.”

Lipset references the rule of 9’s that exists in social media. It states that for every patient who writes a blog post, nine patients will share it and 90 will end up reading it. That’s a lot of interactions to have to manage, and the implications of those conversations will carry over into recruitment, safety, and reporting. But if patients won’t change, the industry (sponsors, CROs, and researchers) will have to. One approach would be to make the subjective criteria used in studies a bit more rigid and objective. For example, if one person shares that they got a headache from taking the medicine, others might say they got a headache too, even if it had nothing to do with the trial. Focusing on symptoms that can be easily checked or measured would solve that problem.

“Researchers will need to recognize that patient conversations will take place,” notes Lipset. “The industry cannot keep patients from talking to each other and sharing information. It’s time to acknowledge that in the trial planning stage and take necessary steps to ensure these actions will not impact trial results. A few simple steps would be to ensure the two medicines look the same, have the same feel and texture, and do not have a different taste.”

A FEW ADDITIONAL CONSIDERATIONS
Lipset believes better education and communication can also minimize the negative impact of trial discussions. Educating patients on adverse trial consequences and raising their awareness of issues that could arise when discussing their experience is a first step. This type of effort would certainly get the attention of those who are concerned about the integrity of the trial they chose to take part in. Of course, you might also be opening a Pandora’s box of issues by making more naïve patients aware that those conversations exist.

Some companies may go so far as to actually create their own online communities for patients to communicate. This allows sponsors to also participate in an open and transparent manner and to step in and intervene if those conversations become inappropriate. The downside is that patients may not speak as openly and honestly if they know the conversations are being monitored. Additionally, there is still no guarantee those same conversations are not taking place elsewhere.

While there is no absolute solution to this problem, there are some things sponsors should be considering. “At Pfizer, one direction in which we are leaning is around the notion of a risk calculator,” says Lipset. “Not all studies have the same risk stemming from social media interactions. Some communities are very active and engaged, such as Hep C and multiple sclerosis. But in other communities these types of social media interactions are quite rare.”

Different protocols also will have varying amounts of risk associated with them. Lipset concludes by noting that some protocols will carry higher risk because of a more subjective endpoint, whereas others might entail a more measurable diagnostic test. “Understanding the risk level that can be assigned to different trials will allow researchers to focus their efforts on the ones with the highest risk,” he adds, “and then take actions that will help to mitigate it.”

As patients get more familiar with social media, opportunities are created that can be leveraged by pharma. Patient insights can be used to better plan and design studies, understand patient tolerance for the complexity that exists in a study, discover trends related to study recruitment, and understand how we can optimize endpoints to make them more meaningful to patients. The challenge for pharma will be to benefit from the good while lessening the negative impacts as much as possible.