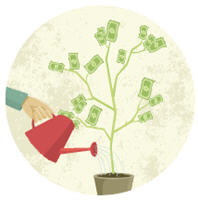 Every year scientists in Janssen’s R&D department make discoveries outside Janssen’s areas of focus. While Janssen recognized the potential of many of these discoveries, it also recognized two obstacles. First, developing these findings would draw resources from current projects, and second, Janssen did not have expertise in these research spaces. In 2010, instead of selling the discoveries, the company decided to allocate a slice of R&D resources to develop a system to select the most-promising targets for further research. The result was a model that had focus, speed, and economy. This was the genesis of the JI.

THE RATIONALE FOR THE INCUBATOR
Sanjay Mistry, Ph.D., head of business operations at the JI and lead of natural product discovery, says, “The JI is an operational model which ensures we do not leave high-value assets on the shelf.” He says it’s an opportunistic approach to create value in science outside of Janssen’s current focus areas. The endpoint of a JI project might be the starting point for NME pipeline development internally. It could also become a startup, a joint venture, or some other entity externally.

“At its simplest level, the JI is an entrepreneurial approach to internal innovation,” says Rob Willenbucher, M.D., head of JI and head of Janssen cell therapy. “It’s a way for us to fulfill the Janssen mission of transformational medical innovation.”

The model is very similar to that found in small venture capital R&D projects. Janssen forms small teams and gives them the resources necessary to meet milestones along the research trajectory. Both the teams and the resources are what Janssen refers to as “ring fenced.” That is, they are dedicated solely to the project. Willenbucher says among the lessons learned is, “The teams can’t be split amongst other priorities, and the teams need to know that the allocated financial investment is there for them.”

Projects are selected annually. RFPs are solicited from scientists within Janssen for promising research projects outside of Janssen’s areas of focus. The selection of proposals is based on a number of factors. For example, leadership looks at the underlying science, the addressable unmet medical need, the ability to identify milestones that have clear association with value creation, reasonable feasibility for success, or whether the project would benefit from the JI model.

During the selection process, there are cases where the science looks very good but feasibility may be low. In one case this year, two scientists came forward with very innovative science, but it was so early that it was hard not only to develop a business plan, but even to define a starting point. In cases like this, the board tries to find a home internally to provide funding to develop the science more fully. When that happens, the plan is to present those projects to the JI again.

The JI leadership knows that scientists most likely do not understand the business or financial aspects of a venture project. So after the first cut through the RFPs, a group of project leaders are selected to attend Janssen’s Entrepreneurial Boot Camp. It is an eight-week educational program to teach a research scientist team leader how to think like a venture capitalist.

Business school professors from the U.S. and Belgium conduct didactic classes and facilitate projects. During the course work, teams develop business plans that include milestones and projected financing requirements. Willenbucher emphasizes the need to identify wellunderstood criteria from the beginning. “Milestones like start and stop dates and anything related to financing have to be clearly defined. The exit has to be explicitly described from the beginning. From the very start, the team has to understand and execute on the goal of achieving the next round of funding.”

During the course, team leaders create and refine “pitch decks,” which they present to the JI board of directors so the directors can conduct due diligence and make informed decisions. “From a business point of view, we want to make sure that, at the end, these projects can stand on their own and meet future market demands,” says Willenbucher.

Currently the incubator has six ventures. Mistry leads a venture based on natural product discovery. There is a venture for autism. A team focusing on lupus is working on two projects, and there is a group researching a novel platform using a nonopioid pain product. A venture team is developing a multivalent biological targeting MRSA, and a team is creating a tool to facilitate the development of drugs that target G protein-coupled receptors.

PROCESS
Ventures are given a period of two to four years to meet milestones and reach their end points. Speed and economy of resources become the guiding principles. The JI places few restrictions on how team leaders reach their milestones. “The scientists get financial support, but they’re expected to run the projects like any business,” says Willenbucher.

Since these projects focus on science which might be outside the expertise of Janssen R&D, a venture may outsource activities. This provides economy by reducing the internal footprint of the venture. It can also speed results, by going directly to an entity that has needed expertise rather than waiting to develop it internally. “Anything and everything that you could potentially do inside, you might do outside,” says Willenbucher.

Team leaders can and are likely to seek partnerships to support their research activities either internally or externally. “As an example of an external partnership,” says Mistry, “one of our ventures is developing a clinical behavioral tool to better understand autism patients and how drugs may impact those patients. There are organizations like Autism Speaks which are very involved with that team. It’s a broad opportunity for both the team and for Autism Speaks.”

In the case of lupus — another science outside the company’s area of focus — Janssen may not have the infrastructure to fully develop a compound. The company would be open to creating a joint venture with an enterprise that did have the expertise and resources. “In other research like early discovery programs such as natural product drug discovery, we’re trying to move promising earlystage discoveries toward lead or NME status. Here, Janssen might partner with external entities to acquire financial support rather than create a full joint venture,” says Mistry.

KEEPING PROJECTS ON TRACK, MEASURING SUCCESS
“Governance is a key aspect of this model,” says Mistry. “Each of these ventures has a board of directors that the leaders report to once a quarter.” During these meetings team leaders present progress reports on their research and discuss plans for reaching their next milestones. The board reviews progress, provides feedback, and offers opinions to the leadership.

The Incubator itself has a board of directors composed of leadership from within the organization. The JI board of directors makes decisions about overall portfolio selection and current portfolio operations. Mistry says, “They answer questions like, ‘Should a project receive continued financing? Should a project be accelerated toward an exit? Is a project doing so exceedingly well that Janssen can capitalize on it now?’”

Governance ensures that a venture doesn’t get off its planned course. Mistry says ventures are created like a start-up so it’s critical they stay focused on their research and the milestones. “We’re very rigorous in reviewing the financial and scientific decisions teams make to advance a program through its milestones,” says Mistry. “If there are challenges, the venture has to decide whether it is investing its resources correctly or whether this research is fruitless.”

“We judge success on the ability of our team leadership to meet milestones and garner additional financing either from within the company, from external sources, or a combination of both,” says Willenbucher. Although none of the projects has yet entered clinical trials, in some cases they’ve entered into preclinical development to do IND (investigational new drug)-enabling work. One of the lupus assets has been taken into product development, and the team is in some initial discussions with potential strategic partners.

ADVICE AND LESSONS LEARNED
“The essence of entrepreneurship is the creative use of resources,” says Willenbucher. Biotechs and small research ventures have been successful in the discovery of NMEs with limited resources. He says the incubator model adopts the advantages of that entrepreneurial model while providing the breadth and expertise of a large R&D organization.

Willenbucher says the model is the vehicle, but the most important thing is finding scientists who are passionate about their project. Not every scientist or discovery is suited for this model. “Leaders operating under funding and time constraints will find the fastest and best ways to reach value inflection points,” says Willenbucher. “The totality of the experience is that it drives the engagement of team leaders, and because of that, projects move very quickly. That’s good news for innovation."