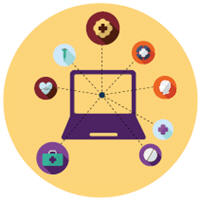 The failure rate of new drugs is alarming, particularly in Alzheimer’s disease, with a recent review of Alzheimer’s drug clinical trials from 2002-2012 reporting a success rate of 0.4 percent.

Clearly, there seems to be a translational disconnect between preclinical animal models and clinical outcomes, especially in disorders of the most complex organ in the human body — the brain. But some pioneers are embracing a technology that makes use of vast new data libraries and innovative approaches to identify viable candidates more efficiently than ever before.

AVATARS
The word avatar conjures images of blue hybrid human-aliens in movies or the cartoon vaguely resembling you in a video game. But this is a much different take: a digital human avatar, or virtual human patient, that could address the issue of personalized medicine, allowing new medications to be extensively tested in silico before they enter into human trials.

A virtual patient sounds a bit farfetched, but it’s really a new application of a traditional concept. “We looked at how other industries — chemical engineering and aeronautics — deal with new problems by using advanced modeling and simulation as much as possible. By prototyping in silico before building, their success rates are much higher than in pharmaceutical R&D,” explains Dr. Hugo Geerts, chief scientist at In Silico Biosciences (ISB), a small company founded in 2002 based on the concept of quantitative systems pharmacology (QSP). With QSP, advanced computer modeling of biologically realistic neuronal networks is used to simulate the impact of digital pharmacological interventions on emergent properties.

Dr. Geerts is no stranger to the use of predictive modeling and simulation in drug development. His years of experience in drug discovery and development in Alzheimer’s disease with the legendary drug hunter, Dr. Paul Janssen, (along with degrees in theoretical physics, medicine, and biophysics) put him in the perfect position to develop the technology for extremely complex CNS research. “A lot of academic work over the last 70 years has been done in computational neuroscience. Alzheimer’s was a great area to start.”

With the goal of reengineering drug discovery operations for CNS diseases, Dr. Geerts and his colleagues at ISB created a humanized computer-based integration of physiology and pharmacology knowledge, molding existing information into a pharmaceutical research tool. In contrast to bioinformatics, they introduced the expertise of neurologists, neurobiologists, and neuropharmacologists into the platform. Timing of action-potential firing is calculated as electrical activity of specific brain regions that drive human behavior. The result is a virtual human patient, a platform on which they can test pharmacological activity of a new drug to predict how it might perform in human clinical studies.

“In 2002, the idea was far too hypothetical and far-fetched,” Hugo muses. Biologists didn’t believe this was viable, and, because it fell between the categories of academic and real-world projects, his team was unable to secure NIH grants or other financial VC support.

At present, ISB has worked with about 10 companies, ranging from Big Pharmas like Roche and Pfizer, to small and midsize companies, and non-profits (including the Michael J. Fox Foundation), with success stories in which their methods have been used to predict clinical outcomes.

FINANCIAL (AND SAFETY) BENEFITS OF MODELING AND SIMULATION
Simply put, the technology improves trial design because its results are often closer to clinical reality than those extrapolated from preclinical animal models. According to Dr. Richard Peck, global head of clinical pharmacology at Roche, “More realistic modeling means trials can be designed better, with increased efficiency and reduced costs, leading to better outcomes. There’s less waste on failures, and trials are safer.”

Success rates with the ISB platform include two blind and prospective predictions of Phase 2 clinical outcomes in schizophrenia and a correct but unexpected clinical Phase 1 proof-of-concept prediction for a new compound in Alzheimer’s disease:

DRUG INTERACTIONS
Though it may seem counterintuitive for some, virtual human patients can provide much more realistic predictions with comedication simulation. Dr. Geerts says, “In rodents, we take the rather naïve approach of testing one drug at a time. With advanced modeling, we can take multiple medications beyond the test drug into account.” For example, Alzheimer’s patients often take a myriad of drugs (sleep aids, antidepressants, antipsychotic drugs for behavior, etc.), resulting in many complex interactions, which rodent trials simply cannot replicate.

"I suspect many drugs that appear to fail actually do work, but only in a subset of patients."

Currently, an ISB test platform can accommodate up to six different drugs and can include four different common human genotypes that have been shown to affect clinical outcomes. Without advanced modeling, clinicians may not be able to predict adverse comedication reactions or the impact of the genotypes, with the potential for putting patients at risk and failing trials.

RIGHT TARGET(S), RIGHT PATIENT(S)
Researchers from AstraZeneca recently performed a review to understand the major reasons for project termination over a five-year period. They identified the importance of “right target” and “right patient” as features of projects that correlated with successful outcomes.

Along these same lines, Dr. Geerts postulated that the high degree of failure in CNS trials may be a result of the “extreme complexity of the human brain neurobiology, and … that the clinical outcome is driven by emergent properties of neuronal circuits, rather than by a single target.” It’s highly unlikely that affecting only a single target in this complex network of interacting circuits can result in major clinical change; hence the need to start considering rationally designed polypharmacy early in drug discovery. The mechanism-based computer model, constrained with clinical data, can help scientists understand these complex interactions because the biological rationale and assumptions are clearly formalized.

Beyond the complexities of the “right target(s),” variability between patients is a tremendous challenge in drug development. Modeling has shown that some Alzheimer’s patients progress more rapidly, while others progress slowly. “Here’s a case where we can use modeling to define the patient population we should be treating: the fast progressors,” Dr. Peck says, adding, “If all the patients are put into one category, there’s a high probability that the study will fail to find the effect of the drug, because the benefit in high progressors might be masked by the noise from the lack of benefit in slow progressors.”

He says, “I suspect many drugs that appear to fail actually do work, but only in a subset of patients, and we have not found that subset. Modeling will increase success rates because we’ll better understand which patients should be getting the drugs. By studying our drugs in those patients, we’ll find efficacy rather than missing it.”

The QSP platform helps identify possible reasons for failed clinical trials to avoid repeat mistakes (another common engineering principle). By simulating the individual trial patients, the platform can examine whether the dose was optimal, whether there was an imbalance between treatment in patients’ comedications or genotypes, or whether the drug’s off-target pharmacology affected the clinical readout.

PATH TO ACCEPTANCE
Though early adopters are finding success, there are hurdles to overcome in the industry. Dr. Geerts cites fears associated with lack of biological knowledge to parameterize the computer model and, surprisingly, a fear of advanced mathematics among some biologists. He says, “We know about physics and engineering principles, but people say we don’t know enough about human brain biology to make a model.” Though we have much to learn about human biology, he feels that the available information is not used to the fullest extent in traditional trial design. “Engineers didn’t wait for the Grand Unified Theory to develop extremely useful tools.”

The ISB team encourages scientists to formulate their own hypotheses to be implemented into the mathematical platform. “In this regard they start owning the model, which is crucial to broader acceptance of this technique and is more difficult to achieve with the more traditional ‘hypothesis-free’ and relatively abstract approach of bioinformatics.”

Timing is important. Modeling provides the most value when it’s used early on, preferably at the point of target validation. He explains, “Sometimes we come in on a project and predict that the compound needs a certain dose, but it doesn’t match with what the company determined based on rodent models. Our predictions are often closer to reality than the extrapolations of rodent models, so it makes sense to start modeling early.”

The approach was presented at the 2015 NIA Disease Research Summit, and the working group has a toolbox for new adopters in the works, with plans to publish a series of papers outlining the challenges and possible solutions in the near future.

FUTURE STATE
As acceptance grows, Dr. Geerts sees the potential for personalized medicine beyond drug development. Imagine your doctor creating a model that takes your unique information (genome sequences, imaging, biochemical lab work, etc.) into account. “Our ultimate goal,” he says, “is to create an individualized mechanismbased human avatar based on ‘pan-omic’ data, where we could systematically test all available therapeutic interventions to find the best treatment with the best benefit-risk ratio.”

Does the technology sound revolutionary? Sure. But so did most of the modern tools we’ve come to rely on. For now, with companies risking billions of dollars on development, the need for cheaper, faster, and safer trials has never been more urgent. By using virtual patients to test real-world scenarios on the right patients and the right targets, trials can be designed better, resources can be allocated appropriately, and attrition rates can be reduced.