Targeting a common amyloid structure of misfolded proteins in neurodegenerative diseases such as Alzheimer’s, Parkinson’s — and perhaps many others 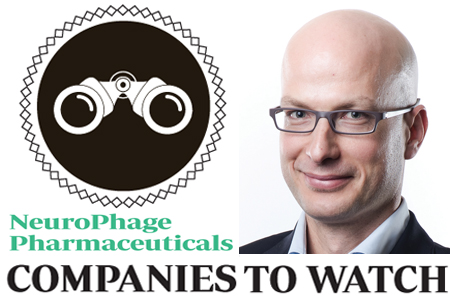 NeuroPhage Pharmaceuticals is developing a novel approach to treating a number of disorders associated with protein misfolding, such as Alzheimer’s, Parkinson’s disease, and amyloidosis. Lead candidate NPT088 is based on the company’s GAIM (General Amyloid Interaction Motif) technology, targeting and remodeling multiple toxic, misfolded proteins (Aβ, tau, α-synuclein) for clearance by the body’s natural mechanism.

WHAT’S AT STAKE
When proteins misfold, many of them do it in the same way — aggregating to form amyloids all defined by a common structure, or “conformation.” Amyloid formation can occur in any organ, and it is responsible for a wide range of diseases throughout the human body. According to NeuroPhage CSO Dr. Richard Fisher, a particular bacterial virus, or bacteriophage, holds the key to blocking the misfolding process, a mechanism for eliminating amyloid assemblies.

“We started by trying to figure out how this particular virus can have amyloid-targeting activity,” says Fisher. “After several challenging years of investigation, during which we were learning how to develop a phage into a drug, we located the piece of protein on the phage apparently responsible for all the activities we observed, which include improving the condition of transgenic mice that model neurodegenerative conditions, such as Alzheimer’s and Parkinson’s. Those diseases are characterized by multiple misfolded proteins — usually not just one culprit — and with our approach, we can potentially target multiple misfolded proteins simultaneously.”

Turning a bacteriophage into a drug was no easy task, NeuroPhage invented its own technology, GAIM, which mates the protein fragment to an antibody fragment, called an Ig-GAIM fusion, that neutralizes and mediates the elimination of the toxic amyloid plaque. The NeuroPhage drug does not discriminate by initial cause — misfolded proteins occur naturally and accumulate with age, or they can pile up much faster with pathological or genetic stimulus. What the drug essentially targets is the propensity of amyloids to act as a template for further misfolding, accelerating their own replication like a spreading fire. A second GAIM activity is binding to smaller aggregates, called oligomers, which can kill neurons outright; it remodels these structures into a nontoxic state. In the mouse models, says Fisher, treatment appeared to clear brains of up to 70 percent of amyloid plaque. “Now we have a new molecule that’s very drugable — it can be given systemically, stays sufficiently long in the blood, and reaches the brain in the portions required.”

CEO Jonathan Solomon says NeuroPhage plans to enter human trials by the end of 2015. Thus the company is poised at the edge of a classic test — going from preclinical models to proof of concept in humans.

One required element for approval of any brain-targeting neurologic drug is the ability to image the key biomarkers in a PET (Position Emission Tomography) scan. Several imaging agents for the two main aggregates in the Alzheimer’s brain, amyloid beta, and amyloid tau now exist. Dr. Franz Hefti, NeuroPhage’s current president and COO, previously played a key role in developing the imaging agents the company is using in its first human trials.

NeuroPhage has “a few very deep-pocketed investors,” according to Solomon. Those include the venture arms of Merieux and Shire, as well as private individuals. “We can finance the company through completion of the imaging study, but another investor or going public could take us considerably further.” Solomon notes a surge in the momentum of neuroscience development, attracting more attention from funding sources — and perhaps one new area stealing some of the thunder from cancer.