With cost and regulatory pressures on drug manufacturers continuing to increase, it is not surprising that growth of the global CRO and CMO markets is healthy (9 percent and 6.4 percent CAGR, respectively). According to market research firm TechNavio, today’s greater demand for CRO services is due in large part to the increase in outsourcing of biopharmaceutical drugs and R&D activities by both pharmaceutical and biopharmaceutical companies.

Meanwhile, Mordor Intelligence predicts that the value of the global CMO market will increase from $58 billion in 2014 to $84 billion in 2020, with APIs accounting for the largest share. Formulated products, however, will grow at the fastest rate due to pharma and biopharma companies focusing on the discovery and development of new drugs rather than on manufacturing.

The trends noted in these market research reports are in line with the results obtained from Nice Insight’s annual Pharmaceutical and Biotechnology Outsourcing survey of more than 2,300 outsourcing-facing pharmaceutical and biotechnology executives. The survey respondents’ changes in spending on CMO/CRO services clearly reflect the market growth discussed above. While the percentage of survey participants whose companies spend more than $50 million on outsourcing has remained fairly stable over the last three years at 23 to 24 percent, the percentage of respondents whose companies spend $10 million to $50 million on outsourcing has increased dramatically from 38 percent to 62 percent, while the percentage of participants whose companies spend less than $10 million has decreased by slightly more than half. Furthermore, regardless of the buyer group or budget size, the average number of services outsourced by survey participant companies increased from 2014 to 2015.

"It is interesting to note that large and emerging biotech companies are now outsourcing nearly as frequently as Big Pharma and generally more often than emerging pharma at the discovery, preclinical, and Phase 1 stages of drug development."

Similarly, the survey results reflect the growing importance of biopharmaceuticals to the overall drug industry. The percentage of survey participants whose companies are engaged in the development of biologics has increased from 65 percent in 2013 to 82 percent in 2015. In addition, the percentage of outsourcing budgets spent on biologics vs. small molecule therapeutics has risen from 54 to 58 percent over the same period.

Those services are used during all phases of the drug development process, with the largest percentage of respondents (60 percent) relying on CROs and CMOs during the preclinical phase, followed by phase I (56 percent), discovery (49 percent), Phase 2 (42 percent), Phase 3 (29 percent), and Phase 4/post-launch (22 percent). Of course, the lower values for later stages of drug development can in large part be attributed to the fact that vastly fewer candidates make it that far through the process.

It is interesting to note that large and emerging biotech companies are now outsourcing nearly as frequently as Big Pharma and generally more often than emerging pharma at the discovery, preclinical, and Phase 1 stages of drug development.

According to the Nice Insight survey, the top services respondents expect to outsource in the coming 18 months include clinical research, analytical services, biomanufacturing, biostatistics, packaging, and data management.

When choosing which CRO or CMO to spend their money on for these services, 67 percent indicated they rely on industry research. Consultants (59 percent) and referrals (54 percent) were the next most popular methods used to select outsourcing partners. In addition, to ensure quality, sponsors are using more methods to identify new partners, with the average number of sources increasing from 2.5 in 2013 to 3.0 in 2015.

KEY ATTRIBUTES OF OUTSOURCING PARTNERS
CROs and CMOs should take note that for the third year in a row, quality and reliability remain the number one and number two priorities for sponsors when they are looking for outsourcing partners. Productivity is also an important attribute and has steadily moved up in the rankings from fifth to third place from 2013 to 2015, likely reflecting the need for pharma and biotech companies to increase efficiencies and lower costs across all activities. In addition, when selecting CROs and CMOs, survey participants indicated that sponsors are looking for service providers that have a track record of success and financial stability. Nearly as important are operational, methodological, and therapeutic experience and the ability to be adaptable and flexible in order to meet project needs.

When it comes to soft traits, respondents to the survey prefer CROs and CMOs that have demonstrated good communication and transparency when doing business, combined with an industry reputation for doing quality work and understanding the needs of their customers. Service providers that are also known to be responsive, willing to go the extra mile to ensure success, able to implement sponsor methodologies, and eager to foster good rapport among the members of their project teams will also receive extra attention according to survey participants.

Poor quality continues to be the top source of dissatisfaction for survey respondents, followed by a lack of timeliness in resolving problems and unexpected charges. The latter is again surprising given the lack of emphasis on cost when selecting CROs and CMOs, but it does fit with the fact that survey respondents consider cost-effectiveness a key performance attribute.

Clearly, the survey results indicate that CRO and CMO use is increasing and that those service providers with proven expertise and a demonstrated ability to deliver high-quality materials on time and cost-effectively will have the greatest opportunity to leverage that trend for increased success. 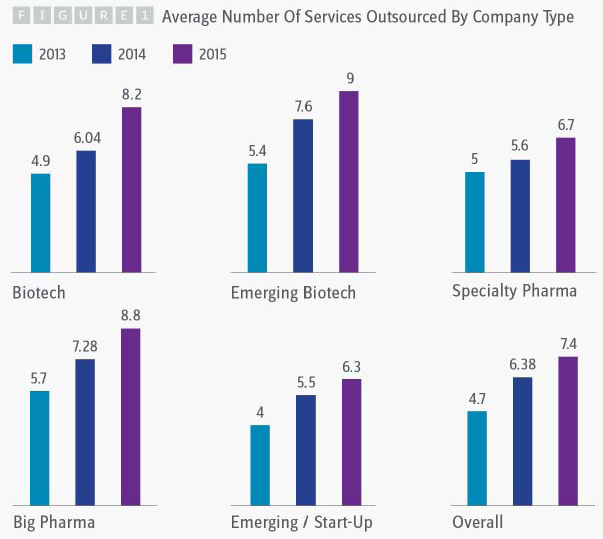 Survey Methodology: The Nice Insight Pharmaceutical and Biotechnology Survey is deployed to outsourcing-facing pharmaceutical and biotechnology executives on an annual basis. The 2014-2015 report includes responses from 2,303 participants. The survey is comprised of 240+ questions and randomly presents ~35 questions to each respondent in order to collect baseline information with respect to customer awareness and customer perceptions of the top ~125 CMOs and ~75 CROs servicing the drug development cycle. Five levels of awareness, from “I’ve never heard of them” to “I’ve worked with them” factor into the overall customer awareness score. The customer perception score is based on six drivers in outsourcing: Quality, Innovation, Regulatory Track Record, Affordability, Productivity, and Reliability. In addition to measuring customer awareness and perception information on specific companies, the survey collects data on general outsourcing practices and preferences as well as barriers to strategic partnerships among buyers of outsourced services.

If you want to learn more about the report or how to participate, please contact Nigel Walker, managing director at Nice Insight, by sending an email to nigel@thatsnice.com.