Remote Clinical Trials: A Goal Just Over The Horizon

People don’t think twice to pay bills on a smartphone, share experiences on social media, and even monitor sleep habits on wearable activity trackers. But when it comes to participating in a study to test a new therapy or medical device, we might as well be standing in line at the bank to deposit a paper check. 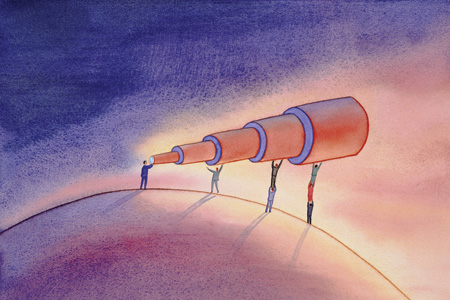 Clinical trials today look pretty much the way they did 25 years ago, with patients required to make regular trips to clinical research sites for in-person testing and hand-entered data collection.

Conducting remote clinical trials, by contrast, would bring the antiquated process into the twenty-first century, providing the kind of convenience and cost-saving efficiencies that other industries now take for granted. Study volunteers could report their data from home via mobile technologies directly to systems that would gather and analyze the figures in real time, while researchers could interact with patients via online portals to ensure they stay engaged and active.

Such an approach, while feasible, is still years off, most experts say. “The remote clinical trial seems a little bit like the horizon, an imaginary line that moves farther away the closer you get,” says Andreas Koester, VP of clinical trial innovation at Janssen Pharmaceutical Companies, a part of Johnson and Johnson.

That’s not to say we’ll never get there. Koester expects to see a much broader adoption of mobility technology in the trials process over the next three years. “The tipping point is almost here,” says Koester, an R&D veteran who also serves on the operations committee at TransCelerate BioPharma, a nonprofit organization working to find solutions to industrywide R&D challenges. “Every day you see some company piloting individual aspects [of remote technology/ components] into trials. That’s the way innovation works. You start by utilizing remote technology for individual aspects, and in doing so, you learn what process changes are required.”

“So far all of our expectations have been exceeded,” says Kai Langel, cofounder of eClinicalHealth. “The patients appear to be more compliant than those in a sister trial that was done on paper. That’s really impressive because these patients used to get one-on-one instruction from the patient site. Now they do all of that online, and they’re doing better than they did in the previous study.”

But that’s not to say everything went perfectly. One of the biggest challenges the trial faced initially was educating some less-than-computer-savvy volunteers. Simple things, such as finding an email with the account activation link, required additional support. “If you have a big study and you put all of this burden on the trial site, then it’s a lot of work,” Langel acknowledges. “It’s important that sites have the right kinds of partners that can take over some of this routine management.”

But once these details are covered, the advantages of remote trials are obvious. First, there is the convenience this model provides by removing the burden of taking time away from work, school, or family life to visit a research site. And second, counter-intuitively, is the ability of the technology to make volunteers feel more connected.

With traditional clinical trials, “Either there are too many visits, and it’s a big burden, or there are too few visits, which makes the volunteer feel completely disengaged, and they don’t see why they should continue with the trial,” Langel says.

Another key advantage is the ability to monitor data in real time and make corrections where necessary. For instance, a patient may have to take measurements at very specific times during the day. With the remote technology, Langel explains, sites can see when someone is doing something wrong with the glucose monitor, such as taking the measurement too late after lunch. “Now we can actively reach out and manage them in real time. We can contact them and say, ‘Hey, Mr. Patient, we’re seeing you’re doing your measurements 15 minutes too late. So will you please change your schedule or measurement time a little bit, and then you’ll be fine,’” Langel says. “In a traditional trial, that kind of problem would be detected in the next visit, and then it would already be too late because all of that data would have been taken at the wrong time, and you couldn’t use it.”

FILLING IN THE “WHITE SPACES”
That point is echoed by Janssen’s Koester. Clinical trials today only capture a snapshot of the patient’s health during the office visit — a snapshot that researchers hope will give them an idea about the patient’s condition over time. “It’s quite a crude measure, and it’s something that exists because we didn’t have anything better,” Koester says. “With the advent of devices [e.g., smartphones], we have the ability to fill the ‘white space’ between the snapshots and really measure the continuum of the patient’s condition and the influence of diet, lifestyle, and other parameters, which are right now considered to be imponderables on the evolution of the patient’s condition.”

Take rheumatoid arthritis, for example. In an office visit, a doctor can measure swelling, physical function, and inflammation parameters. With remote technology, a researcher could measure improvements in pain and inflammation, as well as improvements in physical activity and the ability to do certain things at home. “Right now we have to rely on patient-reported outcomes, which are a good, but still subjective, parameter,” Koester says. “Now we have the opportunity to measure the impact [of the treatment, drug, etc.] on the patient’s life.”

And highly sophisticated technology exists to do this. Variable sensors and devices exist that can measure everything remotely from blood pressure to blood glucose levels. One in 10 adults in the U.S. already carry a Fitbit or similar device. And there are plenty of technology companies today aimed at providing these services. For example, simple devices are available that don’t require the use of a blood pressure cuff, which can be error prone, Koester says. You simply press two fingers on a little device that takes your measurement. And because it happens in a relaxed home environment, the reading is much more accurate than a measurement taken in a doctor’s office, where patients often have elevated blood pressure due to anxiety and other factors. “If we had validated all of the systems, a blood pressure trial could be one of the first to be run completely remotely,” he says.

MAINTAINING PATIENT-RESEARCHER RAPPORT
Ken Getz, associate professor and director of sponsored research at the Tufts Center for the Study of Drug Development, says interest in remote trials is part of a broader patient-centricity movement to support patient engagement, improve convenience, and increase a patient’s feeling of being a partner and active participant in the study. “Companies are really testing and considering a whole host of approaches to try and see if they improve completion and retention rates,” he says.

"Right now we have to rely on patient-reported outcomes, which are a good, but still subjective, parameter."

But Getz cautions that designing trials in a way that eliminates face-to-face interactions could damage the patient-investigator rapport that is critical to clinical research. Volunteers could lose interest and drop out. “Interfering with that relationship between the study staff and study volunteer is something we have to treat very, very carefully,” he says.

The goal, Getz adds, is to design a study in such a way that you can get the face-to- face meetings at critical junctures, and where you can also collect data on an ongoing basis using remote technology.

BENDING THE $2.6 BILLION R&D COST
As in other industries, cost factors may ultimately drive change in the clinical trials arena. Bringing a drug to market now costs roughly $2.6 billion and requires a 10-year R&D commitment, according to the Tufts Center. The biggest cost drivers in a clinical trial are the office visits. “If we can do that not just remotely, but in an automated way, you save on checking and double checking for manual entry errors,” Koester says. “I think it is easy to see that there is a huge potential for cost savings.”

But those savings are actually just a nice side effect for Koester. The real driver behind remote trials is making the experience easier and less burdensome for patients, and in doing so, increasing access for the general population to clinical trials.

Langel agrees that cost savings alone is not the key selling point to the approach. Nevertheless, potential savings are closely linked to the convenience the trials provide. “Because the study is more attractive to patients, and they’re less likely to drop out, you can start your study faster, you can get patients through the study faster, and you can wrap things up faster, so that will save you operational costs,” he explains. “The average operational cost is about $1 million per month, so if you can wrap things up one month earlier, that’s $1 million in the bank.”

Conversely, you can tell quickly if the trial is not working. “So instead of running through the whole thing and saying, ‘Whoops, we’ve just spent $500 million, and this is not working,’ you can do that after the first month and see which direction things are going.”

ONUS IS ON PHARMA COMPANIES
While the advantages of remote trials seem obvious, change comes slowly in the ever-cautious pharmaceutical industry. A widely watched remote clinical trial started by Pfizer in 2011 folded a year later due to a lack of volunteers. Langel asserts that Pfizer’s use of multiple mobile and Web-based platforms made it difficult to identify and recruit patients. This problem can be addressed, he added, by using one integrated site for various tasks, including patient recruitment, electronic informed consent, patient communications, and patient-reported outcomes and measurements.

Getz says there was initial excitement around the Pfizer study, and that its failure to enroll study volunteers has caused people to rethink their initial exuberance. “There is much more caution now than we saw 18 months ago as the realities and challenges of implementation really begin to present themselves,” he adds.