When recently promoted Takeda CEO Christophe Weber announced in the spring of 2015 that his company was determined to become a global leader in gastroenterology (GI), John Puisis, just a few miles from Takeda’s offices in Deerfield, IL, straightened up in his chair. As CEO of Cour Pharmaceutical Development Company, Inc., Puisis had already entered discussions with some pharma companies about Cour’s nanotechnology platform aimed at a GI-related disease.

“It was a clear mandate from one of pharma’s newest CEOs,” recalls Puisis. He had just returned from an international conference in Prague, where his company presented clinical data on a model targeting currently incurable celiac disease. About a month later, in May, Takeda let Cour know they, too, were indeed interested in the technology. Senior-level discussions with Takeda quickly took precedence over the other pharma negotiations and led to “a very rigorous process of due diligence.” That culminated in December with an announcement of the industry’s newest pharma-nanotech partnership.

“You know what was interesting?” asks Puisis. “Their immunologists and particle experts just got what we were doing with our nanotechnology. There wasn’t much of a learning curve.” In fact, Takeda is one of a growing list of pharmaceutical companies more actively pursuing the application of nanotech to biology to develop nanomedicine for targeted diseases.

Vincent Ling, senior director for Takeda New Frontier Science (NFS), a group also formed as a part of CEO Weber’s strategy to enter new therapeutic areas and pursue new scientific approaches, is tasked with finding technologies to enhance the company’s innovation in drug discovery and development. Ling says, “While nanotech as applied to medicine is relatively new, and much of it still in the science mode, it’s going to be fascinating to see where it leads us. I have a feeling that we will end up with applications we haven’t dreamed of yet.”

DREAMING BIG FOR CELIAC DISEASE PATIENTS
Actually, Ling’s NFS didn’t introduce Takeda to Cour … for a very good reason. NFS is focused on emerging opportunities, but the Cour nano-application to celiac disease had already advanced sufficiently and, as such, was on the radar screen of Takeda’s GI group. Of course it didn’t hurt that Takeda has been a leader in micro-particle delivery of proteins, starting some 20 years ago with the blockbuster drug Lupron Depot. Puisis puts it this way: “The translation of the Cour technology to a product is real. This is not the kind of collaboration where we’ve been working with Takeda for a dozen years trying to come up with a product. We have a realistic, short, game plan. It’s about making a product utilizing nanotechnology and getting it to patients.” 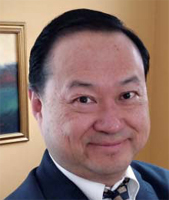 "When we talk about nanoparticles, I see such a wide variety of different structures, types of chemicals, and nanotechnology surfaces; it’s almost broader than biotech."

Cour’s technologies reveal the three paths of nano in drug development. The first — and current path — is using nano drug-delivery systems with often highly toxic drugs encapsulated in nanoparticles, or nano “cages.” The second path, still somewhat in the future, is nanoparticles actually becoming the drug, or at least drug-like. The third path connects the first two and is the one we are steadily heading down, as the science increasingly reveals that the nanoparticle itself has mechanically programmable biological effects in the human body. “I have to always be clear about what I am talking about,” says Puisis, “because my scientists say, ‘The nanoparticle can be more than a carrier … it’s an agent in and of itself.’”

To fight celiac disease, the Takeda-Cour approach starts with the straightforward use of a nanocarrier housing a protein. The disease is an autoimmune disorder of the small intestine, and it can occur in people of all ages, including infants. It can cause severe pain and discomfort in the digestive tract, chronic constipation and diarrhea, and other symptoms. Most commonly, celiac disease is caused by a reaction to gliadin, a gluten protein found in wheat. And the protein the Takeda-Cour nano-carrier encapsulates? That very same gliadin. But Cour has found “a back door into the immune system,” and with it a method to stop the body — specifically our T-cells — from attacking the protein and causing the disease.

In short, a nanoparticle filled with gliadin hitches a ride to the spleen (the “back door”) on monocytes circulating in the blood. Once there, the gliadin is released. Instead of attacking the protein there, the T-cells start to recognize it as part of the body. “This reprograms the immune system and the painful inflammatory response, in a very elegant way, and without using any immune suppression,” says Puisis.

Pre-nano, and for decades now, the pharma industry has dealt with inflammation and immune responses with immune suppression attempts and particularly cortisol steroids. According to Puisis, for patients with an inflammatory flare-up or an adverse immune reaction, “It’s this pretty old technology that usually stuffs and suppresses your immune system. Unfortunately, this comes with a slew of side effects, and in fact it’s archaic.” Puisis adds, “There’s no cure for celiac disease nor good therapies. Doctors simply recommend a gluten-free diet, but that doesn’t solve the issues around celiac disease. We’re working so nanotechnology can help deliver the first therapeutic remedy for celiac disease patients.”

CELL ENCAPSULATION CAPTURES ATTENTION
Takeda’s Ling has had nanotechnology in his sights for years. He has a broad background in biotechnology, with experience in genetic engineering, medical biotech, embryonic stem cells, genomic sequencing, gene chips, and checkpoint inhibitors. “But what really changed my life,” says Ling, “is work I did on cell encapsulation. It led me to understand it’s not all about the drug. The delivery is a major part of the equation.”

Ling recognized early that because cell encapsulation could protect us from our own immune systems, we could better utilize the newer science of converting recombinant cells into tiny bioreactors by implanting them directly at the site of a disease. “The question,” says Ling, “was how could we best shield these cells from an immune attack? The answer is with transformative surfaces made with new biomaterials. That takes place at the nano scale and with the promise of nanotechnologies for immune evasion.” In fact, says Ling, Takeda recently announced it was funding a “biotech” company — Providence, RI-based NsGene, Inc. — to continue to develop cell bioreactors with nanosurfaces allowing for drug elution and targeting Parkinson’s disease.

The New Frontier Science group is headquartered in Takeda’s offices in Cambridge, MA. Including Ling, it has a core of 10 entrepreneurial scientists dispersed around the world, particularly in the U.S. and Japan. I asked Ling if, with his company’s background in micro-particles and the new relationships with Cour and NsGene, he believes Takeda is developing a specific nano-strategy. “I can say we’re interested in any technology platforms that could mutually benefit our pipeline of chemicals in development. If a nanoapplication would be beneficial, we won’t hesitate to take a look. However, at this point, I don’t think we’d put nanotechnologies first and then try to fit a drug around that. Takeda is a drug discovery company first, and it’s the molecule that drives the process.” Having said that, though, he adds, “I think nanotechnologies will be very good for disease areas such as oncology — also a Takeda disease focus — where the nanoparticle structures can shield the chemotherapy agent from being too toxic and delivering it to a more precise location.”

NANO IN TAKEDA’S DNA?
Takeda, although a global company, might also benefit from its Japanese roots when it comes to nanotechnology. Having spent over 30 years closely following technologies in Japan, I like many others, know the Japanese have advanced nanotechnology as much as any other country. For example, Ling tells me about a “hot-selling” cosmetic skin product (described as anti-aging care for the skin) in Japan called AstaLift from FUJIFILM Corp. “It’s based on antioxidant nanoparticles. It’s a semisolid gel that looks like a jelly, but is really a container of nanoparticles. I was blown away that even the Japanese cosmetic industry is using nanoparticles.”

Is there nanotech in Takeda’s DNA? Ling smiles at hearing the question, and says he believes, for example, Takeda’s new Lupron Depot (six-month) formulation of microparticles (which are precursors to nanoparticles) is a step ahead of many others without these types of products.

So, does Ling foresee Takeda with a future nanotechnology division? He replies that it may not be so much about internalizing nanotechnology as letting it develop externally. “Takeda is devoting itself to the idea of spinning off companies based on new technologies, including those discovered outside. As a pharma designed for drug discovery, at times it’s best to fund an alternate modality, so it can grow externally, before integrating it into our pipeline. I think that’s a view of nanotechnology we can entertain for the future. When we talk about nanoparticles, I see such a wide variety of different structures, types of chemicals, and nanotechnology surfaces; it’s almost broader than biotech.”

Perhaps a few more CEOs of nanotechnology companies have just straightened up in their chairs.