A determined young company revisits a discarded mechanism and finds a new path to broad-based therapeutics for cognition-related diseases such as Alzheimer’s. 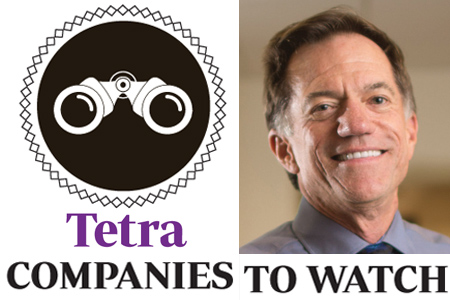 Tetra is developing a new class of phosphodiesterase 4 (PDE4)-inhibitor drugs to treat patients with a wide variety of “cognition-impairing” conditions. Its lead product, a PDE4D inhibitor (BPN14770), will enter Phase 1 human trials in Alzheimer’s disease this year, and two other pipeline candidates are PDE4B inhibitors in preclinical development for treating neuroinflammation and traumatic brain injury.

WHAT’S AT STAKE
Bringing a new brain-affecting drug to practice requires overcoming a lot of scientific skepticism from past failures. Tetra’s CEO Mark Gurney gathered a team of researchers to take a new look at PDE4, part of a chemical mechanism of memory in the human brain. Previous cognition-enhancing drugs designed to modulate the pathway by inhibiting PDE4 had the side effect of overwhelming nausea, which had discouraged and essentially ended further development. For Tetra’s lead compound, BPN14770, the company focused on the single subtype associated with the side effect, PDE4D, and found a potential way around the problem.

“PDE4D exists in one of two states, an off-state in which it is partially inhibited, versus a phosphorylated, on-state in which it is fully active,” Gurney explains. “Since the drug has little effect on PDE4D in the off-state, it has very good tolerability. Our team was the first to solve the crystal structures of the PDE4 regulatory domains, the first to exploit the negative allosteric mechanism, and the first to develop PDE4 subtype-selective inhibitors based on this new knowledge.”

PDE4D affects the entire cAMP (cyclic adenosine monophosphate) signaling mechanism, giving Tetra’s approach another advantage, according to Gurney. “BPN14770 potentiates cAMP signaling while maintaining the spatial and temporal patterning of information flow through brain circuits important for memory. As BPN14770 does not address a specific neurochemical deficit or disease pathway, it will have broad cognitive benefit across multiple neurologic and psychiatric illnesses.”

Still, the company inevitably faces a steep uphill battle to overcome the lingering doubts of investors and prospective partners. It has adopted a “hybrid financing model” with substantial support from the NIH Blueprint Neurotherapeutics Network (BPN) to fund and conduct its R&D program.

“Through the BPN, Tetra received not just funding but also access to a network of industry professionals with deep knowledge of all aspects of drug discovery,” says Gurney. “This meant we did not need to go it on our own, but instead, and from the outset, had a remarkable team working toward the goal of delivering a breakthrough drug for human clinical trials.”

Gurney says he expects the company will have a commercial partner before it reaches Phase 3 trials but is prepared to go further alone if needed. “Given the important medical need and the potentially transformative value of BPN14770 to patients, their families, and their caregivers, Tetra should be able to raise financing all the way through late-stage clinical trials and market approval.” Yet, he adds that, from an early stage, Tetra has received attention from licensing groups at larger companies, as well as access to regional and national venture capital funds.

Gurney points to another special hurdle common to CNS companies: to show, in early human clinical trials, that its drug reaches the brain and engages the target. “Cutting-edge CNS programs need to deliver both a drug and an imaging agent, typically a PET ligand, to demonstrate target engagement. This doubles the complexity of the discovery phase, as PET ligands have their own set of optimization criteria which are distinct from CNS drugs.” Fortunately, he says, the company is “making rapid progress” in identifying a PET ligand it can use in early human trials of its lead product.