The Uphill Battle Toward Innovation For Antibiotic Resistance

The discovery of antibiotics as a class of drugs, based on Alexander Fleming’s breakthrough in 1928, seemed like a miracle, with potential to rid people and animals of the scourge of bacterial infection. However, by 1947, just four years after the beginning of mass production of penicillin, the first penicillin-resistant strain of staphylococcus aureus had emerged.

Because there has only been one new class of antibiotics since 1980, there are key unmet medical needs and therefore, important opportunities for the pharmaceutical industry. But there are also some major challenges to overcome.

UNDERSTANDING THE GROWING CHALLENGE OF ANTIBIOTIC RESISTANCE
According to the U.S. CDC in 2013, antibiotic resistance is the cause of more than 2 million infections and 23,000 deaths each year in the U.S., with costs of $20 billion and productivity losses of $30 billion.

As a response to the increasing levels of drug resistance, the U.K. government has worked with economist Jim O’Neill and the Wellcome Trust to create the Review on Antimicrobial Resistance. Its role is to understand the problems and propose solutions, from both the economic and the social perspective. O’Neill has described the future economic and social costs of antimicrobial resistance as still growing and too great to ignore, with a potential 10 million deaths a year worldwide by 2050, a higher mortality rate than deaths from cancer and diabetes combined. This could mean an economic loss of over $100 trillion. Solving the problem of antimicrobial resistance will be a combination of meeting scientific, economic, and communications challenges, and the pharmaceutical industry will have a key role to play in all of these. While solving or preventing the problem will be a costly process, it is likely to be a fraction of the cost of dealing with the long-term problem of resistance.

THE IMPORTANCE OF PHARMA-ACADEMIC COLLABORATIONS
The pharmaceutical industry and academia play important roles in developing new antimicrobials and preventing the development of resistance in order to improve patient outcomes. The companies working in this space tend to be startups or small to medium enterprises. For example, in January 2015, researchers announced the discovery of teixobactin, the first new class of antibiotics to be discovered in almost 30 years. The antibiotics are in preclinical development with U.S.-based early-stage biotech NovoBiotic Pharmaceuticals. Another early-stage company, Blueberry Therapeutics, is working to develop both new antibiotics and antibiotic resistance breakers, which are small molecules and biologics that target the bacterial-resistance mechanisms and can restore the sensitivity of bacteria to standard antibiotics.

For much of the antibiotic research being conducted, the challenge is bridging the gap between the idea, which is generated by academia or early-stage startups, and approval/market launch. Collaborations between industry and academia can play a role in this process. For example, Redx Anti-Infectives, a subsidiary of U.K.-based startup Redx Pharma, is developing new anti-infectives against methicillin-resistant staphylococcus aureus (MRSA). This is as part of a £5.6 million (approximately $8.3 million) collaboration with the NHS Royal Liverpool and Broadgreen University Hospitals Trust. According to Redx Pharma, which is based at the Alderley Park BioHub along with Blueberry Therapeutics, the company’s collaboration is the first example of a type of deal in which the NHS funds development in return for a promise of commercial returns in the future.

Another example of this kind of collaboration is also a sign that Big Pharma is returning to the field. In May 2012, GlaxoSmithKline and AstraZeneca, along with academics and other pharma companies, set up an £180 million ($261 million) research collaboration. Part of the European Innovative Medicines Initiative (IMI), the aim of the agreement, dubbed New Drugs for Bad Bugs (ND4BB), is to combat antibiotic resistance in Europe by tackling the scientific, regulatory, and business challenges. In March 2015, the White House cited the program as a potential collaborator in its U.S. National Action Plan for Combating Antibiotic-Resistant Bacteria. Another example of Big Pharma moving back into antibiotics is the collaboration between AstraZeneca and Forest Laboratories to develop the combination antibiotic ceftazidime-avibactam, currently pending approval in Europe for in-hospital use. 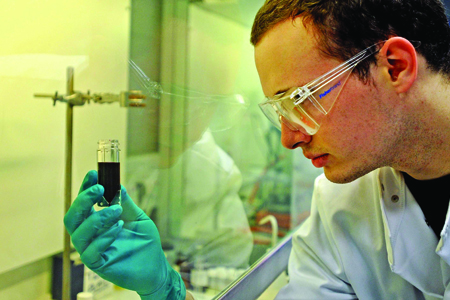 "Solving the problem of antimicrobial resistance will be a combination of meeting scientific, economic, and communications challenges, and the pharmaceutical industry will have a key role to play in all of these."

BATTLING ANTIBIOTIC RESISTANCE THROUGH DIAGNOSTICS
According to a Health Protection Agency survey in 2011, around a quarter of patients believed that antibiotics work on coughs or colds, and over half of patients expect to be prescribed antibiotics for a respiratory tract infection. In a brief and pressured consultation, it may be difficult for healthcare professionals to explain to patients, parents, or caregivers why they should not be given antibiotics, and perhaps as result of this, 97 percent of people in the survey said that a healthcare professional put them on antibiotics when requested.

Diagnostics and personalized medicine will be important in the battle to reduce the development of resistance, as this approach will support doctors or pharmacists when they turn down requests for antibiotic prescriptions for people with viral infections. This approach will also ensure that the right antibiotics are given to people who need them. To reach this goal, the diagnostics will need to be simple, lowcost, fast, and usable at the point-of-care. In the U.K., some Boots pharmacies are offering a Sore Throat Test & Treat Service. An initial consultation with a health advisor assesses whether the infection is likely to be bacterial or viral. For those that show signs of being bacterial, a pharmacist carries out a further examination and offers a throat swab test to detect Streptococcus A, and only offers antibiotics if this is positive.

Spectromics, using spectrometric technology from the University of Manchester, has developed a fast and accurate point-of-prescription test. This monitors reactions between the patient sample and a panel of antibiotics to diagnose whether a bacterial infection is present or not. It identifies antimicrobial susceptibility and resistance and then suggests the best form of treatment. The solution has been launched in India for the diagnosis of tuberculosis. Epistem, which also has its roots in the University of Manchester, has created a rapid and low-cost molecular diagnostics platform called Genedrive, which has been approved and launched in India for the diagnosis of tuberculosis. The key challenge for diagnostics, however, will be justifying the cost of a test when a course of antibiotics can cost less than a dollar.

EDUCATION IS A BIG PART OF PREVENTION
Preventing bacterial infections has potential to reduce the number of visits to doctors, therefore reducing the numbers of requests for antibiotics. The route to prevention can include education for patients, for example basic hygiene hints and tips to prevent spread of infection, explanations about the infections (both bacterial and viral) where antibiotics don’t help, and reminders about how to take antibiotics correctly, including finishing the treatment course. Doctors need to be supported by tools and information to help them when working with patients who are requesting (or even sometimes demanding) antibiotics. In a trial carried out in collaboration between England’s Chief Medical Officer, Public Health England, the U.K. Government’s Department of Health, and the Behavioural Insights Team, English general practitioners (GPs) were sent a letter that provided feedback on their antibiotic prescribing practices. In the study, the GPs with the highest antibiotic prescribing rates cut antibiotic prescriptions by 3.3 percent over 6 months. While this may not seem like a lot, it equated to 73,000 fewer prescriptions and direct savings of over £92,000 (around $131,000). According to the Behavioural Insights Team, it’s a simple intervention and should cost only around 6p (less than 9 cents) per prescription saved. In contrast, a patient-focused education campaign didn’t have a significant impact on prescribing rates. Education and support schemes like this should be supported by the pharmaceutical industry.

Vaccines have been highly successful in preventing viral infections and have a growing role in the prevention of bacterial infection and therefore potentially reducing the demand for antibiotics. GlaxoSmithKline acquired vaccine specialist GlycoVaxyn in early 2015, along with a small pipeline of early-stage vaccines against pneumonia, Pseudomonas, Staphylococcus aureus, and shigellosis.

Da Volterra is taking a different approach to prevention. Based in Paris, France, Da Volterra is a clinical-stage biotechnology company with a focus on the microbiome. Its lead product, DAV132, is designed to prevent the occurrence and recurrence of antibiotic-associated Clostridium difficile diarrhea. It is co-administered with antibiotics and captures residual antibiotics in the late ileum, caecum, and colon before they can disrupt the intestinal microbiota. 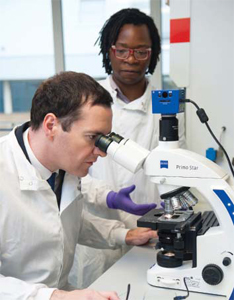 Drug development is a costly business, and drug companies need to be confident of a return on investment. The increasing (and necessary) push toward appropriate use of antibiotics and the low price of the existing marketed drugs means an uncertain payoff for pharmaceutical companies and investors. Therefore, it’s an unattractive investment profile, making it difficult to see an economic argument for developing a drug that should be prescribed only under very specific circumstances and for as short a period of time as possible — even less so for developing an antibiotic of last resort. This is true for small companies struggling to gain initial funding, companies developing innovative nontraditional approaches (e.g., bacteriophages, antibodies, or d)rugs designed to “break” resistance) and for larger companies that need to show a return on their investment for shareholders.

Changing this mindset requires a change in the economics and the development of a robust commercial model, based on both push and pull mechanisms:

One of the key approaches to enticing companies to invest in this area will be the development of better pricing models. This could include value-based pricing, which is more akin to the high prices charged for drugs for rare diseases. Value-based pricing would provide return on investment, as well as reduce demand through payers and people who pay or co-pay for their own medications. However, these prices would need to be subsidized for certain patient groups and for developing countries. Risk-sharing agreements between healthcare institutions and pharmaceutical companies could also help balance risk.

THE FUTURE OF ANTIMICROBIAL RESISTANCE
Preventing and combatting antimicrobial resistance is a challenge for the pharmaceutical industry, from startups to major global players. Finding a solution will be dependent on collaboration and a constellation of incentives, including funding, pricing models, and optimization of FDA and EMA regulatory pathways to bring drugs and other solutions through clinical trials and on to the market to the patients who need them.