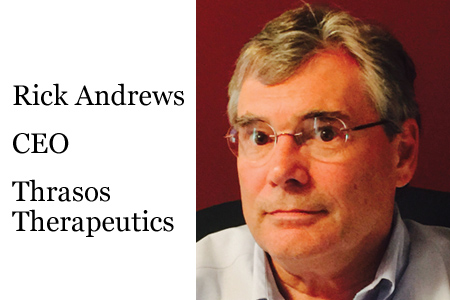 Thrasos is developing two peptide drugs: THR- 184, for prevention of acute kidney injury (AKI) in cardiac-surgery patients, and THR-575, for treatment of diabetic nephropathy, the leading cause of chronic kidney disease (CKD). Both drugs are intended to address apoptosis and inflammation and to slow the growth of scar tissue (fibrosis) in the twin organs by acting on the BMP/Smad (bone morphogenetic protein/ Smad protein) pathway. Phase 2 trials of both candidates and lead indications are under way.

WHAT’S AT STAKE
Some conditions are more common than we think. The big maimers and killers among diseases get all the attention. People constantly worry about cancer, heart problems, and infection, but they rarely think about their kidneys. Truth is, our kidneys often take damage we don’t even notice, but which can affect almost every vital function in our bodies. One of the most frequent causes of acute kidney injury (AKI) is something we normally see as treatment — surgery.

As happens in life, we overlook some morbidities because we can’t do anything about them. It’s only when someone comes up with a solution that we take notice. I believe that is what will occur with kidney injury. The lead drug at Thrasos may awaken our awareness of this delicate and precious organ. It is not that the symptoms of AKI are invisible, but that their connections to the kidneys typically go unnoticed unless the organ damage is already known. Blood pressure, red blood cell production, and bone health are just a few of the functions tied to the kidneys. Surgery and other traumas can disrupt the complex protein chemistry that goes on in the twin organs. “When a nurse asks a patient just out of surgery if they need to pee, they are asking because they want to know if your kidney function is normal,” says the company’s CEO, Richard Andrews.

Thrasos is following a line of development stemming from the discovery of a pathway, BMP/Smad which has many functions, some directly linked to protection of the kidneys. “This pathway has the ability to protect the kidney from injury in ischemic and inflammatory environments, and it also has the ability to help temper the TGF (transforming growth factor) beta-induced fibro-genesis, the fibrotic process that causes destruction in long-term progression of injury to the kidney,” Andrews says. The challenge was separating the kidney-related subpaths from the bone-growth tracks in the pathway. Thrasos identified some peptides that activate the specific proteins in the pathway that protect the kidneys but do not induce bone formation.

A competing, or possibly complementary, drug for AKI is under development at the Dutch company, AM Pharma, treating the condition primarily as an inflammatory state. This is a good sign for the company. Any so-called competition in a dormant space tends to increase awareness and market potential of that space.

Heart surgery is the most common surgical cause of AKI — thus, the clinical program for the lead Thrasos candidate is pursuing an indication for cardiac-surgery patients. AKI can also be triggered by many nonsurgical factors, from the seemingly benign, such as contrast- imaging agents, to mortal threats such as sepsis. But the result is the same: damage to kidney cells that prevent the organ from functioning normally. The therapeutic concept, protecting kidney cells, also may apply to CKD, which is the ultimate target of the second peptide-drug Thrasos is developing: diabetic nephropathy, the main cause of CKD. The current large Phase 2 trial in AKI, employing an adaptive design, should test the concept thoroughly.

July 2015: Announced completion of 452-patient enrollment in Phase 2 clinical study of THR-184 for prevention of AKI in “at risk” patients undergoing cardiac surgery. Data is expected in January 2016.

September 2014: Announced completion of interim analysis of Phase 2 trial of THR-184: study will continue with high dose after data review.