Restorative Sleep and a Second Pathway to Pain Control 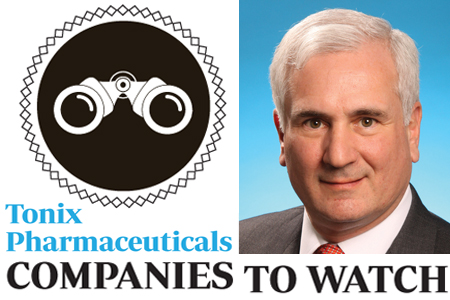 Tonix Pharmaceuticals has two development programs underway for one drug, TNX-102 SL (cyclobenzaprine), the first in Phase 3 for fibromyalgia; the second, Phase 2 for post-traumatic stress disorder (PTSD). Both programs aim to use an increase in “restorative sleep” as “a means to broadly improve the patient’s symptoms,” including pain. A third development program, with TNX-201 (dexisometheptene mucate) for episodic tension-type headache is due to launch a Phase 2 trial in June 2015.

WHAT’S AT STAKE
The pain comes from everywhere — and nowhere. It’s in the air or even in empty space. It forbids all rest, all slumber.

That is the common denominator of fibromyalgia and post-traumatic stress disorder (PTSD), conditions targeted by the two Tonix development programs for TNX-102 SL. The key to treating both conditions is not to deaden the pain but to get at one of its chief sources — lack of sleep. The drug has two mechanisms — antagonism of both the serotonin type 2A and alpha-1 adrenergic receptors — for facilitating “restorative sleep” in patients. “By improving the sleep, we end up getting changes in the pain,” says Dr. Seth Lederman, CEO. “Our drug is about sleep quality, not quantity. It is not an analgesic; it works by potentially improving fibromyalgia at a more fundamental level.”

Results from the Phase 2b study in fibromyalgia were mixed but ultimately supportive of the company’s thesis. The fall in mean daily pain scores among treated patients versus placebo (the primary endpoint) did not reach statistical significance, but a third of them reported a drop in pain of at least 30 percent (secondary endpoint) — a “clinically meaningful response.” This is what mid-stage studies are for — sorting out the endpoints — and a well-designed trial will often reveal greater potential for the secondary. “We told the FDA that we believe the responder analysis is a better measure of the drug, and they agreed with our view,” Lederman says.

Often in fibromyalgia, he explains, a regional chronic pain becomes generalized pain due to changes within the central nervous system over time. Someone may start with localized lower back pain, but after years of receiving the pain signal, the sensory-processing biology changes until pain seems to come from everywhere at once. He says treatment with TNX-102 SL may work to reverse those changes and bring patients back to having the original localized pain, “a normalization of the way that the brain is interpreting pain.”

TNX-102 SL may have the advantage of greater tolerability, Lederman suggests, because it appears to lack the side effects of already marketed prescription pain and sleep medications. He also sees the drug as a positive alternative to the use of opiates in chronic-pain conditions such as osteoarthritis and post-surgical pain. “Unfortunately, patients with a significant fibromyalgia component are probably the ones who are resistant to opiates but also the ones whom doctors chase with higher and higher doses of opiates.”

PTSD shares many traits with fibromyalgia. Thus, the company may be able to leverage the safety data from the fibromyalgia trials in its development of the PTSD indication, especially considering its military context. The small company can use every advantage it can get in this reputedly risky area, from which much larger companies have retreated.

The third development program, with TNX-201 for episodic tension-type headache (ETTH), is interesting as well. All of the approved medicines for ETTH contain a barbiturate, butalbital. In TNX-201, Tonix believes it has an analgesic that targets a novel pain-reduction mechanism, via a specific brain receptor never before a focus of drug development. The original compound, isometheptene, approved in the 1930s, was taken off the market in its old “racemic” form (mixture of two isomers) due to a lack of modernization, but Tonix is developing TNX- 201 as a single isomer of the earlier compound according to current FDA standards.