As if the challenge of providing healthcare coverage is not difficult enough for small businesses, the Department of Treasury is now threatening to penalize any employer who provides tax-preferred resources for their employees to purchase insurance coverage in the individual market with a $36,500 annual fee per employee.

You read that right — the penalty for providing such assistance is $100 a day per employee — or more than 12 times the penalty for large employers failing to provide coverage as mandated by the Affordable Care Act (ACA)!

Small employers who are not even required to provide coverage are most likely to become ensnared in this punitive policy because they often do not have the sophistication, time, or resources to purchase group coverage for their employees. Rather, many fund tax-preferred Health Reimbursement Arrangements, which their employees use toward the purchase of coverage in the individual market or to simply pay for qualified health items and services, such as physician visits and prescription drugs. 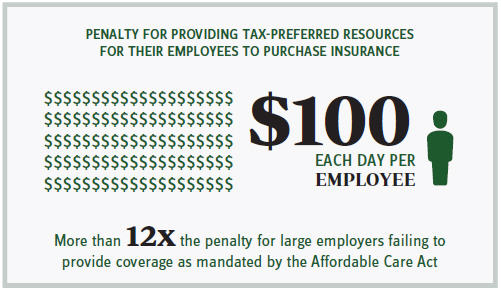 But the Department of Treasury issued a vexing regulation stating that such contributions violate the ACA’s market reforms, specifically the requirement that insurance policies must provide unlimited catastrophic protection and free preventive care.

The small business community met that regulation with bafflement and outrage. All were willing to stipulate that the discrete dollar contributions in themselves do not constitute an insurance policy. Those funds are resources to purchase an insurance policy in the individual market, which of course would be in compliance with the ACA requirements.

A backlash is now fomenting on Capitol Hill as constituents seek redress. At a recent Senate Finance Committee markup, Senator Grassley (R-IA) read an excerpt from a letter from a dentist in Sioux City:

“Help! I am a small business owner — seven employees. I have been helping to subsidize my employees' health insurance for 20 years. I just found out that the Market Reforms of the ACA have made that illegal … . Now all of my employees will have to pay taxes on the money I gave them for health insurance. They all live paycheck to paycheck and won't be able to come up with the taxes on this money. They also most likely won't qualify for the exchanges and any government subsidy. They are caught in the middle. I can't subsidize their health insurance because I risk a $100/ day/employee penalty. Please hurry and do something to help the millions of middle-class, small-business employees who are caught between a rock and a hard place.”

A homebuilder with 10 employees in Laplace, LA, received a similar notice from the IRS that the coverage he had been providing for his employees would result in a $100 a day penalty per employee. He was forced to drop the coverage and his employees are now paying more than $10,000 a year each to purchase health insurance, and his effort to raise their salaries to compensate for some of the difference increased his business’s cost by $5,000 per employee.

What is going on here? Why penalize small employers with fines exceeding $36,000 per employee for providing coverage through the individual market?

Rather than speculate, Rep. Charles Boustany (R-LA), a senior member on the Ways & Means Committee who has introduced legislation to reverse the Treasury regulation, queried Treasury Secretary Jack Lew at a recent hearing, “Why would Treasury introduce this sort of draconian penalty?”

Lew’s response: “Via the ACA, we have moved to a system that benefits individuals with affordable healthcare, and we are focused on that goal.” How’s that for a non-sequitur platitude?

Rumors are now swirling that implementation of the regulation may be briefly delayed but not withdrawn. 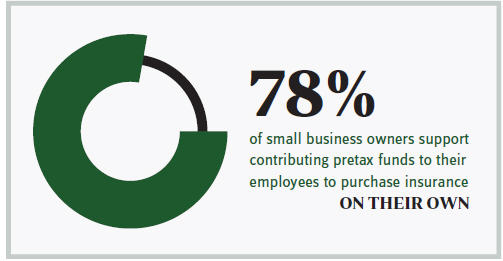 Rep. Boustany’s bipartisan legislation that was introduced along with Rep. Mike Thompson (D-CA) has earned the plaudits of the National Federation of Independent Business (NFIB), the National Association for the Self-Employed, the National Association of Homebuilders, and the National Association of Manufacturers and remains the best hope to reverse this ill-thought policy. NFIB underscored the importance of the bill in its endorsement letter, noting, “Fourteen percent of nonoffering businesses utilize a reimbursement arrangement. In a recent NFIB ballot, 78 percent of small business owners support allowing employers to contribute pretax funds to their employees in order to purchase insurance on their own.”

Obamacare’s employer mandate applies to large businesses with 50 or more workers. In February, the administration announced that it would once again delay the implementation of the mandate for employers with 50 to 99 employees until 2016 – two years longer than called for under the statute. And companies with more than 100 workers received a grace period if they offered coverage to 70 percent of their employees rather than 95 percent in 2015, as called for in the statute.

It is unfortunate that the administration does not have similar sympathy for small businesses that are not even subject to the mandate. They are vulnerable to massive fines that could put them out of business for providing healthcare assistance to their employees in a way that violates the administration’s view of how healthcare should be provided.

A little paternalistic and pernicious, don’t you think?