Why Now Is The Time For Pharma To Expand Into Africa

Africa’s status as one of the fastest-growing economic regions in the world has transformed the continent from a focus of corporate social responsibility to a potential major profit center for the global pharmaceutical industry. In a world of slowing and stagnating markets, Africa represents the last geographic frontier where genuinely high growth is still achievable, said Tania Holt, principal in McKinsey and Company’s Johannesburg, South Africa, office. 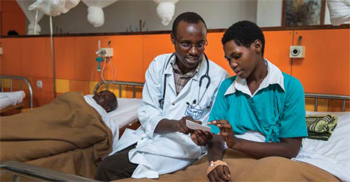 As a result, industry leaders such as GSK, Novartis, Sanofi, and AstraZeneca have been expanding their commercial footprints into Kenya, Nigeria, and other sub-Saharan African countries outside of South Africa. Today almost every major multinational pharmaceutical company is represented in one or more of Africa’s 54 nations, said Holt, co-author of the 2015 McKinsey report, Africa: A Continent of Opportunity for Pharma and Patients.

GSK is one of the Big Pharma companies in Africa for the long haul. In 2014, the company announced that over the next five years it would spend $216 million to expand the continent’s healthcare training, science education, and R&D infrastructure. GSK also announced that the cost of its patented drugs in Africa would not exceed 25 percent of the price charged for the medications in the U.S. GSK announced in March 2016 that it no longer would seek patent protection for its drugs in UN-designated least-developed countries, many of which are located in Africa. This new policy will allow generic companies to manufacture generic versions of GSK’s patented drugs in those countries.

These initiatives are a long-term strategic investment to drive the company’s business growth on the continent, said Allan Pamba, M.D., GSK’s VP of pharmaceuticals for East Africa and VP for government affairs for Africa. “GSK is willing to make a small return now because we have a long-term view of the market potential of Africa,” said Pamba, who was born and educated in Kenya.

Undergirding the pharmaceutical industry’s long-term view of Africa as a potential economic engine of growth are the following data points from the McKinsey report:

In recent months, concerns about Africa’s growth have emerged as a result of the recent plunge in oil prices in the continent’s oil-producing countries and the economic downturn in China, a major business investor on the continent. “The fundamentals are still very strong,” Pamba said. “As an emerging market, Africa is 15 to 20 years behind India’s economic cycle. Now is the opportunity to grow and invest in Africa.”

“Demographics continue to paint a positive picture long-term,” said Holt. “Africa’s population is young and growing at a rate faster than any other continent.” About 60 percent of Africa’s current population is below the age of 35.

"As an emerging market, Africa is 15 to 20 years behind India’s economic cycle. Now is the opportunity to grow and invest in Africa."

“AFRICA RISING”
The continent’s rapidly expanding young population is one of several factors responsible for Africa’s improved economic development, often referred to as “Africa Rising.” Another factor is the continent’s rapidly expanding middle class. By 2025, the annual income of 70 percent of African households will be higher than $5,000, which in the developing world is the entry point for an emerging middle-class lifestyle with sufficient discretionary income to spend on health, according to the McKinsey report.

Africa’s growing middle class also has more discretionary income to spend on high-calorie, high-fat food and cigarettes. As a result, an epidemic of hypertension, diabetes, and other noncommunicable diseases (NCDs) is “brewing in Africa even as we begin to turn the corner on communicable diseases such as HIV/AIDS and malaria,” Pamba said. According to the World Bank, NCDs were responsible for 28 percent of deaths in sub-Saharan Africa in 2008. By 2030, deaths from NCDs are expected to increase to 46 percent.

“There is a narrowing window of opportunity to stave off or mitigate the NCDs epidemic by strong investments in prevention,” said Pamba. “Failing that, the increase of NCDs in the African population puts Africa in the same market opportunity as developed countries — and relevant for the many multinational pharmaceutical companies whose portfolios include drugs for heart disease, high blood pressure, diabetes, and cancer.”

Also contributing to Africa’s rise is the urbanization of the continent. Today an estimated 37 percent of the African population lives in 30 key cities. By 2030, about 50 percent of Africa’s population will be city dwellers, according to the McKinsey report. “By focusing its efforts on the pockets of growth in each target country, a company can obtain high commercial impact,” Holt said. However, because the barriers to access often differ in cities and rural areas, companies must develop fundamentally different business models for each population.

Most pharmaceutical companies are focusing their commercial efforts on the 10 African countries responsible for more than two-thirds of the continent’s GDP and cumulative growth over the past decade. “Companies have become very granular in their strategies,” said Holt. “Before they make an investment, they want to know whether they’re in the right country, have the right drug portfolio for the country’s healthcare problems, have the right supply hub, and are interacting with local governments at the appropriate level.”

REIMBURSEMENT IS TOP BUSINESS CHALLENGE
Kenya is one of the 10 African countries that pharma is focusing on. It is considered by many a gateway to East Africa because the country’s logistically well-connected capital, Nairobi, provides access to surrounding East African countries. In West Africa, the anchor points typically are Lagos in Nigeria as well as either Dakar in Senegal or Abidjan in the Ivory Coast. Nigeria, the West African nation in which most companies have set up operations, is the most populous country and has the largest economy on the continent. “Because of demographic and economic factors, Nigeria is often referred to as the ‘next South Africa,’ from a healthcare potential perspective,” Holt said. GSK’s robust commercial operation in Nigeria includes a large manufacturing plant. Kenya and South Africa are the sites of GSK’s other manufacturing facilities on the continent.

In Kenya, Nigeria, and the Ivory Coast, reimbursement is one of the top business challenges for drug companies. Health insurance is available to only 20 percent of the South African population and just 3 to 6 percent of people living outside South Africa. Therefore, because most Africans must pay out-of-pocket for their medications, pharmaceutical companies must take a different approach to pricing and reimbursement on the continent than they do in developed countries.

Since 2014, GSK’s approach to pricing and reimbursements has been capping the price of its patented medicines. Even though GSK’s drugs and vaccines are sold at a steep discount in Africa, the British company’s commercial operations are profitable, said Pamba. “In addition, we are increasingly launching our new drugs in Africa in the same year when we launch in the U.S and Europe, keeping Africa in step with the leading global economies,” he said.

GSK evaluates Pamba’s performance in part by the quantity of the British drug company’s products that he and his team distribute in East Africa. “We have adopted a high-volume, low-margin business model, because our goal is to reach as many people as possible,” said Pamba, whose GSK offices are based in Kenya.

In addition to pricing, the lack of healthcare workers is a major challenge for pharmaceutical companies in Africa. “This means that the number of patients who come in contact with the healthcare system and obtain a correct diagnosis and treatment is very limited relative to what it could be,” Holt said.

Several drug companies have launched training programs to boost the number of healthcare workers in Africa. In 2014, GSK announced its Least Developed Countries initiative, in which 20 percent of the company’s profits from the African market is used to fund the training of additional healthcare personnel on the continent. Pamba said that GSK regards the program as a longterm strategic investment to drive the company’s business growth in Africa. Thus far, 30,000 healthcare professionals in low- and middle-income countries in sub-Saharan Africa have completed GSK-sponsored training, which is conducted by two NGOs, Save the Children and the African Medical and Research Foundation, as part of the UN’s One Million Community Health Workers campaign.

Inadequate public awareness of NCDs is another challenge for pharmaceutical companies in Africa. To obtain an accurate diagnosis and the best treatment, patients must know that they need to seek healthcare. “People must be aware that diabetes and high blood pressure exist, and that there are effective treatments for these disorders,” she said.

ONE SIZE DOES NOT FIT ALL
The McKinsey report recommends that drug companies collaborate with health ministries and NGOs to develop and conduct public awareness campaigns, health screenings, and treatment in core therapeutic areas. According to the report, “Such relationships give companies opportunities to work on important issues such as counterfeiting and intellectual property rights, while also allowing them to develop expertise in markets and health systems and play an active part in improving public health in Africa.”

Another challenge for pharmaceutical companies is the distinct nature of each of the continent’s 54 countries. Africa is not one market, but many markets, each with its own legislative code, macroeconomic landscape, and political complexities. In addition, the regulatory environments vary from country to country in Africa. “A one-size-fits-all approach does not work in Africa,” said Holt. “The pharmaceutical companies that appear to be the most successful have the ability to get a real grasp of the local understanding and granularity.”

However, talent is still scarce in Africa. By 2020, just 8 percent of Africa’s population is expected to earn tertiary degrees. Drug companies must compete for talent staff not only with each other but also with oil and gas, banking, and telecommunications companies. “So like any other industry in Africa, the pharmaceutical industry must play an active role in developing the next generation of leaders,” said Holt. The McKinsey report recommends that companies consider building capabilities in-house and growing their own leaders. (McKinsey takes this approach in Kenya where the company trains promising young Kenyan professionals in critical thinking and quantitative analysis, as well as people skills such as cooperation and consensus-building.) 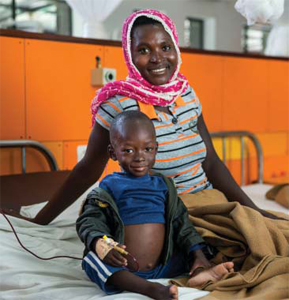 To help nurture Africa’s scientific talent, GSK is establishing academic programs in the pharmaceutical sciences, public health, engineering, and logistics at several of the continent’s major universities. GSK also has established an Open Lab for research and training on the prevention, diagnosis, and treatment of NCDs. The Open Lab is currently based at the company’s R&D facilities in Stevenage, U.K. “A particular focus of the Open Lab is to support local African physicians in their studies to answer burning research questions such as why is there a high incidence of treatment-resistant hypertension in African populations, and why does breast cancer occur earlier in African women compared to their Western counterparts,” said Pamba.

If the Open Lab existed when he was a young physician, perhaps Pamba would have applied and received a research grant to study HIV/AIDS, malaria, and the other infectious diseases that afflicted his patients in Kenya. When he was growing up, Pamba, like many children in Kenya, suffered from malaria. He was one of the lucky ones — he survived. When he was a medical student in Kenya, Pamba said that he never expected that the economy of his home country — and the continent — would become one of the fastest growing in the world. “Today when I travel the continent, I see a lot of happy faces, I see young Africans who are successful entrepreneurs, I see progressive governments, and I see hope,” he said. “It is the dawn of a new era. My generation must carry forward responsibly, leaving no one behind.”