Amnesty Highlights The Inequities Of Obamacare

Just days after a thorough drubbing in the midterm elections when Republicans wrested control of the Senate from the Democrats, winning almost every contested race and stacking up the largest majority in the House since Prohibition, President Obama announced an executive order that will prevent deportation of 5 million illegal immigrants. Providing amnesty was the president’s takeaway from the election?

This unilateral action says more about his intention to work with Congress for the last two years of his presidency than any statement he could make.

But the executive order also highlights the inequities that riddle the implementation of Obamacare. Illegal immigrants in California may soon gain Medicaid coverage that will be financed more than 90 percent by the federal government, while 7 million American citizens who live below the poverty level in 23 states that have not undertaken a Medicaid expansion have no access to coverage. Nancy McFadden, Governor Jerry Brown’s (D-CA) top policy aide, recently stated, “We’re evaluating, but the president’s recent action on undocumented immigrants could perhaps open a door for more coverage of more people under Medi-Cal.” California is home to more than one–quarter of illegal immigrants in the U.S.

But much of the South and mountain states have refused to expand Medicaid (see attached map), and Obamacare’s legislative language expressly prohibits individuals below the poverty level from obtaining subsidized coverage in the insurance. This decision was made to contain the cost of the program as Medicaid coverage is cheaper than private coverage because it pays providers substantially less. Republicans suggested making private coverage available to all regardless of income, but Senator Mike Enzi’s (R-WY) amendment effectuating that change was defeated by Democrats on a party-line vote in the Finance Committee. As a result, in states that have not undertaken a Medicaid expansion, a family of four with income up to $95,400 (that is, four times the poverty rate) can obtain subsidized coverage, but a family below the poverty line cannot. Huh?

In Texas, more than a quarter of the population lacks health insurance, and the poorest of those cannot sign up for subsidized coverage in the health exchange because that coverage is explicitly limited to individuals above poverty. The architects of Obamacare assumed these individuals would get coverage under Medicaid, yet the Supreme Court made that expansion optional for states. But where is the corrective legislation from the administration? President Obama has put nothing forward to address this glaring deficiency with his law, such as repealing the prohibition of subsidized coverage in the exchange for those under the poverty level. He would rather pontificate about state inaction.

These inequities may become even more starkly defined when the Supreme Court rules on Pruitt v. Burwell later in June. That case will determine whether Americans living in 36 states who are enrolled in the federal exchange (through the infamously inoperable Healthcare. gov website portal) can continue to receive subsidies for their coverage. If the Supreme Court upholds a logical reading of the statute that subsidies can only flow to an “exchange established by a state,” Americans residing in states utilizing the federal exchange cannot receive subsidies, but those enrolled in a state exchange will continue to receive the subsidy.

As a result, a citizen residing in Maryland would retain a full subsidy but a citizen with the identical income living just across the Potomac River in Virginia would not get any subsidy. That is how the law was deliberately drafted, as professor Jonathan Gruber, the key architect of Obamacare, admitted in a now famous leaked video.

Just as baffling, Obamacare’s expansion of Medicaid to an additional 9 million poor Americans is facing a new threat: Obamacare itself. Responding to the most fundamental problem with Medicaid — lack of access to physicians willing to accept Medicaid’s paltry payments — a recent Department of Health and Human Services Office of Inspector General study found that half of physicians listed as serving Medicaid enrollees could not offer appointments to patients. Democrats inserted a provision increasing Medicaid reimbursements to primary care physicians to the Medicare level. This policy resulted in a 73 percent increase in payments, on average, to primary care physicians, according to the Kaiser Family Foundation. Just one problem — the provision lasted for just two years and expired at the end of 2014. Why? It was a budget gimmick to mask the true cost of the program.

Primary care physicians are now just finding out that the enhanced payment was temporary, so many may stop taking Medicaid beneficiaries. This would render the coverage expansion essentially meaningless — if you cannot see a physician willing to treat you, the coverage is in name only. What is the administration’s answer to this self-created crisis? Last year’s budget suggested a one-year extension of the policy, leaving the identical cliff in the following year. More gimmicks.

Certainly, a Republican Congress could take up the cause and put its own imprint on a policy to address the Medicaid payment-and-access issue by delineating clear metrics on whether a payment enhancement extension is solving the access problem, and perhaps targeting it at the most vulnerable populations to contain costs. But presidential leadership is needed on a program that bears the president’s name. Fortunately, 15 states have announced plans to extend the payment enhancement on their own, but failing congressional action, that would establish even more inequities across the country.

Obamacare implementation also has yielded bizarre inequities across populations in terms of covered benefits. Infertility afflicts one out of eight couples and can be caused by medical conditions such as cancer, physical trauma, polcystic ovary syndrome, and endometriosis. Yet infertility treatments were not included in Obamacare’s “essential benefits,” and the 15 states that presently mandate that benefit will have to pay its full premium cost in 2016 or repeal the mandate. 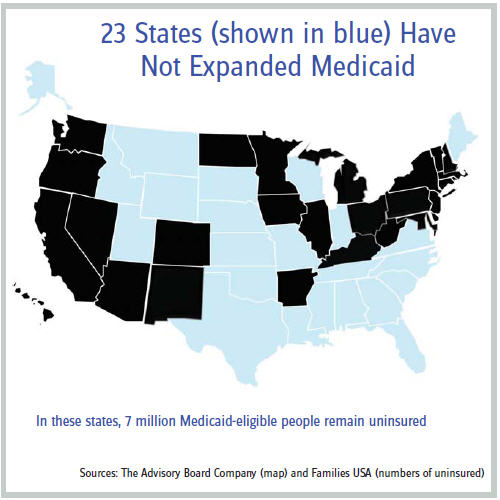 Meanwhile, Medicare recently determined sex-change operations to be “reasonable and necessary” for Medicare’s seniors (average age 76) and will be covered. Federal taxpayers will finance a sex-change for an individual who has lived 80 years as Jane to become Joe, but cannot assist a young couple who cannot conceive because the hopeful mother cannot get pregnant due to chemotherapy or radiation for her cancer. In whose reality does this inequity make sense?

A first step to addressing the emerging inequities in Obamacare is for President Obama himself to recognize and own the current implementation challenges of the law. This means suggesting solutions for the poorest individuals who cannot obtain coverage or see a doctor even if they obtain Medicaid coverage. It also means productively engaging in a real dialogue with Republicans, who will, for the first time in his presidency, control both houses of Congress. Issuing further executive orders and taunting his opposition is no longer a sustainable strategy.