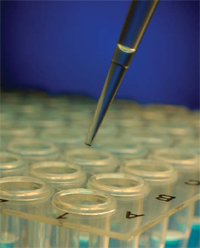 Biologics are among the most promising therapeutics for conditions that lack satisfactory treatments using conventional medicines. As a result of more specific targeting, biologics offer fewer side effects and, often, more potent payloads than would be feasible with traditional therapies. Biologics are also enabling the transition to personalized medicine.

“Biologics offer great opportunities for growth by addressing unmet needs so therapeutics are more efficacious and more convenient for patients,” emphasizes Bobby Sandage, Jr., Ph.D., president, CEO, and director of Coronado Biosciences. “Their success depends upon identifying the best pathway and ensuring there is a clear, unmet need for an improved form of a drug that otherwise may require injection,” he says.

For the cancer-fighting antibody drug conjugate T-DM1 (trastuzumab emtansine), the need was clear. In November 2012, the FDA accepted Coronado’s Biologics License Application (BLA) and granted it priority review status. T-DM1 is one of many biologics in development. Since 2009, there have been more than 150 biologics development deals signed each year, according to Thomson Reuters. Sandage explains that there are few disease areas in which biologics aren’t being developed. However, oncology, autoimmune diseases, infections, inflammatory diseases, and traditional vaccines are likely to experience the highest growth. “There is always a need in diseases like Crohn’s, ulcerative colitis, Type I diabetes. So, if a biologic shows efficacy, it will find a market,” he adds. “TNF-alpha is a good example. It treats autoimmune diseases and has experienced doubledigit growth for more than a year. If it continues to show efficacy as new indications are added, its use in treating autoimmune diseases will grow dramatically.” To underscore his point, Sandage points to the TNF (tumor necrosis factor) inhibitors Embrel, Humira, and Remicade, which had combined sales for $26 billion last year. “They represent a tremendous advance for patients.”

At Coronado Biosciences, Inc., the focus is upon developing therapeutics to treat autoimmune diseases. Crohn’s disease, for example, has no known cure, and treatments are limited to managing symptoms, prolonging remission, and preventing relapse. Coronado’s lead therapeutic compound is based upon the hygiene hypothesis, in which an inverse relationship exists between the prevalence of autoimmune diseases and the extent of colonization of the parasitic pathogen helminthes. Therefore, Coronado Bioscienses uses Trichuris suis ova to modulate the immune system for patients with Crohn’s disease, ulcerative colitis, multiple sclerosis (MS), psoriasis, psoriatic arthritis, and type-1 diabetes. It has three programs currently in Phase 2 trials for Crohn’s disease, ulcerative colitis, and MS using that strategy. It also has one Phase 1 trial underway using tumor-activated natural killer (NK) cells against acute myeloid leukemia.

Personalized Medicine: The Next Generation Of Biologics

Industrywide, biologic drug development is segmented into three broad categories: monoclonal antibodies (MAb), therapeutic proteins, and vaccines, using multiple potential targets and approaches. “The nice thing is that you can find a small molecule that sits on a receptor or, alternatively, you can make an MAb that fits a pathway,” Sandage says.

He predicts the next generation of biologics will be geared to personalized medicine, as the understanding of the genome and of the disease pathway helps researchers to identify more targets. Autologous therapies are a good example. His company’s NK program extracts a patient’s own cells, increases their activity, and returns them to the patient. “That’s not how traditional pharmaceuticals are developed,” he explains.

In addition to expanding targets and indications, researchers also are searching for more patient-friendly delivery strategies. The vast majority of biologics, as large molecules, must be injected. Academic researchers, therefore, are partnering with biopharmaceutical companies to exploit novel pathways and develop methods to deliver proteins and other biologic materials intranasally, topically, or orally.

The Challenge Of Consistency With Biologics
Because biologics are made using living organisms that react to variability in their environment, some degree of batch-to-batch variability is inevitable. Demonstrating consistency, therefore, has been one of the greatest challenges faced by biologics undergoing regulatory agency evaluation. For biologicals, consistency often entails agreeing upon a range for each parameter that, though variable, still delivers a safe, efficacious product and the desired clinical outcome. “When a new biologic is developed that doesn’t fit a known criterion, the developer must work especially closely with regulators to develop relevant criteria related to safety, controls, and endpoints,” Sandage says. That’s true for biosimilars, too. The FDA’s draft guidances issued February 2012 provided a pathway to ensure interchangeability between biosimilars and already-approved biologic products.“The follow-on biologics market won’t be like the generic pharmaceutical market,” Sandage says. “When a drug like Lipitor goes off patent, 25 to 30 companies can make it easily. But only a few of the generic companies will be capable of making biosimilars.”

Partnering Is The Trend For Biologics
Because the barriers to entry are high, biosimilars companies are partnering with innovator companies in ways that allow the innovator to continue to recoup some profits from its work. Recently, biosimilars firms AET BioTech and BioXpress Therapeutics formed an alliance to develop a biosimilars version of adalimumab (Humira). In India, Dr. Reddy’s is working with Merck KGaA to codevelop biosimilar oncologics for the U.S. market. In Korea, Samsung and partner Biogen Idec plan to commercialize several biosimilars in 2015 at half the current price of the original medications. Typically, biosimilars are expected to be priced at 60% to 80% of the purchase price of branded drugs. In contrast, traditional generics typically are priced at 10% to 20% of the price of the branded drug.

With such a plethora of options, the global biologics market ranges between Thomson Reuters’ estimate of $90 billion and the IMS Institute for Healthcare Informatics’ figure of $176 billion. Despite their different estimates, both agree the growth rate for biologics surpasses that of traditional pharmaceuticals. Another analyst, the Freedonia Group, projects the annual growth rate for biologics at 6.5% until 2015, versus about 5% for the pharma industry as a whole. “There’s almost unlimited growth potential,” Sandage underscores.