When a traditional, randomized, controlled clinical trial fails, it’s not unusual for the study manager to comment, “If I knew before the trial began what I know now, the trial would have been planned differently.” To avoid this post-trial scenario, many biopharmaceutical companies are adopting adaptive clinical-trial designs, which allow the number of dosages and other trial-design elements to be modified at predetermined time points and under specific conditions outlined in the trial protocol. 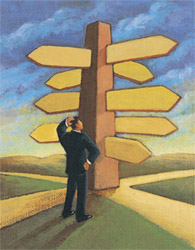 The adaptive trial design allows managers who are planning a new trial to predict what they likely will regret at the end of the study. “If you’re anticipating that you’ll regret that the trial didn’t test a larger dosage, the trial can be designed to also evaluate that dosage should the results dictate it,” said Scott Berry, Ph.D., a senior statistical scientist and president of Berry Consultants. Unlike a traditional trial, an adaptive clinical trial “sequentially updates what is known about the drug or device under study,” he added.

Adaptive clinical design also addresses the uncertainties that often exist before a study begins regarding the ideal sample size, dosages, treatment durations, and analytic method to use for evaluating the end point. Even the choice of end point is sometimes not clear.

In a traditional randomized clinical trial, the study’s leaders deal with these uncertainties by using the best information available before the study begins. Despite the uncertainties, the sample size and the other design elements must be locked in before patient recruitment begins and are immutable for the entire length of the trial. “An adaptive design allows you to take advantage of the new information generated during a trial about, for example, the best therapeutic doses so that the randomization process can be modified to hone in on these treatment arms by assigning more patients to them,” said Dr. Berry.

An adaptive clinical trial can be blinded or unblinded, according to the FDA’s draft guidance for industry, “Adaptive Design Clinical Trials for Drugs and Biologics,” published in 2010. However, the draft guidance states, “the risk of bias is greatly reduced or entirely absent when adaptations rely only on blinded analyses and the blinding is strictly maintained.”

Bayesian refers to the probability and statistical methods based on the concepts of Thomas Bayes. Classical statistical approaches also can be used to design an adaptive clinical trial. However, the Bayesian approach often is more appropriate for complicated clinical trials that ask many questions, said Dr. Berry.

Over 40 Bayesian adaptive clinical trials are listed as ongoing, terminated, or completed on www.clinicaltrials.gov. Among the ongoing trials is Eisai Inc.’s Phase 2 study of the investigational compound BAN2401 for the treatment of early Alzheimer’s disease. BAN2401 is an mAb antibody directed at the protofibrils that are believed to be the toxic form of amyloid leading to the pathological changes in the brain that characterize Alzheimer’s disease. Eisai selected the Bayesian adaptive design for the Phase 2 study because “it mitigated our uncertainties about the dosage, treatment duration, and end point that should be used in the trial to determine whether the drug has a clinical benefit and is disease-modifying,” said Andrew Satlin, M.D., executive VP of the neuroscience general-medicine product- creation unit at the biopharmaceutical company.

Persuading Eisai’s leadership was not that difficult, he said, because “everyone recognized that we needed to do the trial differently” because of the high-profile failures of three previous conventional Phase 3 studies of experimental Alzheimer’s drugs. Those trials were not sponsored by Eisai but other major biopharmaceutical companies.

A traditional Phase 2 study of BAN2401 would have been very large and costly, Dr. Satlin added, and would not provide Eisai with the opportunity to learn the most effective — and least effective — dosages and other design elements that should be incorporated in the design for a future large Phase 3 study. “The Bayesian adaptive trial design will teach us what to do in Phase 3,” said Dr. Satlin. Because the current Phase 2 study is blinded, Dr. Satlin and his team members at Eisai and the investigators at the trial sites are unaware of the trial data, including any modifications to the trial design that result from the interim analyses of the data.

Only The Computer “Knows”
In the Eisai study, only the computer system running the trial has access to the unblinded patient data, and it uses sophisticated computation algorithms to direct the analysis of the data and modify the trial if specific contingencies occur, Dr. Satlin said. The algorithms are based on the extensive pretrial simulations and scenario planning by Dr. Satlin and his staff. “We thought through the possible outcomes that could occur if we evaluated five dosages,” he said.

“Another possible outcome is that none of the dosages will work,” he said. If futility is determined, the trial’s computer system is programmed to alert Dr. Satlin’s team so that the trial can be terminated.

The trial’s computer system also informs Dr. Satlin and his staff if an interim analysis indicates an obvious clinical benefit of the drug. If this occurs before the completion of the trial (cutoff point for the estimated meaningful difference in change from baseline on primary end point for BAN2401 compared to placebo is 25 percent), Eisai will be able to trim development time and cost by initiating a Phase 3 trial while the Phase 2 trial is ongoing, he said. If a Phase 3 trial occurs, its design will be conventional, he said.

“Once we learn from the Phase 2 study everything we need to do to design a Phase 3 trial so it will be successful, there is no longer the need for a Bayesian adaptive design, and we avoid the complexities and added work associated with a Bayesian adaptive design,” said Dr. Satlin. “Also, regulators are more comfortable with a traditional design for Phase 3 because there is no possibility that trial modifications have been done, and therefore the results are easier to interpret.”

The BAN2401 study is the first, but will not be the only, Bayesian adaptive trial sponsored by Eisai. A new insomnia drug and another Alzheimer’s disease drug soon will be evaluated in Bayesian design trials.