After The Failed Trans-Pacific Partnership: What Comes Next? 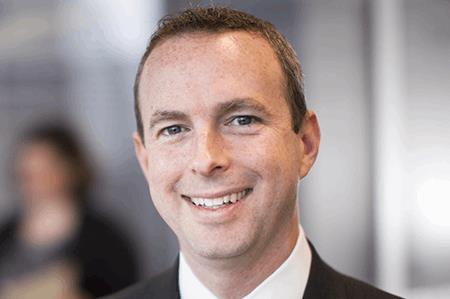 The Obama Administration, seeking to expand international trade, negotiated the Trans-Pacific Partnership (TPP) with 11 other Pacific Rim countries. After President Trump assumed office in January, he immediately withdrew the U.S. from the multilateral agreement. The other TPP countries — now known as the TPP 11 — and other Asian countries have since been seeking a replacement low-tariff trade market.

There are two approaches currently being pursued: a version of the TPP without the U.S. and the Regional Comprehensive Economic Partnership (RCEP) being driven by China and India. Under the former approach, the member states may maintain the intellectual property and other protections that the U.S. had demanded for the TPP; in the latter, many of them are likely to disappear.

PUSHING FOR PHARMA IP PROTECTIONS
The TPP was negotiated by 12 countries along the rim of the Pacific Ocean: Canada, the United States, Mexico, Peru, and Chile in the Americas; Japan, Malaysia, Singapore, Vietnam and Brunei in Asia; and Australia and New Zealand in Oceania. American negotiators pushed for the inclusion of, among other things, strong intellectual property protections that benefit pharmaceutical and life sciences innovators. Many of those provisions sought to bring other member states’ laws more closely in line with U.S. law: The treaty parties would have been obligated to amend their intellectual property laws to conform to their treaty obligations under the TPP.

Among its key terms, the TPP agreement addressed patents, trademarks, copyrights, and trade secret protections. TPP member states were required to meet the minimum standards set forth in the agreement, but were permitted to provide greater intellectual property protections (as long as they did not discriminate between the rights of domestic parties and the rights of citizens of other member states).

With regard to patents, members were to agree to grant patents to any invention that is “new, involves an inventive step, and is capable of industrial application.” That would include new uses for known products, new methods of making known products, and new methods for using known products. TPP also sought to get rid of a requirement for “absolute novelty”: Public disclosures by the applicant itself less than 12 months before the filing of a patent application would not constitute invalidating prior art. After filing, there would have to be patent term adjustment for any unreasonable delay in issuance of a patent (more than five years after filing or three years after request for examination), patent term extension for unreasonable delay in marketing approval, and substantial data exclusivity for agricultural chemicals, pharmaceutical products, and biologics. The exclusivity would be at least 10 years for agricultural chemicals, at least five years for a new chemical pharmaceutical entity, at least three years for a new indication for an existing pharmaceutical, and at least eight years for a biologic.

For trade secrets, among other things, the TPP would have required member states to adopt a law that would criminalize misappropriation.

With regard to copyrights, members would be required to establish a term that would extend at least 70 years after the death of the author or 70 years after publication, depending on the regime selected by the member state. However, the agreement would establish a safe harbor from copyright infringement liability for internet service providers under certain conditions. All in all, TPP would require member states to have intellectual property protections built on a framework very similar to the regime that already exists in the U.S. 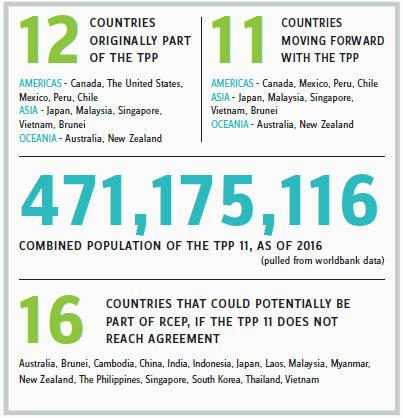 SHORTER DATA-EXCLUSIVITY PERIODS FOR DRUG DEV DATA
At the conclusion of the most recent Asia-Pacific Economic Cooperation (APEC) meeting in May, the TPP 11 announced that they were moving forward expeditiously with a trade bloc based on the original TPP structure. According to some member state representatives, the TPP 11 is seeking to conclude their agreement by the end of the year, which would minimize the changes from the original text. However, there are likely at least some differences from the TPP, most notably, shorter data-exclusivity periods for drug development data. As the negotiations proceed, we will see how the member states balance their interests and if they can reach agreement on both intellectual property protections and tariff schedules. One caveat exists, however; just as with the TPP originally, the protections of any agreement by the TPP 11 would likely extend only to member state companies. As a result, U.S.-based companies would not necessarily profit from the agreement.

INDIA OPPOSING PHARMA PATENT PROVISIONS
If the TPP 11 cannot reach agreement, or if they do not wish to adopt the entirety of the TPP framework, they may instead seek to join the proposed RCEP. The RCEP is expected to include all seven of the Asian and Oceanic states in the TPP, plus China, India, South Korea, Laos, Myanmar, Indonesia, the Philippines, Thailand, and Cambodia. During the negotiation and finalization of TPP, RCEP was kept on the back burner as a lesser, Chinese-led alternative. With the TPP losing steam in the U.S. at the end of 2016, the two South American TPP countries (Peru and Chile) expressed a desire in potentially joining RCEP. Thus, RCEP might end up an alternative to TPP for all but the three NAFTA countries.

Despite the Trump administration’s withdrawal from the TPP, the other member states are going forward with a low-tariff marketplace. We should soon see the results of the negotiations regarding the marketplace. Unfortunately for U.S.-based life sciences companies, however, the marketplace’s intellectual property protections will likely be less robust than they would have been under the TPP.