While some pharma companies struggle to backfill their pipelines, others find the opposite, that they have more development opportunities than they can pursue. While this may seem to be a nice problem to have — the luxury to be able to choose the very best of the very best — it also means that otherwise good drug candidates may be pushed down the list of priorities.

THE CHALLENGE OF TOO MUCH CHOICE
Agreements with academic institutions or smaller pharma companies often are the cause of companies having too many development candidates to choose from. This scenario also can be the result of a merger or acquisition, where the two companies have candidates that effectively duplicate each other or are not aligned with the newly consolidated company’s core area. Other reasons for drugs not being developed include a company or competitor shifting focus but not necessarily wanting to divest the drug, or if a project with a shorter timeline or a higher potential revenue stream takes priority, thus shifting planned trials.

The current business climate is squeezed for resources and demands a good return on investment. Because of this, companies, particularly those with shareholders, feel beholden to select the candidates that have the best chance of getting to the market and making a profit. This may be by selling large volumes or by targeting a smaller market that can bear a higher price.

“Some companies may not have the resources to develop all the drugs in their pipeline or may have the resources but feel that the drugs are not as promising as they would like,” said Ben van der Schaaf, principal at Arthur D. Little, an international management consulting firm. “Because of their focus on shareholders, Big Pharma companies are often after blockbusters, not drugs that make just a few hundred million.”

This leaves preclinical or even clinical stage drugs whose development may be terminated or forgotten for so long at the back of the (virtual) cupboard or fridge that their patent life becomes too short for economic development.

Moving drugs around in the pipeline may seem simply like the reprioritization of products seen in any industry, but van der Schaaf sees it as an issue with greater ramifications than simply business: “It means that promising drugs don’t get developed, meaning a loss of value and investment within a company and a group of patients that doesn’t get access to a potential treatment. The impact, of course, would be greater if it was an orphan disease.” 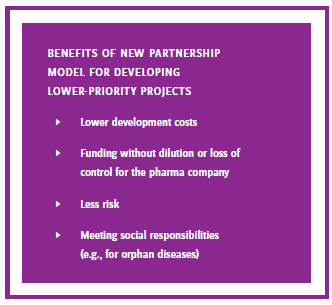 FINDING AND FUNDING A SOLUTION
Partnership has long been a way of spreading the costs of drug development, and models vary, including where equal partners share the work and the expense, or where one company funds research carried out by another. Partnerships can involve equity investment, leading to dilution, as well as loss of control over the product or the company’s development, and may not be the best option for a noncore project.

A team at Arthur D. Little has developed a new partnership model that could provide a route to developing these lower-priority projects at lower cost to the company by bringing in outside parties. As well as the company that owns the asset, the model would include one or more CROs to carry out the development and investors to fund the project. The investors could be traditional venture capital groups or nonprofit organizations that have specific objectives in healthcare. 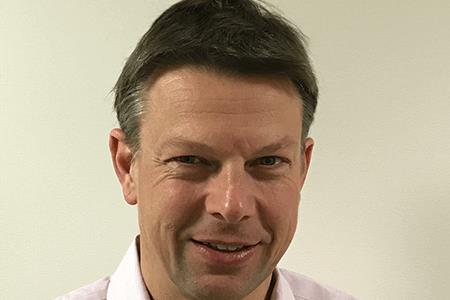 "[Traditional investors] still want to see a sound return, and are unlikely to commit until they can see the portfolio."

So, what’s in it for the partners? This approach provides an alternative route to funding without dilution or loss of control for the pharmaceutical company. It also allows the pharma company to pursue lower-priority areas at less risk. If addressing an orphan disease or meeting an unmet need in developing countries, this approach also could be seen as meeting social responsibilities.

“We are talking to pharmaceutical companies, and at least one is actively exploring the idea. The approach is attractive to them as it helps them to explore part of their portfolio that wouldn’t otherwise be developed, and could add value,” said van der Schaaf.

CROs could view the approach simply as a longterm contract that uses their standard processes and in-house knowledge and gives them access to a stable revenue stream, or as a way to gain experience in new therapeutic areas or in drug development. Some CROs have investment arms, so they could come on board as an investor as well. For the nonprofit investors, the model would help them to support development of drugs in areas that might otherwise be seen as unattractive by pharmaceutical companies.

“For nonprofit organizations such as the Gates Foundation, working with a pharmaceutical company in drug development can fit into their mission statement, for example by creating a therapeutic for a rare disease, or a lower-cost drug for a disease like malaria in a low-income country,” said van der Schaaf.

The Cystic Fibrosis Foundation (CFF) has taken a step towards this approach already, through its venture philanthropy model. The foundation provides earlystage funding for pharma and biotech companies that are working on drugs in cystic fibrosis, making its first large investment in 2000, when it provided Aurora Biosciences (now Vertex Pharmaceuticals) with $40 million to develop drugs targeting the core genetic defect in cystic fibrosis. This investment provided a solid return on investment when CFF sold its royalty rights for the Vertex cystic fibrosis treatments in 2014 for $3.3 billion, which could then be reinvested into research and development.

And finally, the traditional investors would look for a payoff to provide a return on investment, so they may be interested in drugs with a more mainstream profile.

“We have also found that there are traditional investors who like the idea — if the portfolio is right and the returns are attractive, then they want to invest. However, they will still want to see a sound return, and are unlikely to commit until they can see the portfolio,” said van der Schaaf.

BUILDING THE MODEL
The first step in the process would, as with any agreement, be a portfolio analysis and due diligence. While this business model isn’t the same as a licensing agreement, there also still needs to be a clear agreement put in place at the beginning of the process, addressing intellectual property, patents and know-how, and what happens with any products developed as part of the deal. This will vary between the three types of investors, and even from deal to deal.

The future of the model could be creating a vehicle that includes more than one pharma or biotech company. This would need to balance collaboration and competition, and would increase the pressure on information sharing.

“We see lots of benefits to this approach, but are aware that it also carries risks and challenges. But we believe that it has potential to work,” concluded van der Schaaf.