Angel groups are investing in biotech and are staying involved longer than ever before, creating new collaborations and financing options that raise more money than initial and subsequent rounds. Some say that today’s angels are similar to venture capitalists in the early 1990s. 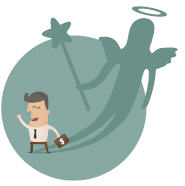 That situation was caused by the convergence of trends that have made massive changes in the early-stage investment landscape, says Christopher Mirabile, managing director of Bostonbased Launchpad Venture Group. Those changes include:

“When these trends combine, you have savvier entrepreneurs, companies that require less money, and angels with more money to invest,” Mirabile says.

Fox recalls that angel groups were initially wary of investing in life sciences because of the long, risky development timelines. That began to change in late 2010 when Merck bought Smart Cells for $500 million. At the time, Smart Cells had a glucose-sensitive form of insulin in preclinical development. “That acquisition changed how investors looked at therapeutics,” Fox says, and Avaxia has benefited. “We’ve raised $18 million from angels. Venture funds joined in the most recent round.”

Savara Pharmaceuticals also is angelfunded. So far, it has raised most of its money from four angel groups, including $17 million to support its Phase 2 clinical program for AeroVanc, an inhaled vancomycin for MRSA infections in cystic fibrosis patients.

ANGELS’ KNOWLEDGE DEEPENS
Often maligned as unsophisticated biotech investors, today’s angel investors have honed their skills and pooled their strengths, building savvy groups that are both willing and capable to fund follow-on rounds. They have, in fact, much in common with the venture capitalists of 15 to 20 years ago.

Rob Neville, CEO of Savara Pharmaceuticals, has pitched to angel groups in Istanbul, Monaco, and the U.S. “In the early days, angel groups were disorganized. A few folks would get together, talk, and perhaps invest. Now they have a well-defined process for conducting due diligence and making investment decisions.”

San Diego Tech Coast Angels, one of the largest angel groups in the U.S., has members with tremendous areas of specialization, says Jack Florio, board of directors. That includes insights into biotech as well as analytics.

Florio says members sometimes work privately with companies not yet ready for angel financing, providing management expertise and industry contacts. “We do a lot of mentoring, even with companies we don’t invest in.” The Seed Track grew from such efforts. This fund is dedicated to providing management expertise as well as financing of up to about $200,000.

SYNDICATION INCREASES FUNDING
The Angel Resource Institute’s Q2, 2013 Halo Report, indicates that angel groups syndicate 74% of their deals. “Angels have realized there’s real power in working together in groups,” Mirabile says. “It can be hard to get sufficient deal flow yourself, but syndication lets groups pool due diligence and makes it easier to negotiate terms sheets and support companies.”

For example, although the five chapters of Tech Coast Angels function independently, once a company is screened and approved as a potential investment, the terms sheet is presented to each chapter, thus increasing the potential size of the fund.

“Avaxia has a national syndicate of angels that is filling a real gap as venture funds have moved away from early stage,” Fox says. However, she cautions, although many funds have provided second-round financing, there’s no guarantee they will be willing or able to fund subsequent rounds.

Many of Savara’s original investors have participated in multiple financing rounds, even as the rounds have grown and additional investors have come in. The first round of $1 million was raised from about 12 angels in 2008, Neville says. All but one continued into the second round, which was $2 million. Funds raised continued to increase, and additional angels joined the program.

The most recent financing round (March 2013) was oversubscribed, so the company increased the round from $13 million to $16 million. The second tranche of this series B financing attracted Tech Coast Angels and the North Texas Angel Network, in addition to continuing investors from the Central Texas Angel Network and The Keiretsu Forum. “Our next round may include venture financing or a crossover investment prior to a potential IPO,” Neville says. Considering Savara’s stage of development and its future funding requirements, a well-established institutional investor is necessary, he says.

Savara’s funding rounds have been significantly higher than average for angel groups. The most recent Halo Report, for the third quarter 2013, released in January, reports median rounds of $520,000, down from $570,000 the previous quarter. The range of actual funding is wide, however. Florio reports Tech Coast Angels have funded rounds ranging from $250,000 to $1.5 million.

NEW DE-RISKING STRATEGIES EMERGE
“As an angel investor, you look for perhaps one in 10 investments to become big hits and a couple to have reasonably good returns. Half of the rest will die, and the remainder will muddle along without an exit,” Florio says. New strategies are being developed to reduce that risk.

Shared risk pools are among the newest trends. William Podd, executive director of Landmark Angels, Inc., says, “Investment groups often will find five or six companies working in a similar disease area and pool them into one investment fund.” In this situation, they typically bring in a big pharma investor to provide part of the due diligence and a possible exit strategy. “The investors bet that one of the companies will succeed and accept that as an exit strategy for the entire group.”

This form of shared risk is so new there’s been no research regarding what happens to the companies in the pool that aren’t part of the pharma exit. Podd is asking that question now. Logical options, he says, are to go the next round as normal or take their portion of any payout and pursue further development on their own.

Financings based on sharing revenues or royalties are two trends Mirabile is seeing. Rather than selling stock in a company, the firm essentially borrows money and pledges to pay a specified portion of revenue to investors until an agreed-upon return is reached. The downside, he says, is that “this approach may siphon off cash that could be used for growth.” Another financing option sells investors the right to buy stock for a predetermined price at some future date.

CROWDFUNDING
Mirabile considers crowdfunding complementary to angel investments and another way to bridge the financial gap between seed funding and venture capital. Until last September, crowdfunding had a way to raise money for specific projects and was popular among independent artists trying to fund music videos and indie movies. With the JOBS Act and enactment of its Title II provisions, crowdfunding became a viable fundraising option for companies wanting to tap accredited investors.

When Title III guidelines of the JOBS Act are approved, nonaccredited investors also will be permitted to invest. Their investments will be limited, however, and based upon income. Those earning less than $100,000 annually may invest up to 5% of their income or net worth, while those earning more than $100,000 may invest 10%.

Poliwogg and similar private exchanges are emerging to provide liquidity, not investment advice. The exchanges will make financial documents available to aid due diligence, but investors have direct relationships with the companies in which they invest, just like angel investors.

Angel groups are watching these developments and, cautiously, are beginning to use crowdfunding for some deals. “An angel group may list a deal to find angels outside its region to increase the potential funding amounts,” Mirabile says. This strategy is effective only when the round already is well-established and has attracted good-name investors.

INVESTMENT PERIODS LENGTHEN
Angels historically invested in a company for two to three years. Now that time frame has expanded to five or six years, according to Florio. The reasons are many. “Venture funds have more money to work with, so they need bigger opportunities,” Mirabile points out. Therefore, angels stay involved until companies can reach the point of attracting a venture fund or Big Pharma investor or floating an IPO.

Despite angels’ willingness for longerterm involvement, they still prefer quick turnarounds with minimum risk. “Angels have stopped focusing on the home runs,” Florio says. Instead, many of them are willing to accept moderate payouts with less risk. They often prefer to negotiate with a strategic buyer rather than take the product to the next milestone.

That’s why the Big Pharma involvement is so important. It provides the possibility of an exit strategy. Podd advises companies to work with angel groups that have capital precommitted by Big Pharma. That commitment indicates an inherent interest in possibly acquiring technology that is developed or of acquiring the company. Individual groups are looking for specific types of companies that fit the strategic direction of the Big Pharma investor. As Podd stresses, “Strategic relationships are very important, and the presence of Big Pharma lessens the risk.”