Pharmaceutical companies continue to struggle with pressure to sustain profitability, especially with the impending loss of an estimated $14.7B in revenue by 2013 as several blockbuster drugs go off patent. As a result, many pharmaceutical and biotechnology companies are utilizing varied strategies to boost revenue and profit margins while reducing fixed and variable costs. These include aggressive pricing, increased merger and acquisition activity, and increased efforts to in-license innovative therapeutics developed by smaller firms. Cost cutting has traditionally manifested as drastic reductions in overhead — IBIS World Industry Reports predict declining employment within the industry through 2015 at a rate of 1.2% per year on average — and as pharmaceutical companies zero in on controlling variable costs associated with drug development, the focus shifts toward streamlining the expense of clinical trials.

While valid concerns have been raised about the globalization of biomedical research, it is important to recognize the critical role of emerging countries in the advancement of medical science. Increased drug compound production over the past decade has raised the demand for clinical trial subjects, coinciding with lower participation rates in developed countries. So, there is a risk that the progress of medicine will slow. With increasing difficulty in sourcing patients for clinical trials, the concept of expanding the pool of available patients in emerging countries, combined with cost savings, seems like a double win.

Emerging countries are subject to the same global standards when it comes to clinical trials, especially industry-sponsored trials aimed at gaining regulatory approval on a new medicine. Concerted efforts by the local governments to improve their business environments and regulatory adherence have led to some emerging markets implementing stricter practices than developed regions.

So, as a sponsor, how do you gain by conducting clinical trials in emerging markets while limiting risk exposure? At Nice Insight, we looked at several global CROs that have expanded clinical trials to Eastern Europe, China, and Latin America in the past two years to see how their performance in quality, regulatory track record, and affordability compared to averages across all CROs in our study. The CROs studied were ICON, Quintiles, Pharmaceutical Product Development (PPD), PRA International, Chiltern, and PharmaNet.

According to Business Monitor International (BMI), ICON now operates in 14 countries in Asia, including South Korea, Singapore, and the Philippines, where it opened an office in March 2010. Quintiles Transnational, with a presence in 60 countries across the globe, recently expanded its clinical development services (CDS) into Beijing in order to accommodate growing business in China. Also in spring 2010, PPD launched a vaccine clinical research facility to service local and global biopharmaceutical companies looking to develop vaccines in China.

In December 2010, PRA International moved its early development services and product registration teams to a new office in Warsaw, Poland, after the company achieved strong growth in the area of clinical studies. Both Chiltern International and PharmaNet Development Group opened new offices in Brazil. In the first quarter of 2009 PharmaNet expanded its presence in Latin America, and Chiltern purchased the Brazil-based CRO Viguin in the second quarter of 2009 to further develop its emerging market presence.

Our goal was to examine whether these businesses had any significant differences in their customer perception score relative to our CRO benchmarks. When looking at average customer perception scores among all CROs in the Nice Insight Brand Index, the mean rating for affordability/cost was 68%, quality was 72%, and regulatory compliance averaged 74%. Comparing the scores of the selected global CROs to these benchmarks, we found no significant differences in these outsourcing drivers. Affordability averaged 68%, quality averaged 74% (+2% pts), and regulatory compliance averaged 76% (+2% pts). Looking at the individual companies’ customer perception scores (see charts on the opposite page), there was some variance among the global CROs. However, the difference in score was never greater than 9% points.

Conducting Clinical Trials In Emerging Markets Benefits The Sponsor, CRO, And Local Healthcare System
Regulations put forth by the FDA in 2008 — which dictate that all foreign studies conducted in association with a drug or medical device must follow GCP (good clinical practice) guidelines and require an independent ethical committee (IEC) — apply to all foreign clinical studies and should help to alleviate concerns about unethical or poor quality research. However, added assurance can be found in selecting a global CRO that operates in both established and emerging markets, especially because these businesses ranked at or above industry standards. Clinical trials conducted by a global CRO in emerging markets may indeed be a double win for the pharmaceutical companies and CROs — with reduced expenses and increased pool of patients, but it is also a win for the local healthcare system and economy of the developing country and for science in general. 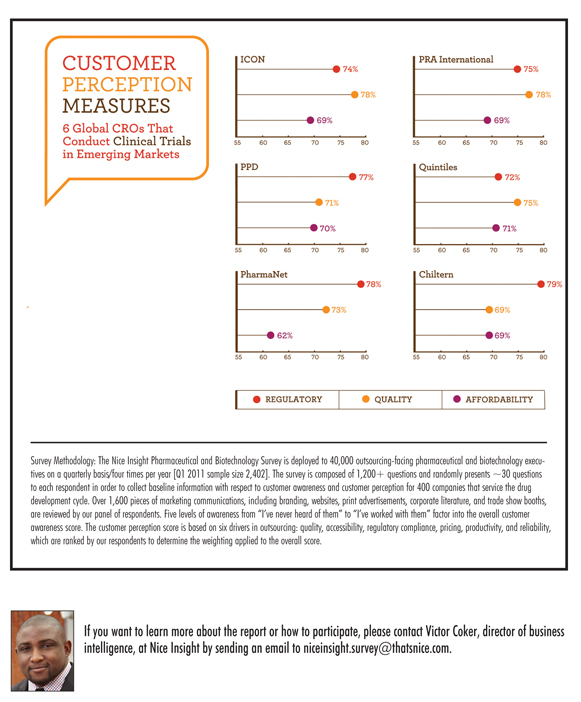