Quality management is a matter of increasing importance to the biopharmaceutical manufacturing industry. In recent years, facilities have been gravitating toward quality-related analytical programs, and our data tells us they are also getting tougher on suppliers.

Respondents to our latest industry survey — the 10th Annual Report and Survey of Biopharmaceutical Manufacturers  — are adopting several key steps to manage and protect their supply chains. We asked 250+ qualified decision makers from around the world to identify what their organization had done in the prior 12 months to assure consistent quality in raw materials and ingredient supply.

Half the industry respondents have “demanded our suppliers demonstrate higher levels of GMP/GLP compliance,” a figure substantially higher than the 39 percent who had done so in the 2012 survey. Another 47 percent said they “implemented more dual-sourcing,” up from around 40 percent in 2011’s study. In addition, 47 percent stated they had audited secondary suppliers.

CMOs are more likely to audit their suppliers than biomanufacturers.

Clearly the industry is intent on managing its suppliers by more closely vetting those companies and expanding the scope of the vetting process. But those aren’t the only measures being taken.

Respondents also said they had audited their suppliers more frequently (46.9 percent), verified vendors’ certificates of analysis (37.5 percent), specifically identified secondary suppliers (37.5 percent), and verified the origin of individual ingredients more carefully (34.4 percent). Interestingly, relative to prior years, the proportion of respondents auditing their suppliers more frequently has retreated, while a greater percentage attest to more careful verification of individual raw materials and components. However, facilities still relying on their suppliers rather than manufacturing some components in-house (7.8 percent) said they had adopted this approach in the previous year.

U.S. vs. EU: Different Approaches to Materials Management
Looking at the critical ways facilities manage their materials supply chain, we compared the responses from end users in the U.S. and the EU, and we compared CMOs with all global biotherapeutic developers.

With the trans-Atlantic breakdown of supply and materials management, our study found variations in approaches between U.S. and Western European companies:

We also evaluated how CMOs behave. In this instance, we found:

The differences between how CMOs and biomanufacturers approach elements of materials supply-risk mitigation are likely due to their varied business models rather than to a differing commitment to the task. For example, biomanufacturers could request that their CMOs audit certain suppliers for them. Further, because CMOs deal with more diverse products and suppliers, they are necessarily going to be conducting a broader array of audits.

Both CMOs and biomanufacturers do agree on the value of more and better communication with their suppliers. Our study found a hike in the percentage of respondents who reported holding more frequent meetings or calls between their quality staff and their suppliers’ quality/manufacturing staff. This jump appears to have been largely driven by CMO respondents, none of whom in prior years had reported increasing their communication efforts. This is consistent with separate results from our survey in which communication problems with their clients shot to the top of CMOs’ complaints. In fact, every single CMO respondent to the study said that “clients not communicating effectively” was at least a “common problem” in dealing with their clients. That 100 percent rate was up from 80.4 percent just three years prior. Together, the data strongly indicates that CMOs’ best practices in client management include paying more attention to better, more effective communication in order to resolve potential issues.

Focusing the Materials Management Microscope
Materials and supply chain management and oversight are becoming even more essential as the industry continues to adopt single-use/disposable bioprocessing equipment. Here, bioprocessing equipment is repeatedly purchased, used, and disposed of, rather than being permanently installed and operated by internal staff. Repeated equipment purchases (with essentially every piece of equipment in contact with the process stream) involve hundreds of new and fully sterile products for each bioprocessing run/ batch. Single-use systems require more rigorous control of related supply chains, compared with rather standardized stainless-steel equipment. Going forward, we can expect users will want more documentation from suppliers showing component suppliers’ compliance with regulatory requirements. This will lead to more pressure on suppliers to demonstrate higher levels of compliance, broadening the scope of their audits. 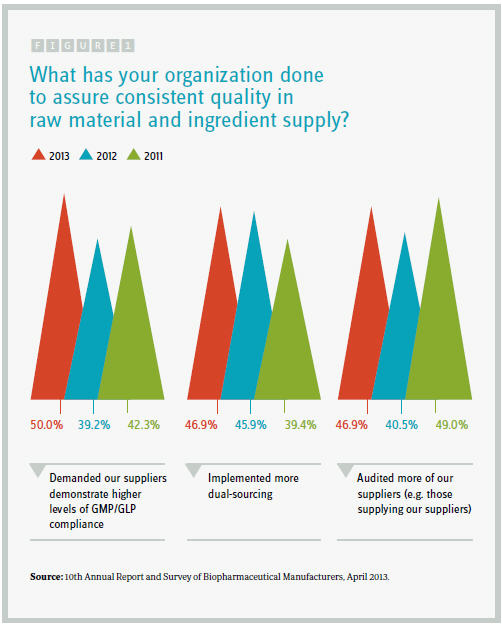 Survey Methodology: The BioPlan Annual Survey of Biopharmaceutical Manufacturers yields a composite view and trend analysis from over 300 responsible individuals at biopharmaceutical manufacturers and CMOs in 29 countries. The survey included over 150 direct suppliers of materials, services, and equipment to this industry. This year’s study covers such issues as new product needs, facility budget changes, current capacity, future capacity constraints, expansions, use of disposables, budgets in disposables, trends in downstream purification, quality management and control, hiring issues, and employment. The quantitative trend analysis provides details and comparisons of production by biotherapeutic developers and CMOs. It also evaluates trends over time and assesses differences in the world’s major markets in the U.S. and Europe.