Biologics Manufacturing In China: Competition Heats Up Among CMOs & Their Clients

The past several years have seen rapid growth of contract manufacturing organizations (CMOs) in China in both number and size. The main drivers of this relatively robust expansion include:

According to BioPlan research, China is also demonstrating clear investment interest in participating in global markets for both innovative biologics and biosimilars produced at GMP quality levels.1 These factors are creating a strong market environment for CMO services.

Despite the business opportunities and recent reforms, China remains a difficult market to understand and reach.  Its regulatory framework remains very different from those in Western countries; however, this continues to evolve.  In July 2017, China became a member of ICH (the International Council for Harmonisation of Technical Requirements for Pharmaceuticals for Human Use), which is accelerating the integration of China's regulatory system with the rest of the world. But the route from IND application to granting of a BLA is still complicated. For example, the current regulatory framework provides a priority review track for IND applications, but access to priority review is widely regarded as the applicant needing a good working relationship with the National Medical Products Administration (NMPA). For an emerging market like China, local CMOs not only can make up for the shortage of the big pharmaceutical companies’ self-owned resources but can also establish new production sources for them. Local preferential policies and support can also facilitate the approval process and marketing in the local markets. Under such circumstances, quite a few multinational companies have decided that having a local CMO partner would be a good strategy to get their biological therapeutics pipeline launched in China. In recent years, we have seen quite a few cases in that direction, both in biosimilar and innovative biologics and from both Big Pharma and relatively small biotech companies. 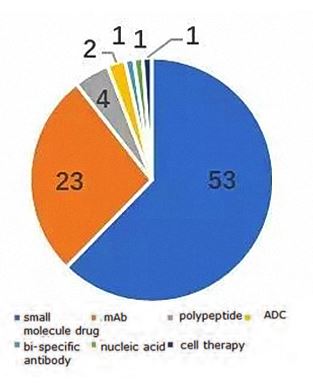 Figure 1: Drug projects applying for IND in the U.S./China1

The Chinese CMO sector and biopharmaceutical industry, including WuXi Biologics, AutekBio, Chime Biologics, MabPlex, and many others, are founded and led by returnee scientists with Western industry experience. The flow of returnee scientists has built the industry and significantly increased the know-how of bioprocessing in China.

The industry is currently dominated by one leader, WuXi Biologics, but other companies are growing quickly. WuXi’s domination is clear in revenue, capacity, as well as qualification/certification. In 2019, 35.3% of WuXi Biologics total (USD $570M) revenue was from China (~USD $200M).  This also translates to around 35% of the total bioprocessing outsourcing services/CMO market in China.1 WuXi is currently the only FDA/EMA-certified biologics CMO in China, while most other competitors have no immediate plan to get the certification. So, its first-place status will likely not be replaced by any single competitor in the foreseeable future. However, we can see that other biologics CMOs are also making progress, and multiple industry insiders have stated that though WuXi is expanding quickly, its total market share in China is and will be gradually decreasing.

Significant pricing structure differences exist in this industry in China. First-tier companies such as WuXi Biologics and Boehringer Ingelheim Shanghai can often command Western-level pricing, while the second-tier CDMOs have been known to compete on price; some may charge a fraction of what the segment leaders charge.  The third-tier companies seek to compete even more aggressively.

Competing With Your Own Clients For Commercial-Scale Bioprocessing Deals

The most important factor behind this preference is cost. As most of the mAb pipelines under development by domestic companies are biogeneric in nature, the projected profit margins would be significantly less than those of mAb therapeutics originating from multinational pharmaceutical companies. While outsourcing of clinical-scale bioprocessing is a common strategy to speed up development by start-up biotech companies, outsourcing of the whole manufacturing process is widely regarded as too expensive, as well as too risky, as developers are afraid of losing control of the whole manufacturing process.

There are also concerns of limited options in outsourcing of commercial-scale bioprocessing. At present, only WuXi Biologics is widely accepted by the industry as fully capable of commercial-scale bioprocessing. Many VCs and other financing groups behind mAb developers plan for the developer company to go public as an exit route, and Chinese investors are known for their preference for fixed assets, such as land and factories, over intellectual property, such as pipeline, patents, etc. Such a preference has made many domestic developers view building an in-house bioproduction facility as a strategy to get higher valuations in IPOs. Up until 2019, it had also been relatively easy for mAb developers in China to get resources for building an in-house facility, as investors’ enthusiasm gives high valuation to such companies, while municipal governments also often help developers with access to bank loans and cheap land.

As a result, few domestic developers have turned to external partners for commercial-scale biomanufacturing. Even BeiGene, the first partner with Boehringer Ingelheim’s facility in Shanghai, a major supporter of the MAH reform, started its own commercial-scale bioprocessing facility in Guangzhou for production of its PD-1 mAb. Up to now, BioPlan’s internal studies have only identified a few commercial-scale contract manufacturing deals with China-based CMOs, among which the majority are with WuXi Biologics.

WuXi Biologics’ financial statement also shows that late-phase (Phase 3) and commercial manufacturing make up only ~6.6% of its projects.2 In the first half of 2020, the company’s late-phase projects increased by 26.7%, from 15 in the same period last year to 19 as of June 30, 2020, while commercial manufacturing deals showed no growth. As Dr. Xu Fei, the CEO of TobioPharm, states, “We are competing not only with the industry leader and other CDMOs, but more also against our clients’ intention to build in-house facilities.”

Some industry insiders believe made-in-China mAb therapeutics will remain a low profit margin business, which makes outsourcing of their commercial manufacturing a difficult decision, as the most recent NRDL (National Reimbursement Drug List) negotiations show that policy makers want to force mAb developers to reduce prices significantly. For example, sintilimab from Innovent Bio, the only PD-1 mAb listed in the NRDL, had its price reduced by ~64%.1 However, not all are that pessimistic. Some CMOs think the current slow growth of commercial-scale outsourcing may be simply due to the sluggish biologics pipeline – the wave of BLAs for mAb therapeutics is only now beginning to arrive in China. With the newly updated Drug Administration Law, which levies higher penalties on developers that violate quality requirements, and the shortage of a skilled bioprocessing workforce in China, a greater portion of the ~200 domestic developers of mAbs may have to use CDMOs for commercial-scale production as the wave of domestic BLA filings for mAbs arrives.

Currently, there is a decline in the trend for investments in mAb therapeutics in China, as witnessed by fewer deals in 2019 than in previous years. Municipal governments are also running out of funds to support every mAb developer in their region to build in-house facilities. Recovery from the COVID-19 pandemic is also likely to reduce funding and developer construction of bioprocessing facilities, other than those dedicated to related vaccines and therapeutics. Instead, developers may turn to the strategy of supporting a commercial-scale manufacturing platform that can provide contract manufacturing services to multiple other developers, i.e., they will offer CMO services.

Chinese investors’ preferences for fixed assets over intellectual property may also change. In May 2018, the Hong Kong Stock Exchange changed its regulatory requirements to allow biotech companies without revenue to be listed on its main board and Shanghai’s STAR market followed suit shortly after. The policy moves are widely regarded as a boost to innovator companies without much fixed assets, and if their pipeline can translate to high valuations, investors will likely not insist on the company building in-house facilities. As more than 30 mAbs from domestic developers are already at Phase 3 stage, we project that China will need additional capacity of 100,000 L or more annually in the near future, which could possibly translate to business opportunities for biologics CMOs and developer companies offering CMO services.

Looking Into The Future

While our studies, supported by quite a few industry insiders, project significant growth of outsourced commercial-scale manufacturing in the near future in China, certain bottlenecks remain. China will likely need to continue to expand its CMO industry to reduce reliance on the largest suppliers, such as WuXi Biologics. To develop a healthy CDMO industry, multiple players in the field with solid reputations for quality and timely delivery are required to make outsourcing of commercial manufacturing of biologics a more mainstream decision.  Many analysts project this will be the case within this decade. Meanwhile, regulatory hurdles involving subcontracting need to be relaxed.  Few companies are capable of providing full solutions (e.g., from early stage development to fill-finish1). These process operations require skills and staffing rarely found in a single company.  But the direction and trends in China’s biologics CMO sector continue to point toward expansion of commercial manufacturing in the future, especially in conjunction with CDMOs. When this will occur remains to be seen.

Vicky (Qing) XIA is the senior project director at BioPlan Associates. She has an MS in biology from the University of Texas-Houston, and an MBA from the University of Pittsburgh. She has experience in consulting, business development, and alliance management in China’s biopharmaceutical industry. Her expertise includes developing research and analysis on multiple global market segments, and she has managed a team of industry experts and projects. She can be reached at vxia@bioplanassociates.com.

Leo (Cai) Yang is the project manager at BioPlan Associates. He has experience in biotech and pharma business development, and10 years in market research. He graduated from East China Normal University with a BA in biotechnology in 2006, and has worked with equipment manufacturers in the pharmaceutical and medical device industries in Switzerland, Austria, and Germany. He has also managed studies involving new biopharmaceutical technology applications in China, including analysis and strategy development. He can be reached at cyang@bioplanassociates.com.