Nearly 65% of biomanufacturers are planning to increase their budgets for new technologies to improve efficiencies and costs for downstream production, and three out of every five are increasing funding for new upstream production technologies. All of these statistics come from data from our newly released 9th Annual Report and Survey of Biopharmaceutical Manufacturers. These are not incremental changes, either: Almost 1 in 10 biomanufacturers will be making large increases (of 20% or more) in these areas, while 1 of every 5 plan an increase of 10% to 20%.


Budget increases are not limited to technologies that can improve efficiencies and cut costs, though. Biomanufacturers are looking to up the ante on big ticket items, too. On a note sure to inspire optimism, 15% of respondents are planning an increase of more than 20% in new facility construction. This is a greater proportion than are planning any level of decrease in funding for new facility projects, at 12.8%. A clear sign of industry segment growth, new capital equipment, is a focus, too, with 12.3% planning large increases and 46% planning a small-to-moderate increase. Again, this compares with fewer than 1 in 10 who forecast a decrease in funding for capital equipment. Compared with the past few years, these increases are substantial.

INCREASED FUNDING
With Big Pharma layoffs getting attention in the news, it is also encouraging to see that biomanufacturers are planning to increase their budgets for a variety of staffing-related causes. Roughly half of the 325 biomanufacturers we surveyed forecast an increase in funding to hire new operations staff and new scientific staff. Fifty-three percent are also upping their budgets for operations staff training, including 23% who plan to increase funding by at least 10%.

Comparing biotherapeutic developers and CMOs, we find that both are in relative agreement regarding areas most are tapping for increased funding. The vast majority of CMOs are increasing their level of spending in new capital equipment, with new downstream and upstream technologies not far behind. The area for which most are projecting a more than 20% increase is in new facility construction (33.3%).
Among biotherapeutic developers (in comparison to  CMOs), about three in five (61.9%) are scheduling a budget increase in new downstream technologies, followed closely by the proportion increasing their funding for new upstream technologies (58.1%) and new capital equipment (54.4%). As with CMOs, new facility construction sees the largest proportion, expecting a more than 20% increase in budget levels over the next 12 months (11.9%).

Not all areas are slated for a loosening of the reins, though. Just ¼ of respondents (biotherapeutic developers and CMOs combined) said they would be increasing their funding for outsourced biopharmaceutical manufacturing, and only 4 in 10 would be increasing their general budgets for in-house biopharmaceutical manufacturing or basic R&D for new therapeutic products. Even so, it is difficult not to get the sense that the industry is on a spending upswing: 4 out of 5 respondents will be either maintaining current spending levels or increasing them by some level for each of the areas we surveyed. This is certainly reason for optimism.

When we average out the planned increases and decreases across respondents, we find that biomanufacturers are reserving their largest budget increases for new technologies for downstream (6.4%) and upstream production (6.0%), much the same as they were last year. What this means is that the emergence from the economic perils that started over the past couple years has continued on into this year.
Healthcare segments historically have been relatively insulated from adverse economic situations, and this year we continue to see evidence that the economy within this segment has leveled out, witnessed by the uptick in budget allocations, especially in areas that improve performance for manufacturing activities and areas involving productivity. Budgets are favoring spending on productivity, which includes internal new technology investments (both upstream and downstream), and process development and optimization. 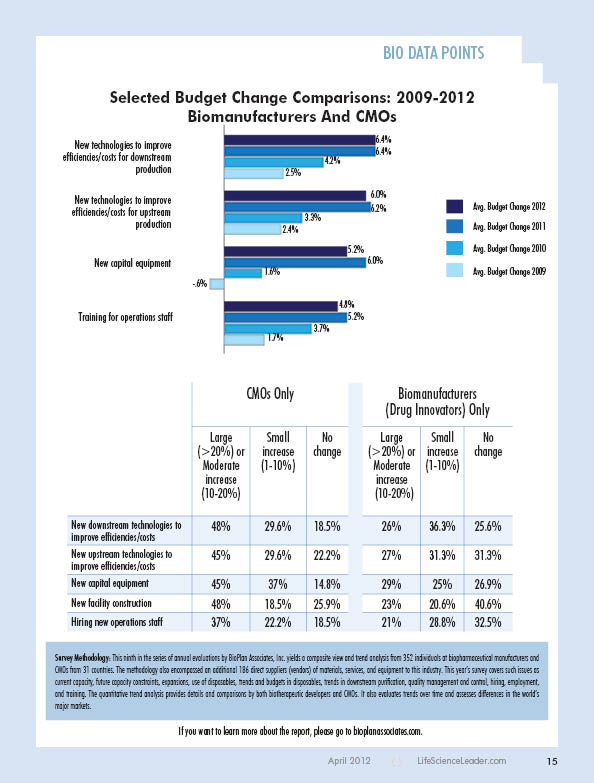