According to our annual evaluation of biopharmaceutical trends, in 2013 the biomanufacturing industry plans to address common challenges through process improvements — especially in areas of downstream process improvements and single-use implementations. In addition, analytical methods to evaluate and monitor bioprocessing continue to be hot buttons. 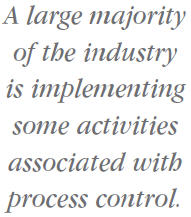 Process improvements come into play specifically because the industry requires continual, incremental performance improvements in biomanufacturing to remain competitive and to manufacture at higher quality and lower costs. In our 9th Annual Report and Survey of Biopharmaceutical Manufacturers, we asked more than 300 biomanufacturers around the world to identify the factors in biomanufacturing that create performance improvements. We identified 15 key areas. The largest portion, 72% (the same as last year), cited overall better control of processes. This relatively general response indicates that a large majority of the industry is implementing some activities associated with process control. Also high on the list: better process development, indicated to contribute to “significant” or “some” improvements in performance by 64% of respondents.

Because process improvements and performance are becoming increasingly critical to competitiveness, the industry has been very resistant to cutting back on funding for these improvements. Indeed, this year funding and budgets for upstream and downstream process improvements have accelerated their lead in terms of budget allocation compared to all bioprocess operations. In addition, when we asked respondents the top operational changes they have made due to recent global economic conditions, just 1.1% of biomanufacturers had cut funding significantly for manufacturing process improvements.

Process Improvements Combat Bottlenecks
Process improvements prove particularly important in downstream operations and to address bottlenecks. This year, when we measured implementation of different activities to combat bottlenecks, we found that general process-driven improvements were just as popular as consideration of new technologies. That is, the way facilities are tackling their downstream purification operations is to optimize their running conditions (43.4%), rather than introducing new technologies. This involves developing downstream processes with fewer steps (42.1%), reducing the number of process steps (39.5%), and investing in downstream process development (31.6%).

Process Improvements for Biosimilars
Players in the biosimilars/biobetters market will have to compete against the original reference product and multiple other biosimilar/biobetter versions. Cost to the consumer will likely be the number one factor affecting market share for most products. Thus, the cost of goods or cost of manufacture is a critical factor. Many biosimilar/biobetter developers are adopting the newest and improved bioprocessing methods, expecting to achieve process improvements lowering the cost of manufacture. These companies simply have to minimize the costs of manufacture to be competitive.

Survey Methodology: The 2012 Ninth Annual Report and Survey of Biopharmaceutical Manufacturing Capacity and Production in the series of annual evaluations by BioPlan Associates, Inc., yields a composite view and trend analysis from 302 responsible individuals at biopharmaceutical manufacturers and CMOs in 29 countries. The methodology also included 185 direct suppliers of materials, services, and equipment to this industry. This year’s survey covers such issues as new product needs, facility budget changes, current capacity, future capacity constraints, expansions, use of disposables, trends and budgets in disposables, trends in downstream purification, quality management and control, hiring issues, and employment. The quantitative trend analysis provides details and comparisons of production by biotherapeutic developers and CMOs. It also evaluates trends over time and assesses differences in the world’s major markets in the U.S. and Europe.