Biopharmaceutical Outsourcing To CROs In Emerging Markets Surges For 2015

According to Nice Insight’s 2015 pharmaceutical and biotechnology outsourcing survey, 63 percent of global sponsors outsource their drug research and development to global CROs in emerging markets, a remarkable 68 percent jump from the 2014 survey, when only 43 percent reported outsourcing to these markets. In addition, more sponsors (88 percent) today will consider working with a CRO in an emerging market, up from 84 percent in 2014. 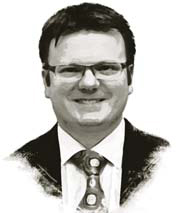 What’s driving the trend to emerging markets? As biopharmaceutical companies continue to struggle with the rising cost of drug development, they are challenged to improve productivity and efficiency, streamline clinical trials, and meet more rigorous regulatory and quality assurance requirements in order to sustain profitability — in essence, to achieve far more for less cost. To that end, many are implementing strategies to boost profit margins while reducing fixed and variable costs. As part of their strategy, they are looking to emerging market CROs to help them meet these challenges.

While there are valid concerns about globalizing clinical research, emerging markets such as China, Eastern Europe, Turkey, Argentina, and Brazil play a critical role in advancing medical science. Emerging markets offer a number of attractive features, such as the potential for reduced R&D costs and development time and the availability of a large, affordable talent pool with nearly comparable technical capabilities and skills.

"As the trend to globalization of clinical trials continues, sponsors and their CROs seek new solutions to lower costs and improve trial efficiency."

As the trend to globalization of clinical trials continues, sponsors and their CROs seek new solutions to lower costs and improve trial efficiency. Along with fierce competition today for clinical trial sites and an escalating number of clinical trials, they face strong competition for patients in certain therapeutic areas, increasingly complex trial protocols, and increased regulatory requirements. The cost and time to secure well-qualified sites and enroll patients have soared.

For clinical trials, emerging markets offer attractive features, with the potential for faster, less costly clinical trial enrollment and more cost-effective trial conduct. Typically, these markets also have a larger, clinically naive patient population as potential trial subjects than established markets such as the U.S. and Western Europe, and offer a means of streamlining trial costs.

For the minority of sponsors (12 percent) who have not considered outsourcing projects to emerging market CROs and/or CMOs, more than half (57 percent) are primarily concerned that the quality level is too risky, and more than onethird (36 percent) say the logistics are too complicated. Other concerns were regulatory compliance (29 percent), intellectual property (14 percent), and communications challenges (14 percent).

According to the survey, global sponsors that outsourced clinical trials to CROs conducted considerably fewer of their outsourced trials in the U.S. and Canada in 2015 (19 percent) than in 2014 (31 percent). India and Western Europe also decreased as locations selected for clinical trial outsourcing (18 percent to 11 percent and 14 percent to 10 percent respectively). Clinical trial outsourcing continues to rise in China (15 percent in 2014 to 18 percent in 2015) and more than doubled in Argentina and Brazil (7 percent to 15 percent). Outsourcing trials also increased in Eastern Europe and Turkey (9 percent to 10 percent), the Middle East and Korea (both 2 percent to 6 percent), and Thailand and Vietnam (1 percent to 5 percent). (See figure 1.)

Countries in emerging markets are subject to the same global standards for clinical trials. Local governments have supported the trials, making efforts to improve their business environment and regulatory adherence.

COMPARING QUALITY, REGULATORY, AND AFFORDABILITY OUTSOURCING DRIVERS
The Nice Insight survey compared the performance of global CROs that have expanded clinical trials to emerging markets to see how their quality, regulatory, and affordability outsourcing drivers compared to the CRO benchmarks and how performance changed from the previous year. Looking at the 2015 clinical research benchmarks for the CROs included in the study, the guiding score for affordability was 79 percent, quality was also 79 percent, and regulatory was 84 percent. These benchmarks are higher than the 2014 levels, with regulatory increasing by 10 percent, affordability up 9 percent, and quality up 7 percent.

When comparing the scores of global CROs with these benchmarks, we found no significant differences in these outsourcing drivers. In 2015, the CRO scores were only 1 to 2 percent below the benchmarks. Looking at the changes in the average score from 2014 to 2015, the data shows a positive shift for regulatory and quality while scoring 2 percent below the 2015 benchmark and improved affordability while scoring 1 percent below the benchmark. These score analyses imply that choosing a global CRO for outsourcing clinical trials to an emerging market is a low-risk approach to addressing both cost savings and securing the targeted patient populations.

The report also forecasts that by 2020, emerging countries combined will likely account for 25.2 percent of the global clinical trial market, up from 15.7 percent at present.

More and more trials now include global trial sites, and increasingly more drug development is being outsourced to global CROs. Large global CROs that are already well established in emerging markets are well positioned for success in the increasingly competitive biopharmaceutical industry. 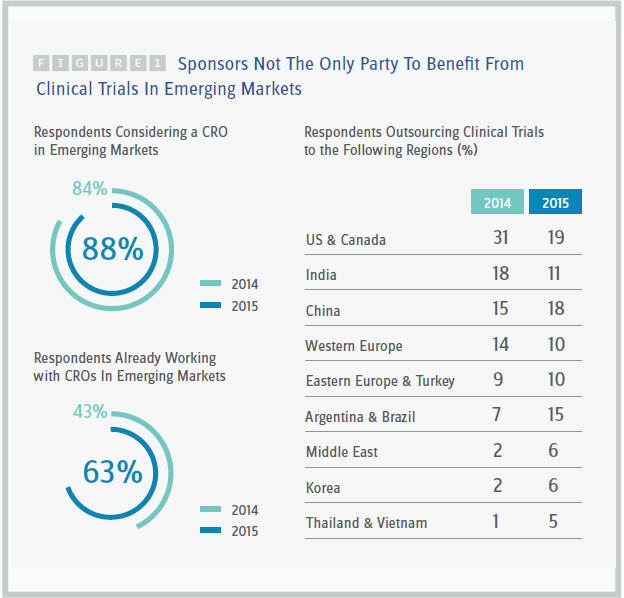 Survey Methodology: The Nice Insight Pharmaceutical and Biotechnology Survey is deployed to outsourcing-facing pharmaceutical and biotechnology executives on an annual basis. The 2014-2015 report includes responses from 2,303 participants. The survey is comprised of 240+ questions and randomly presents ~35 questions to each respondent in order to collect baseline information with respect to customer awareness and customer perceptions of the top ~125 CMOs and ~75 CROs servicing the drug development cycle. Five levels of awareness, from “I’ve never heard of them” to “I’ve worked with them” factor into the overall customer awareness score. The customer perception score is based on six drivers in outsourcing: Quality, Innovation, Regulatory Track Record, Affordability, Productivity, and Reliability. In addition to measuring customer awareness and perception information on specific companies, the survey collects data on general outsourcing practices and preferences as well as barriers to strategic partnerships among buyers of outsourced services.

If you want to learn more about the report or how to participate, please contact Nigel Walker, managing director, at That’s Nice by sending an email to nigel@thatsnice.com.