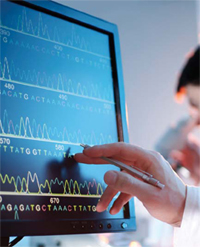 The term companion diagnostics likely was coined about 10 years later, when the Human Genome Project began paying dividends in the form of new scientific knowledge about the genomic underpinnings of cancer. “The science is beginning to lead us, and we’re beginning to reap the rewards of the science by identifying biomarkers and correlating them with outcomes,” said Greg Zdechlik, COO of diagnostics at Eli Lilly and Company. “I believe we’re now at the beginning of a large wave of companion diagnostics.”

In the next decade, industry experts said that most, if not all, new oncology compounds submitted for FDA review will be linked to companion diagnostics that screen for already known genomic mutations or newly identified single nucleotide polymorphisms. Because they enable physicians to select the right drug for the right patient at the right time, CDx may prove to be the enabling technology for personalized medicine.

“Twenty years ago, the paradigm was that for every 100 cancer patients treated, 10 benefitted,” said Gbola Amusa, who heads European pharmaceuticals research and is global pharmaceuticals coordinator at UBS banking and financial service group. “If you could, instead, treat only those 10 patients, you would get the same result without putting through the 90 who don’t benefit — and society gains. Ten years from now, this will be the standard.”

Oncology Dominates CDx
Oncology dominates the CDx market because so many of the advances in understanding the genomics of disease have occurred in cancer. However, biopharmaceutical companies have not ignored other disease areas. At Lilly, for example, each disease therapeutic group is responsible for determining whether a tailoring strategy is viable for each compound under development, said Zdechlik. Every molecule will not have a CDx, but at least a tailoring strategy would have been considered, he added.

Because of its potential to limit new drugs to only those patients who stand to benefit, CDx provides a way for biopharmaceutical companies to address payers’ concerns about the costs of medical treatments. “Obviously, payers are driving for more efficiency in how healthcare dollars are spent,” said Zdechlik. “Before paying for a new therapy, payers want to know whether the drug could work. This could be accomplished through a predictive biomarker, or it could be accomplished by having biomarker evidence that therapy is providing benefit,” he added. CDx provides an objective measure of the drug’s potential to benefit a specific patient.

In addition to appealing to payers, CDx may allow biopharmaceutical companies to redesign clinical trials so that they enroll only those patients who are the most likely to benefit from the experimental compound. However, in general, CDx do not lessen the challenges of drug development and commercialization, because developing and commercializing diagnostics also is challenging work. “As with any innovation, developing companion diagnostics requires charting a new path, and that brings new challenges,” said Ron Ellis, CEO and president of the biotech company Endocyte.

“Identifying the biomarkers for a companion diagnostic is incredibly complex and requires a great amount of hard work,” said Zdechlik. “I often compare it to searching for a needle in a haystack, since scientists must sift through multiple data sets to identify and correlate the signal or biomarker that reflects the patient’s responsiveness to a therapy.”

“One of the reasons that choosing biomarkers can be difficult is sometimes you don’t know what sort of differential drug response you will get until at least 100 patients have been treated, which means that the drug is typically in Phase 2 before this information is available,” said Dr. Stephen Little, VP of personalized healthcare at Qiagen.

Ideally a new drug and its CDx not only are simultaneously submitted to and approved by the FDA and the European Medicines Agency, but also are commercially launched at the same time. Timing is crucial to achieving a concurrent approval and launch. If the FDA labeling for the drug requires that the diagnostic test be used before the drug is administered, and the CDx is not yet approved or in the hands of laboratory directors and pathologists, both products could sit on the shelf, depriving patients of a potential highly effective and safe therapy and reducing the revenues of both partners. Thus, the biopharmaceutical company has to dedicate substantial time and effort in communicating and coordinating with the diagnostic partner to ensure “that the diagnostic is being developed in a regulatory-compliant manner that is faster or equal to development of the drug,” said Zdechlik.

Personalized Medicine Unites CDx and Pharma
Diagnostics and biopharmaceuticals have a lot to learn about each other because their core expertise, development process, regulatory frameworks, and commercialization differ, experts said. “Traditionally, the core of diagnostics used to be chemistry and engineering, whereas the core of pharmaceuticals was the information and utility of the clinical sciences,” said Little. “Personalized healthcare brings these two things together.”

The regulatory process is more complicated in the U.S. than in Europe, said Little. At the FDA, the review of CDx occurs in the Center for Devices and Radiological Health, not the Center for Drug Evaluation and Research. The split means that the diagnostics and pharmaceutical partners must devote time and energy to ensure that both FDA divisions are informed about the total picture, said Zdechlik.

Conversations with the FDA should occur before clinical studies are launched, Ellis said. “Particularly in the case of imaging diagnostics, we are breaking new ground, so we have worked closely with the FDA to ensure we are gathering the data they’ll require for potential regulatory approval,” he said. “We have communicated early and often with the FDA,” added Ellis, whose company, Endocyte, has developed a new category of CDx: companion imaging diagnostics to identify the folate receptor, which is overexpressed in ovarian as well as several other cancers.

Conversations with the FDA should occur before clinical studies are launched, Ellis said. “There are things you didn’t anticipate. And you don’t want to do something and then have the FDA come back and say, ‘You didn’t do it right; you have to do it this way,’” he added.

Stringent Review of CDx Occurs at FDA
“The FDA is a very open organization,” said Little. “Colleagues in the pharma industry are often surprised when I talk about the openness, frankness, and helpfulness of our conversations with the FDA’s device industry regulators in diagnostics.”

Many people in the biopharmaceutical industry also are surprised that a CDx “most likely will require a PMA (premarket approval) application, which requires a very stringent regulatory review process,” said Zdechlik.

The FDA, which issued draft guidance on companion diagnostic devices in 2011, “has had a consistent message for many years that the risk profile of the test should match the risk profile of the drug,” said Little. “The agency expects to see the highest standards in analytical studies to prove the test’s clinical validity and clinical utility. They want to know that the test actually works and that the measurement is linked to a specific patient outcome.”

The diagnostic company has to “own the relationship with the laboratories and the pathology community,” said Zdechlik, just as the biopharmaceutical company is responsible for reaching the physician community.

CDx Now Includes Imaging
In oncology, CDx is often used more to predict rather than to monitor a patient’s response to a specific drug, whether it is a new compound or an already approved and marketed medication. Until recently, the CDx methods were primarily tissue and blood analysis. Endocyte has created a third category by using companion imaging agents.

Endocyte’s CDx, developed in-house, consists of a small molecule targeting ligand, which binds to the folate receptor and is linked to an imaging agent that identifies tumors that overexpress this target. In addition to using the targeting ligand in the diagnostic, the company’s scientists have linked it to vintafolide, a novel small molecule drug conjugate that the researchers developed as a potential treatment for patients with folate receptor-positive cancers, which include many platinum-resistant ovarian cancers. “Eighty percent to 90% of ovarian cancers have this receptor,” said Ellis.

Vintafolide is being evaluated in folate receptor-positive ovarian cancer patients in a Phase 3 clinical trial as well as in a Phase 2b clinical trial in non-small cell lung cancer (NSCLC) patients. This year Merck obtained a worldwide license to commercialize vintafolide.

Using its CDx imaging analysis, Ellis said, “We can ensure that the right patient gets the right drug. If you provide benefit to patients, you’ll achieve success commercially.”