Today’s biopharmaceutical manufacturers are expecting suppliers to innovate better sensors because regulators continue to require increasingly detailed and complex measurement of processes. Even as the prevalence of single-use equipment spreads, the quality of sensors is not keeping up; few single-use sensors are sufficiently robust enough to handle current requirements. Additionally, sensors are limited to relatively few basic analytes.

Clearly, this is an area of opportunity that is in need of major improvement. And demand is not just anecdotal. Results from our latest study — the 11th Annual Report and Survey of Biopharmaceutical Manufacturers — confirm that the industry is still calling for innovation in single-use sensors.

Clearly, the industry feels the time has come for the introduction of better sensors.

Sensors Now Sit Atop the Innovation List
We asked more than 230 industry participants to consider the new products and services being developed by suppliers, and to cite the top five areas on which they expect their suppliers to focus development efforts. Of the 21 areas we identified, “disposable probes and sensors” were the most commonly cited (45 percent), which outpaced demand for innovation in disposable bioreactors (40.3 percent), cell culture media (38.9 percent), and disposable products and bag connectors (37.6 percent).

What’s more, the industry’s desire for sensor innovation continues to grow. That 45 percent metric is the highest figure we have seen as of yet, up from a high of 30 percent in the past three years.

Demand for sensors appears to be largely consistent across the Atlantic. U.S. respondents put disposable probes and sensors atop their list, while this area was second only to disposable bioreactors for Western Europeans. That growth crosses both sides of the Atlantic. The 50 percent of U.S. respondents interested in single-use sensor innovation represents a step up from the past couple of years, while the 47.4 percent of Western Europeans expressing a desire for innovation in this area represents an even bigger uptick from last year’s survey results.

Are Innovative Suppliers Ready to Respond?
With the increased demand for sensor innovation, vendors should be paying especially close attention to this area. To some extent, it appears they are.

When we separately interviewed a group of industry suppliers, we found that more than one in six are working on innovation in sensors and probes in some capacity. Although this was not a significant step up from last year, sensors and probes were in the top quintile of focus among the more than 50 new product development areas we tested with this group of suppliers. That’s an encouraging sign that vendors are recognizing end-users’ requests, though perhaps not quite to the extent that end users may desire.

Types of Sensors in Demand Are Changing
While simple sensors remain the most sought-after by end users, other types are growing in demand. In a separate section of our report, we examined the types of single-use sensors that the industry would like to see introduced or improved.

This year, pH and dissolved oxygen sensors remained at the top of the list, as they were last year. Of note, though, inline titer sensors moved into the third position, up from the fifth spot last year. Also skipping a couple of positions this year was cell viability technology, the fifth-most-requested sensor introduction or innovation.

It’s interesting to see that there are some somewhat contradictory results in our study, at least on the surface. For example, while demand for single-use sensor innovation is at its highest, our examination of specific single-use sensors found significantly dampened demand for many categories. That was the case for the following sensors:

The only sensors to see appreciably more demand this year were those noted above: in-line titer and cell viability.

Sensor Trends
Our study offers up two potential trends: increased overall demand for better sensors, and a reduced desire for more specific sensors. In combination, these results suggest that the industry recognizes the need for better sensors, but there is less consensus about which types are most in need.

Nevertheless, there’s no doubt that the broad demand for sensor innovation is likely to grow, particularly as sensors are needed for improved assay and analytical methods for process monitoring and control. Continued improvements in sensors, probes, and analytical equipment will indeed facilitate process quantification and process analytical technology (PAT). Thus, as bioprocessing becomes increasingly monitored by improved and new chemical, physical, and microbiological detection methods and assays — including single-use sensors/probes — the resulting data will be used for mathematical modeling and risk analysis. One comment provided by a study participant this year suggested that the lack of availability of reliable sensors capturing relevant data for process control is, in fact, hindering the adoption of PAT.

Clearly, the industry feels the time has come for the introduction of better sensors. 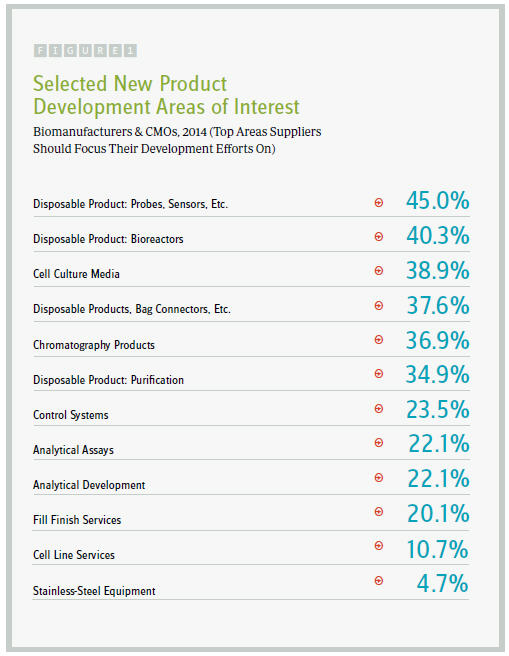 Survey Methodology: The 2014 Eleventh Annual Report and Survey of Biopharmaceutical Manufacturing Capacity and Production yields a composite view and trend analysis from 238 responsible individuals at biopharmaceutical manufacturers and contract manufacturing organizations (CMOs) in 31 countries. The methodology also included over 173 direct suppliers of materials, services, and equipment to this industry. This year’s study covers such issues as: new product needs, facility budget changes, current capacity, future capacity constraints, expansions, use of disposables, trends and budgets in disposables, trends in downstream purification, quality management and control, hiring issues, and employment. The quantitative trend analysis provides details and comparisons of production by biotherapeutic developers and CMOs. It also evaluates trends over time, and assesses differences in the world’s major markets in the U.S. and Europe.