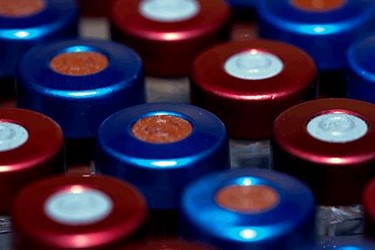 By Michael Turner and Magnus Franzen

In this series of articles, the biosimilar market has been carefully examined to help identify the ways in which it is on the brink of considerable and rapid change. The other articles delve further into the background of the biosimilar market, the different players operating in the space and the ways in which biosimilar companies are achieving differentiation and what it will take to establish market share. This final article aims to outline how biosimilars differ from generics and the commercial models biosimilar companies are using.

The Illusion Of A Generic Biologic

It was always anticipated that biosimilars would be priced at a smaller discount than that offered by the generics.  However, many companies entered the biosimilar arena thinking that the commercial model would resemble, to some degree, that of generic drugs.

Trial And Error: The Experiences Of Selling Biosimilars

Biosimilar commercialization shares several characteristics with originator biologics, more so than it does with generics. At the same time, the business model does not necessarily support large-scale commercial operations, which are commonly used for originator biologics while under patent exclusivity.

The approaches to biosimilar commercial set-up to date seem to fall in a continuum where the traditional, full biologic setup sits at one end, and the traditional, lean generics setup sits at the other end. However, companies have been forced to find new approaches when launching biosimilars, and some have gone through several iterations before finding the right position on that continuum.

As companies have evolved their commercial approaches to biosimilars, three factors have been identified that play a key role in shaping where their journey starts and how they may end up approaching their commercial setup, including:

The type of drug and therapy area

The appropriate commercial setup may depend on the type of drug and the therapeutic area in which the drug sits. For example, a majority of biosimilars currently in the market are erythropoietins (EPO), human growth hormones (HGH) or granulocyte colony-stimulating factor (G-CSF) – all of which are relatively non-complex molecules. Two biosimilars are anti-tumour necrosis factor (Anti-TNF) and monoclonal antibodies (mAb).

However, the biosimilars that are coming through the pipeline in the coming years are larger molecules targeting more complex therapeutic areas such as oncology. These are where biologic companies have for a long time moved towards a more ‘qualitative’ sales model, using up-skilled specialty representatives, Key Account Managers (KAMs) and Medical Science Liaisons (MSLs). Biosimilars will likely face similar challenges as originators do in getting in front of the doctor with the right customer-facing role, and will have to rely on other approaches to have both the sales and the scientific conversation. As a result, we have seen increased use of MSLs and KAMs by biosimilar companies rather than traditional sales reps.

The market in which the company wants to play

The second factor is the local market conditions. As with any drug launch, the way the healthcare systems are set up locally will play a key role in how to approach that particular market. This means we will likely see a myriad of different approaches emerging that are tailored to the different geographic markets. For more national tender-driven markets, biosimilar companies will rely more heavily on KAMs, institutional reps and government affairs support to sell their products. For other markets, where the physician still enjoys some degree of freedom over prescribing decisions, the focus will be more on building strong relationships with key opinion leaders (KOLs) and having scientific discussions with physicians via MSLs.

The history and experience of the company

Finally, as approaches have been evolving over the last few years, the origin of each company seems to play a role in where on the continuum between biologic and generics setup the company feels most comfortable. The archetype of each company also provides a framework for understanding how it may approach the commercial setup. By mapping the past evolution of a company against the framework of archetypes, it is possible to identify likely opportunities for further development of the commercial setup and better understand the choices and actions available to each company.

One example is Sandoz and its drug Zarxio, which was the third filgrastim biosimilar to be marketed in Australia, and where Sandoz applied a lean generics approach, using a minimal sales force and dropping the price way below that of the competitor.

The other filgrastim biosimilar competitors followed suit in terms of price, but as Hospira already had strong relationships with key stakeholders in the Australian market, Sandoz’s strategy had only moderate success.

The company then tried an approach on the other end of the continuum, following to the letter the biologic launch playbook. Although it worked slightly better, it was difficult for Sandoz to achieve sustainability. Finally, they had to scale back and use a more limited approach.

Hospira was in the same market, but they had a generics portfolio heavily dedicated to the hospital channel. Therefore, their commercial setup was more focused on account managers and institutional sales. In this particular market, it seems like Hospira’s focus – launching a biosimilar that complemented the rest of their portfolio – was directed to the same channel and used a commercial set up with which they were familiar. This allowed them to create lasting relationships with key stakeholders and, in extension, protect their market share as more biosimilar competitors entered the market.

Biogen, which recently entered the biosimilar space together with Samsung, offers a third example. Biogen has been building out their commercial structure with the launches of Flixabi and Benepali, as well as their imminent SB5, and they seem to be focusing their efforts on KAMs/access/regional institutional sales and MSLs.

The overview of functional job titles for Hospira, Biogen and Sandoz, across a range of global biosimilar markets, illustrates the focus of their commercial models (Figure 1). 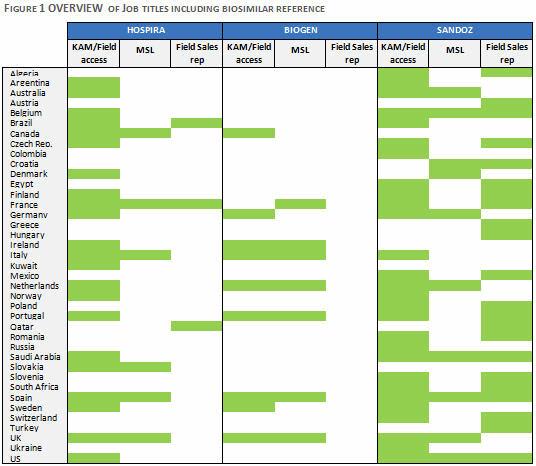 Companies are still exploring where the right approach lies on a continuum, ranging from a full-scale, commercial approach typical for biologics to a more traditional lean generics approach. Many companies have already gone through several iterations of their commercial approach, experimenting with different models. In some cases and in some markets, these iterations have taken place with the same drug in the same market.

The commercial approach for biosimilars is clearly evolving. As new players position themselves more forcefully in the market (like Amgen) -and new, more complex molecules make their way through the pipeline -we should expect further evolution.

However, there already seems to be a tendency to build commercial capability with account managers and field-based medical teams over traditional sales representatives. Although sales people were still identified by many executives as important to get pull-through with prescribers, the size of the field force needs to be appropriately adapted to the biosimilar market needs and opportunity.

To make the commercial structure compatible with the biosimilar business model and revenue potential, it may need to be much more focused than a traditional biologic setup. This focus should be both in terms of the market (i.e. full setup in core EU and US markets and limited setup in other markets) and over time (i.e. before and during launch).

What we do know is that as the path begins to clear, there will be significant opportunity for biosimilars to reach their full potential.

Michael Turner is a life sciences expert at PA Consulting Group, with over 17 years of commercial strategy experience. Michael partners with clients to address strategic product and portfolio challenges and implement strategies to maximize asset value.

Magnus Franzen is a life sciences expert at PA Consulting Group. With a background in strategic and market research, Magnus leverages a deep knowledge of the dynamics of commercializing pharmaceuticals in a changing healthcare environment to support clients in key strategic areas, such as customer engagement, multichannel marketing and value beyond the pill.