Biotech Budgets: Whose Departments Are Winning?

The biotech budget allocation winners during the next 12 months will be the departments driving improved manufacturing performance and productivity. As indicated by our 8th Annual Report and Survey of Biopharmaceutical Manufacturing Capacity and Production, April 2011, the top spending projections are going to internal investments into new technology (upstream and downstream) and personnel and process development and optimization.

Biopharmaceutical company budgets are clearly recovering from recent economic problems, as overall budgets increase in 2011, according to the study. However, companies are continuing to follow a conservative path and are maintaining their focus on cost reduction, performance improvements, and more careful evaluation of cost-savings efforts. In fact, according to our study (see Fig. 1), a major standout shift was in the focus on production quality. Here, we saw an 11% increase to 57.1%. In addition, some of the drastic budget cutbacks that occurred in 2010 in manufacturing process improvements were significantly scaled back.

This trend toward productivity, cost cutting, and quality focus may affect company budgets that are not linked to these factors and may not target rebuilding of in-house activities and staff that had been reduced or eliminated in recent years.

Bigger Budgets
Survey respondents consistently projected budget increases for 2011. This was a substantial change from previous years when budgets continued to show decreases in many or most areas. However, responses this year indicate companies are cautious, and new expenditures will be critically evaluated. Overall, with even more biological products on the market and more deals being made, financing is less restricted, and spending in virtually all budget areas is up in 2011, between 1% and 6%. This includes expansion of spending on new capital equipment and facilities — a significant reversal from the past three years.

Although every budget area surveyed is up this year, “New technologies to improve efficiencies/costs for downstream production” leads the pack with a 6.4% average spending increase. This year’s downstream budget increase comes on the heels of last year’s budget-leading 4+% increase. We expect this is a result of funding for activities that reduce capacity constraints due to bottlenecks from downstream operations.

For 2011, funding of new technology in upstream department budgets scores a close second to downstream. Integrating “New technologies to improve efficiencies/costs for upstream” puts the upstream department budget increase at a 6.2% increase (Fig. 2). This places it just 0.2% behind first-place downstream budgets and above its 2010 third-place position. Upstream manufacturing’s greatly increased yields in recent years keep it competitive from both productivity and performance standpoints.

In the study, we received responses from 352 global, biomanufacturers/CMOs in 31 countries and 175 vendors to the industry. Respondents provided key insights into trends in the biomanufacturing industry.

Capital Equipment On The Rise
Given the loosening of purse strings, we also find that new capital equipment expenditures now hold a strong third place in budget portion contention, just a few percentage points behind the top two. In fact, the budget for new capital equipment took one of the biggest jumps, moving up significantly from a budget decline in 2009. This is likely the result of latent demand of equipment wearing out, that should have been replaced earlier.

Human Resource departments show a reversal of 2009 and 2010 hiring budget cuts. Hiring for both new operations staff (ranked eighth) and new scientific staff (ranked ninth) both got a dramatic budget bump, as companies replace or fill needed spots to optimize productivity. Each went from a ~3% budget decrease to a ~3% budget increase. The basic R&D for new therapeutic products departments shows a similar reinvigoration. This is also an area targeted for new hiring support. New facility construction also grew on latent demand. 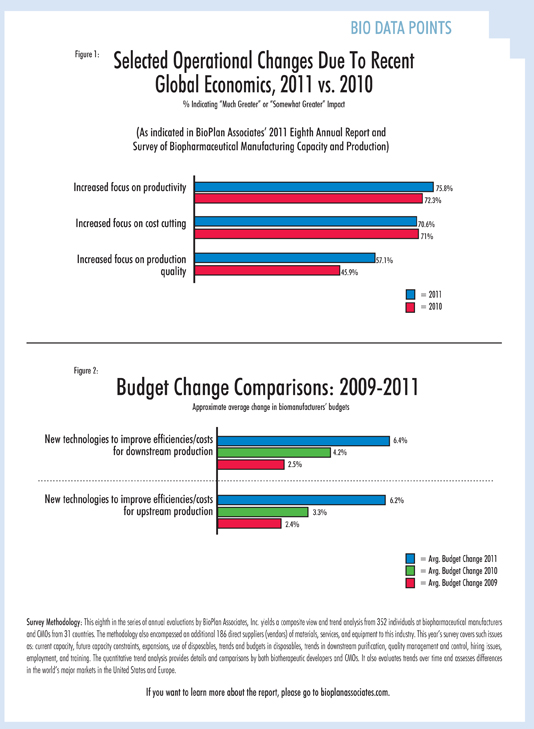