Biotechnology In The U.K.: Growing And Changing

The U.K. has a long and deep-rooted heritage in life sciences and medicine, and a history of breakthroughs from Alexander Fleming’s discovery of penicillin to Watson and Crick’s elucidation of DNA. Today the U.K.’s biotech sector is still growing despite the current economic climate. As an example, in 2012 the turnover of the U.K. medical biotech sector increased 5% to almost £4 billion ($6 billion), as Steve Bates, CEO of the BioIndustry Association (the U.K. biotech industry’s trade association), explained.

“The U.K. has an established pharma industry with a long history, which includes large and small companies, and a CRO sector that is growing in response to increased outsourcing and risk sharing in the pharmaceutical industry,” says Mark Treherne, CEO, Life Science Investment Organization (LSIO), a U.K. Trade and Industry (UKTI) initiative to promote investment in the U.K. life sciences industry.

Growing From Strength To Strength
Biotech and medical research in the U.K. has a global reputation. In a recent report in the British Medical Journal (BMJ), the U.K. is second only to the United States as a source of new drug development, generating more than 10% of all new therapeutics worldwide.

“The U.K. has a number of key strengths — it has a strong and supported ecosystem, well-established strengths in science, a good clinical community, and entrepreneurial people. We are well-connected globally,” says Bates.

A number of subsectors are performing well in the U.K. life sciences; for example, the specialty pharma companies and the medtech sector. Also on the up is the relatively new field of cell therapy.

“Specialty pharma companies are often small and low-profile, but they are growing and building sustainable value through development and marketing. The U.K. also has a growing medtech sector, particularly in combination therapies and companion diagnostics, together with pharma services,” says Steven Powell, CEO, Virttu Biologics, a clinical stage U.K. biotech company pioneering the development of viruses to treat cancer.

One of the strategically important, though still relatively young, subsectors in the U.K. is that of stem cell science, including cell therapy and regenerative medicine, explains Michael Hunt, CEO, ReNeuron, a clinical-stage stem cell company. “The U.K. has always been one of the forerunners in cell therapy, but now more emphasis is being put on translation, moving projects into the clinic and beyond. However, regenerative medicine lacks a credible investor base in the U.K. — it’s novel, which can scare investors off.”

The Cell Therapy Catapult, a Londonbased technology center, has been created to help very early-stage companies in this field. Its aim is to provide access to finance and expertise, and help to move products into clinical trials. Programs like this will help to build confidence and reduce risk in new areas.

Driven From Above: National Support For U.K. Biotech
The U.K. government is behind biotech, and in December 2011, it launched the Strategy for U.K. Life Sciences, which made a commitment to improving the translation of scientific invention and innovation into products and services. The government’s commitments include tax relief programs to support both large and small companies, such as the “Patent Box” (see “Innovation In The U.K. Biopharma Industry,” Life Science Leader March 2010), and R&D tax credits.

Proposed by the U.K. Chancellor in March 2009, the Patent Box cuts corporate tax on income from patents originating in the U.K. for both U.K. and non-U.K. companies. It comes into effect in April of 2013. Companies carrying out research in the U.K. also qualify for R&D tax credits at a rate of 130% of qualifying expenses for large companies and 200% of qualifying expenses for small companies. This “superdeduction” effectively reduces companies’ taxable profits.

From April 2013, large companies will have the option to claim “above-the-line” R&D tax credits instead, which are applied to the company’s profit–and-loss account rather than its taxable income. 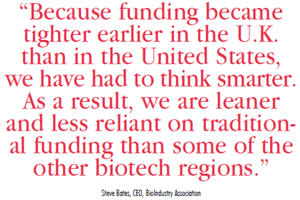 Support from the U.K. government also includes funding streams. The Medical Research Council and the Technology Strategy Board (the U.K.’s innovations agency) run the £180 million Biomedical Catalyst, which provides funding for life sciences’ small and medium enterprises (SMEs) in the U.K., supporting opportunities with both scientific and commercial potential. This support has the potential to bridge the funding gap for early-stage research, as well as encourage academia and industry to work together. The National Health Service’s (NHS) National Institute for Health Research provides research awards for collaborations between U.K. healthcare academics, clinicians, and industry that focus on developing patient-focused innovative medical technologies.

The headquarters of Powell’s company, Virttu, are in Glasgow, Scotland, and it has historically received support from regional funding. As Powell explains, “There is a significant level of regional support for Scottish companies, helping with growth, development, and infrastructure.”

The Changing Financial Climate: Finding Further Funding
Like all economies around the world, the U.K.’s has been hit by the financial downturn. The dearth of traditional VC funding for earlystage companies has led to a need for alternative forms of funding, in addition to that provided by the U.K. Government.

“The U.K. biotech sector has moved on since the boom of the early 1990s. We now have a better understanding of risks and opportunities. The nature of funding and collaborations has also changed, with less traditional funders becoming more important,” says Bates. Alternative sources of venture capital include Big Pharma companies, universities, and charitable trusts. For example, SR One, GlaxoSmithKline’s independent corporate healthcare venture capital fund, has invested over $680 million in biotech since 1985. Rock Spring Ventures EU’s backers include Glasgow, Edinburgh, and Aberdeen universities, and it focuses on supporting early- stage life science and technology companies. Syncona Partners, which launched in January 2013 and is wholly owned by the Wellcome Trust, has been created to help both early- and late-stage companies. Its first deal was for seed funding for Cambridge EpiGenetix, an early-stage epigenetics spinout from Cambridge University.

Early-stage companies are also increasingly being supported by private investor syndicates and corporate investors, rather than by venture capital companies with life sciences experience. This has broadened the scope for available funding, but means that it is increasingly important to demonstrate the value of the sector in terms of both business potential and impact on society.

The BIA is calling for the introduction of Citizen’s Innovation Funds, a form of crowdfunding (see “Crowdfunding In Life Sciences: A New Route To Finance,” Life Science Leader December 2012) that allows private individuals to invest small amounts in biotech research and innovation. This mode of funding has been very successful in France, where the Fonds Communs de Placements dans l’Innovation (FCPI) has raised more than € 6.5 billion since 1997, supporting over 1,000 companies.

Financing remains a challenge for many in the U.K. biotech sector, according to Powell, who says that it’s not always clear why some are getting access to money and others are not. However, clouds can have silver linings, and these challenges may prove to be beneficial to the industry, as Bates explains: “Because funding became tighter earlier in the U.K. than in the United States, we have had to think smarter. As a result, we are leaner and less reliant on traditional funding than some of the other biotech regions. I believe that this shows the business model is now adapting to the science and the economic climate.”

Potential For Growth
Although the U.K. biotech industry is moving forward, there is still room for further growth. “We are good at creating small biotech companies. However, these then tend to license out their technologies or go to a merger or trade sale before the full value of the pipeline is realized, and the money goes elsewhere,” says Hunt. “Holding onto the assets for longer would retain more value in the U.K., but these companies need more investment, as well as investors that don’t look to exit early. I’m not sure whether this is a financial or a cultural issue, or just a result of the size of the economy. It’s not wrong; it just doesn’t sustain a broader industry.”

The U.K. can learn from other biotech regions, according to Treherne: “The U.S. biotech sector is good at building medium-tier companies, which may be because they have investors that are more willing to back high-risk endeavors.”

Powell sums up the status of the industry in positive terms but with a word of advice relevant to all life science companies worldwide: “The building blocks are in place for a successful biotech sector, and there are definitely some exciting things happening at the university level across the U.K. The U.K. has also increased its skills base in clinical development with translational medicine being one of the new key themes. However, the financial media still tend to focus on the negative, for example, on drug development companies where there continues to be a high attrition rate in clinical development. We need to promote the success stories and emphasize why the life sciences are important.”