Breaking The Mold — A New Perspective On Alzheimer's

Casey Lynch, CEO and cofounder of San Francisco-based Cortexyme, has been fascinated by Alzheimer’s disease throughout her career, even dating back to her graduate work at UCSF. And while other biotech and pharmaceutical companies have been needling away at the problem (without much success) for more than two decades, largely by looking to beta amyloid and tau proteins as the culprit, Lynch has long had the gut feeling that there was something else going on behind the scenes. As it turns out, she was right — looking at years of research, mounting evidence shows that a bacterial infection in the brain is at the root of Alzheimer’s disease.

Simultaneously, UCSF psychiatrist Dr. Stephen Dominy was working with patients with HIV and dementia, and was therefore especially interested in infectious causes of neurological disease. Dominy’s research led him to discover a pathogenic bacterium in the brain of patients; Lynch and Dominy met each other through investment group Life Science Angels, and the seed for Cortexyme was planted. Cortexyme can now identify the bacteria (which one, Lynch says, is still confidential) in the cerebrospinal fluid of people with Alzheimer’s.

Cortexyme, which operates in lab space at JLABS, a nonprofit run by Johnson & Johnson, has now proven this correlation between the bacteria and the disease in the brains of mice as well as aged dogs. The company began Phase 1 human studies in December 2017.

LESSONS IN INVESTING
In the past four years since that first seed was planted, Cortexyme has raised more than $24 million in capital, with Pfizer and Takeda Ventures as backers — an achievement Lynch attributes to good timing, good data, and finding the right “champions.”

As exciting as the discovery was, Lynch and Dominy knew they needed more to go on. For the first year, they operated on what she calls “friends and family money,” doing their own experiments to corroborate what they had found in the data. This process was a lot like making a low-budget film — they sought out a scientist who was an expert in the bacteria they were studying and asked him to donate the leftovers from his own experiments — the brains of mice he had that were going to be thrown away. Lynch knew from previous experience that it was important to have something solid to present to investors. “We needed more than really interesting correlative human data, which is what we started with,” she says. “There’s a certain bar you need to reach before you go to venture or corporate folks.”

Once the fledgling company had proven causation in mice, there still wasn’t a lot to share with investors without a molecule to invest in. They surmounted this obstacle by seeking a grant from Breakout Labs (part of philanthropic organization the Thiel Foundation), which provides grants for early-stage scientific research. With that funding, Cortexyme had enough momentum to develop a proprietary drug program needed to convince corporate and VC investors to take notice.

Lynch’s advice for startup biotechs seeking capital is to put themselves in investors’ shoes. “Once you’re in the pitching stage, it’s important to show investors that you have a clear vision — from A to B to C to exit,” she says. “This isn’t a science project. Sometimes it isn’t even about making revenue, although usually making revenue leads to an exit; you need to make it clear to investors that you understand their business as well as your own. Their business is giving a return to their company or their limited partners.”

Even with strong data and a clear understanding of investors’ goals, Lynch says, you’re not likely to succeed without a personal connection. Finding a “champion” within the company you’re courting is crucial; Lynch says to look for someone within the organization “who will really dig into your opportunity and get to know you.”

GENDER DIVERSITY IN BIOTECH
In addition to looking at a new underlying cause for Alzheimer’s and having an investment strategy that depends on human connection, Cortexyme stands out in yet another way; 50 percent of its staff, including the executive team, are female. Lynch doesn’t think this is newsworthy, despite a September 2017 report from Liftstream and The Massachusetts Biotechnology Council that shows the C-suite of biotech is made up of 24 percent women versus 76 percent men. She insists the 50/50 split at Cortexyme was not intentional, but rather is “just what happens when you hire the best person for the job.” She also believes the successful, collaborative dynamic at Cortexyme is not a result of having more women at the table. “My cofounder is incredibly empathetic; he’s a great leader and a great motivator. And some women on our team are very assertive. I don’t think any gender has a corner on certain qualities that are good for a company,” she says. 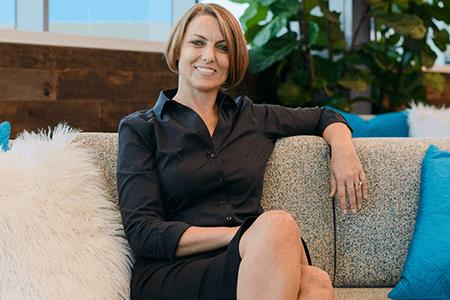 "You need to make it clear to investors that you understand their business as well as your own. Their business is giving a return to their company or their limited partners."

That’s not to say that Lynch is blind to the impact that a lack of gender diversity in life sciences has on the industry as a whole. She acknowledges that biotech conferences and meetings where life science executives gather are often very one-sided. “I think the way it impacts the industry is that when there are fewer examples of successful women leaders, investors have fewer experiences to draw from,” Lynch reflects. “And if they’re thinking that they’ve never had an experience with a female founder or CEO who has been successful, this can create an unconscious cognitive bias as to who they invest in.”

Despite the daunting odds, Lynch doesn’t look for any credit or consider herself a hero or overachiever for her rare position among that 7 percent of female biotech CEOs. “I think all entrepreneurs have to push hard. It requires a lot of grit and passion and perseverance,” she says. “Did I as a woman have to have more of that? I couldn’t say. I don’t know.”

BREAKING THE CURSE
Hundreds of biotech and pharmaceutical companies have tried to find the needle in the Alzheimer’s haystack over the years — the one therapy that would succeed in clinical trials, that could do more than just treat symptoms for a short period, that might actually find and treat the underlying cause. And while popular medications such as Pfizer’s Aricept (donepezil) can give patients a small cognitive boost for a few months, research focusing on beta amyloid and tau proteins hasn’t hit the mark in terms of curing disease — so far, every one has failed in the clinic. According to a 2014 study published in Alzheimer’s Research and Therapy, “Alzheimer’s disease drug-development pipeline: few candidates, frequent failures,” of the 413 Alzheimer’s trials that were registered to clinicaltrials.gov between 2002 and 2012, 99.6 percent failed. During the assessed time period, 72 percent of agents failed in Phase 1, 92 percent failed in Phase 2, and 98 percent failed in Phase 3. As of the publication of that study, only five drugs were approved for Alzheimer’s treatment, and no new treatments have been approved since 2003.

With odds like these, what keeps Lynch and her team getting out of bed and coming to work every day? “It’s easy because we’re doing something so different,” she explains. “I’m not sure how it happened, but in all of pharma, the targets in Alzheimer’s disease were narrowed down very early on to one or two, maybe three. Compare that to oncology, where researchers pursue so many different targets — that just increases the chances of success.” Lynch is not disheartened because she believes that “the lack of efficacy to date is likely because only small pieces of the puzzle are being addressed.”

Lynch’s optimistic mindset permeates the team at Cortexyme. She recalls a moment where she checked in with a new scientist about three months after bringing him on board, when he said to her, “I get up every day, and I’m excited to come to work because I know we could discover something new today.” This turned out to be more than just a platitude; this same scientist later created the current diagnostic method Cortexyme uses to identify the bacteria in the cerebrospinal fluid — quite possibly the first step toward an unprecedented breakthrough for Alzheimer’s patients.

Click here to see a video of Lynch titled "Is it possible that microbes cause Alzheimer’s?"