Austin, TX, prides itself on being called the Live Music Capital of the World. In recent years, it has also been aspiring to live up to the title of Silicon Hills. When it comes to high-tech, the name fits. Its high-tech industry is anchored by the likes of Dell, IBM, and AMD. In recent years, a growing number of high-tech startups and satellite offices of Silicon Valley favorites — such as Apple, Google, and Facebook — have also come to call Austin home.

Now, there is a serious push to make Texas the “Third Coast” of biotech and Austin, in particular, a new hub for the industry. “It took the Boston/Cambridge area 40 years of focused community building and economic redevelopment to become the biotech hub it is today, and that’s what it’s going to take for us,” says Cindy WalkerPeach, Ph.D., director of health/biosciences at the Austin Technology Incubator (ATI). “Austin and Central Texas are probably 20 years into that process.”

ATI is the startup incubator at the University of Texas at Austin. It helps companies that were started oncampus and in the larger community get funding. It accepts about 8 percent of its 250 applicants annually. WalkerPeach leads the bioscience effort — pharmaceutical, medical device, diagnostics — for the incubator’s portfolio. In 2016, six out of the 19 companies that graduated from the incubator operate in the biotech sector – the highest proportion of biotech in the incubator’s history. According to the Austin Chamber of Commerce, there are about 230 life sciences companies in Austin, including large healthcare providers. Most, however, have a dozen or fewer employees. The chamber says that about 16 percent, or roughly 37 companies, are focused on developing a pharmaceutical.

WHAT AUSTIN HAS TO OFFER
Austin is like a chemical solution just waiting for a catalyst to transform it from startup central to a hub for the biotech industry. John Burns, president of BioAustin, the life sciences industry organization for Central Texas, says, “All the ingredients are there.”

WHAT’S STILL NEEDED
With all of that going for it, there are still some key ingredients needed for Austin to fulfill its potential as a biotech or bipharma hub. At the top of that list is a large, successful company — either a homegrown success story or a company that relocates to the area. “There’s an awful lot of opportunity here,” Burns says. “We’re just waiting for someone to make it big — and stay.”

Ambion is Austin’s most famous biotech success story. The maker of RNA (ribonucleic acid)-based consumables was acquired by Applied Biosystems (ABI) in 2005. ABI then merged with Invitrogen to form Life Technologies. That company is now part of Thermo Fisher Scientific. About 200 Ambion employees remain in Austin, while much of the manufacturing has been moved to Lithuania.

All of what makes Austin great for biotech makes it great for the pharmaceutical industry, says Greg Stein, M.D., founder and CEO of Curtana Pharmaceuticals, a graduate of ATI. Stein is intimately familiar with hubs, having started a company in San Diego, as well as having studied how high-tech centers develop. The former physician coauthored a 2007 peer-reviewed paper on the topic. He says that if a biopharma company does find success in Austin, it is likely to go the way of Ambion or be relocated to one of the coasts.

Stein started Curtana with Santosh Kesari, M.D., Ph.D., a University of California, San Diego professor of neurology who identified a potential drug target for the treatment of a type of brain cancer called glioblastoma. The target is a transcription factor that turns on the genes responsible for the initiation and growth of cancer stem cells in the brain. These genes are critical to a developing brain, but lead to tumor growth in adults. The treatment has shown promise, and clinical trials are expected to begin in late 2017.

After receiving a $7.6 million CPRIT grant in 2014, Stein moved the company to Texas. “We wanted to pick a place where we knew our employees would enjoy living.” He agrees with the list of pros given by Burns and others hoping to encourage biopharma growth in Austin. Stein also agrees that the new Dell Medical School and its progressive dean, Clay Johnston, could be just the catalyst Austin needs to put itself on the biopharma map. “Clay is going to attract a lot of ‘rock stars.’” 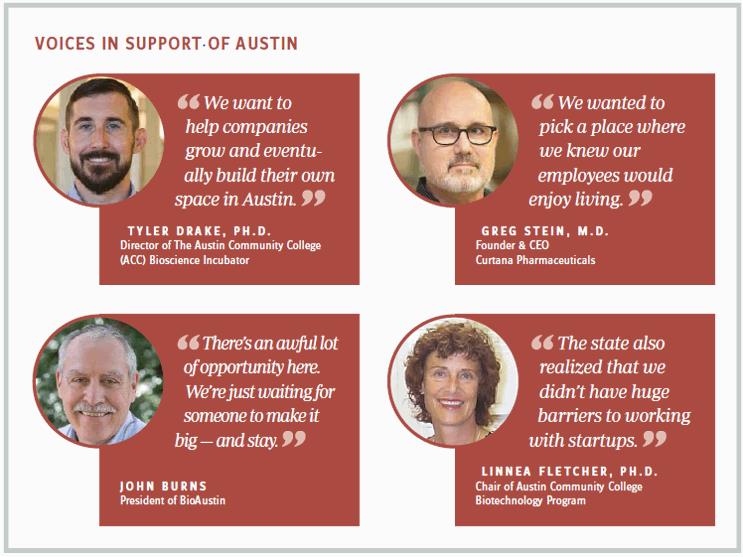 Stein says Austin is a great birthing ground for companies like his. But it lacks other key components, in addition to a large anchor company or two, that are keeping it from becoming a true biotech/biopharma hub. These include affordable wet-lab space, more highly skilled workers, and a larger community of toplevel executives.

Austin will have all of this and more, Burns says. “Just give it time.” The highly skilled workforce and biopharma community in Austin are growing, especially as more local companies lure workers looking for affordable housing, better commute times, and good schools from established biotech hubs on the coasts.

Now that Dell Medical School is coming on-line, WalkerPeach agrees with Stein and Burns that the next item on the biotech hub “wish list” would be the presence of a large pharmaceutical company to anchor ecosystem development and expansion. WalkerPeach points out that Austin already has a number of established public and private medical device and diagnostics companies. It also has quite a few small, private biopharma companies. “We have had some nice M&A and IPO activity in the last several years.” Still, she says, “Austin’s biotech ecosystem could benefit from the added plasticity and venture development that a toptier pharma company would add to the mix.”

THE BIRTH OF AN UNUSUAL WET LAB
Affordable wet-lab space, it turns out, is the biggest factor limiting the growth of Austin-based biotech/biopharma. A grass-roots effort has led to the state’s first wet lab built in the most unexpected of places: a former shopping mall. The Austin Community College (ACC) Bioscience Incubator officially opened its doors in January 2017. The lab, which is accepting applications from startups, is funded by a $4.9 million grant to address the critical shortage of research space in the region.

“Austin has historically lacked this type of space,” says Tyler Drake, Ph.D., the incubator’s director. The flexible space will be a great launch point for companies, as well as providing hands-on training and internship opportunities for the school’s biotechnology majors. The incubator will also provide companies with business support. “We want to help companies grow and eventually build their own space in Austin,” Drake says.

Getting companies started — as well as staying — in Austin has been Linnea Fletcher’s goal for 20 years. “When I came to Austin, I found people were moving out because they couldn’t find jobs in the life sciences.” Fletcher, who has a Ph.D. in microbiology, chairs ACC’s biotechnology program, and heads up the AC2 Institute, funded by a Wagner Peyser Grant that allows the program to connect with industry, other education institutions, and government.

Fletcher, who previously worked at the National Science Foundation reviewing grants for undergraduate education, spent two years securing the grant for the current wet-lab incubator. “The idea of a community college having a wet-lab incubator was a bit foreign to the governor’s office.” ACC is the first twoyear college to apply for and be awarded funding from the Texas Emerging Technology Fund Research Award Matching program. Partners include ATI, the nearby city of Georgetown, and the Texas Life Sciences Collaboration Center.

Fletcher was able to convince the state that the incubator would be successful, in part, because she and students from her biotechnology program had already been working with industry at ACC’s Round Rock campus. “The state also realized that we didn’t have huge barriers to working with startups. We don’t talk about intellectual property rights, for example. Our driving force is combining economic development with best practices in education.”

Austin is just as good a place as any for an innovation hub to thrive, Fletcher says. “I’ve always supported the underdog and the idea that innovation can come from anywhere. That’s why I push to make it happen right here in Central Texas.”