As 2013 draws to a close, the biopharma industry is looking harder than ever to reduce the sometimes exorbitant cost of manufacturing a biologic. So, using data from our 10th Annual Report and Survey of Biopharmaceutical Manufacturers, we’ll discuss some of the most critical innovations in biomanufacturing and how those innovations will affect the industry in the future.

1. Single-Use Innovation Will Continue To Excite Interest
Much of the demand for innovation continues to center on single-use equipment. Biomanufacturers and CMOs continue to define an extensive list of areas in which they want their suppliers to focus development efforts. In the current study, and in other research, the industry has clearly indicated it needs new and better disposable products. Disposable bags and connectors top the list (44 percent of end users), followed by disposable probes and sensors (40 percent), disposable bioreactors (34 percent), and disposable purification products (34 percent). We expect these rankings will remain consistent in 2014. While stainless-steel equipment remains the dominant paradigm for commercial manufacture, only 5 percent of respondents expressed an interest in innovation in this mature area, putting it at the bottom of the list.

2. Better Assays: Vendors Need To Focus On R&D
While vendors may be listening when it comes to disposables innovation, end users hoping for better assays might be disappointed. In recent years, we’ve noted a significant increase in the need for improved assays in a variety of areas. The assay areas most urgently in need of new or improved testing methods, according to respondents of our latest study, include aggregation, bio-assays to assess potency for release of drugs, and biotech drug comparability (for in-house manufacturing changes as well as biosimilars).

But when we asked about which areas were the focus of new product research, it turns out that few respondents were working to fix assay methods or probes. In fact, only around 1 in 10 vendors — in some cases even fewer — is working on testing or assay products. These products ranged from simple probes and sensors to complex raw materials testing (11 percent), to biosimilarity testing (9 percent) and glycosylation analysis (8 percent). As for disposable sensors, the most critical need for innovation pertains to pH sensors, with nearly three-fourths of respondents saying they would like to see improvements in this area. In 2014, vendors will likely heed the call and commit to developing better sensors and probes, although perhaps not to the higher level seen with disposable bags, consumables, and films.

3. Connecting And Integrating Systems In Demand
It’s clear from our study that many respondents expect a fully disposable facility to be operational within the next five years. Before that bold vision is realized, the industry will have some very small devices to thank for the ability to use single-use equipment in an integrated fashion — connectors. Disposable connectors, which can link and integrate devices from the same or different vendors, offer great flexibility. These are in demand at the moment both in the U.S. and the EU, and by CMOs and biopharma manufacturers alike. And the rate of interest in innovation in this area has been steadily rising for a couple of years. There’s reason to believe vendors respond to this need, and improvements will continue through 2014.

4. Chromatography Alternatives? Not Quite Yet
The slow pace of innovation in assay development is affecting broad areas of the industry. But the problem facing a large percentage of end users is the chronic pain and costs associated with chromatography. End users recognize that current methods work very well (despite the current high costs and purification bottlenecks). Therefore, they may not be pressing for advances as aggressively as in other areas. Some alternative purification technologies are being developed, but few facilities are actually following through on their intentions to switch to protein A alternatives. In fact, intent to switch appears to be waning — and has been for a few years now. Only 1 in 10 respondents said they’re seriously considering alternatives for existing production units. That’s the lowest figure in several years.

We continue to see a steady proportion of respondents stating that they expect to move away from Protein A over the next 12 months. But in this case, action doesn’t always seem to follow intent. For example, despite about one-fourth of respondents saying they’d investigated alternatives to Protein A during the past year to improve downstream purification operations, only about five percent said they actually made a switch. In other words, of the respondents who were considering alternatives last year, only about 20 percent followed through.

5. High-Capacity Resins And Other Downstream Processing Innovations
Facilities may be lukewarm in their pursuit of alternatives to protein A, but that attitude doesn’t apply to all downstream technologies. In addition to interest in other high-capacity resins (showing a 10 percent point jump since 2010), decision makers are considering better single-use filters, an area that is also growing rapidly (e.g. from 29 percent in 2010 to 44 percent this year). Interestingly, when it comes to downstream purification, single-use disposable TFF (tangential flow filtration) membranes might be a new technology to keep an eye out for. As mentioned in previous columns, we see CMOs as the catalysts for industrywide adoption of innovative technologies, and they seem particularly drawn to disposable TFF membranes this year.

Factors Creating Demand for Innovation
Almost a year ago, we asked the more than 450 global subject matter experts and senior biopharma participants who make up our Biotechnology Industry Council to identify the macro trends in the industry, along with their vision for the future. Here are some of the areas they expect will be driving the “innovation dialog”:

We are excited to follow where these developments will bring us in 2014. 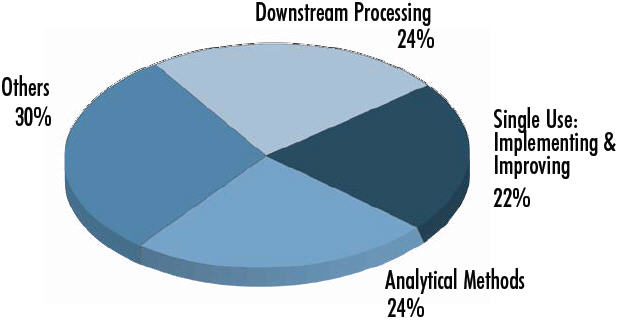 Survey Methodology: The BioPlan annual survey of biopharmaceutical manufacturers yields a composite view and trend analysis from over 300 responsible individuals at biopharmaceutical manufacturers and CMOs in 29 countries. The methodology included over 150 direct suppliers of materials, services, and equipment to this industry. This year’s study covers such issues as new product needs, facility budget changes, current capacity, future capacity constraints, expansions, use of disposables, budgets in disposables, trends in downstream purification, quality management and control, hiring issues, and employment. The quantitative trend analysis provides details and comparisons of production by biotherapeutic developers and CMOs. It also evaluates trends over time and assesses differences in the world’s major markets in the U.S. and Europe.