There is scientific and policy consensus that the only way the country (and indeed the world) can safely emerge from the health and economic ravages the COVID-19 virus has inflicted is the production and dissemination of effective vaccines and treatments. Government should be collaborating closely with industry to promote innovation that will save lives, improve health, and bring back prosperity that can come with safely reopening the economy.

Yet, in the midst of this crisis, it is astonishing that House Democrats have chosen the opposite path. On June 29, the House of Representatives passed legislation on a party-line vote that would cap pharmaceutical prices in both government programs and commercial plans based on an arbitrary foreign price index. The bill would then task the secretary of Health and Human Services to “negotiate” with pharmaceutical manufacturers for still steeper discounts beneath that foreign reference price ceiling for at least 50 products. Companies refusing to enter into agreements would be subject to confiscatory excise taxes of up to 95 percent of sales.

If the proposal sounds familiar, that is because it is identical to the provision that the House passed in December — before the COVID crisis wreaked havoc across the world and resulted in the worst economic collapse since the Great Depression. It is as if the House Democratic leadership does not realize that the very industry it vilifies for political gain is the same one that has the solitary ability to deliver the country from its public health and economic morass.

The bill voted on by the House of Representatives in June, dubbed “The State Healthcare Premium Reduction Act” (H.R. 1425), extracts $604.6 billion from the pharmaceutical industry (according to the Congressional Budget Office) to fund improvements to the Affordable Care Act. December’s bill would use pharmaceutical savings to fund Medicare coverage of new hearing and vision benefits.

Before passage of H.R. 1425, Democrats beat back Energy and Commerce Committee ranking member Greg Walden’s (R-OR) amendment to “Prevent the bill from taking effect unless the secretary of Health and Human Services certified that no provision of the bill would adversely affect research related to any drug intended to treat or prevent the virus that causes COVID-19.”

So much for trying to defeat the virus! Only nine Democrats joined a unified House Republican caucus in supporting that amendment.

Some analysts point out that these are free votes for Democrats because the Republican-controlled Senate will not take up such partisan legislation. Yet each time members of Congress vote for legislation that would radically transform (and diminish) the pharmaceutical industry, the more entrenched they become on these positions. If Democrats sweep the Senate and White House in November, how can members of Congress explain why they oppose a policy they have voted for twice before just because it is now likely to become law?

They cannot. And that is why these proposals that are unlikely to become law this year should still be taken very seriously: They can advance next year if there are different circumstances.

In the same week, the House decided to make the pharmaceutical industry the sole offset to a bill expanding insurance and Medicaid coverage; it approved a $1.5 trillion infrastructure and transportation bill that was not financed. That bill tripled in size between committee consideration and floor action, meaning House leadership added $1 trillion of new spending with no input from members with expertise on the issues. Gasoline prices are near an all-time, inflation adjusted low, yet gasoline excise taxes can’t be used to fund new roads and bridges? 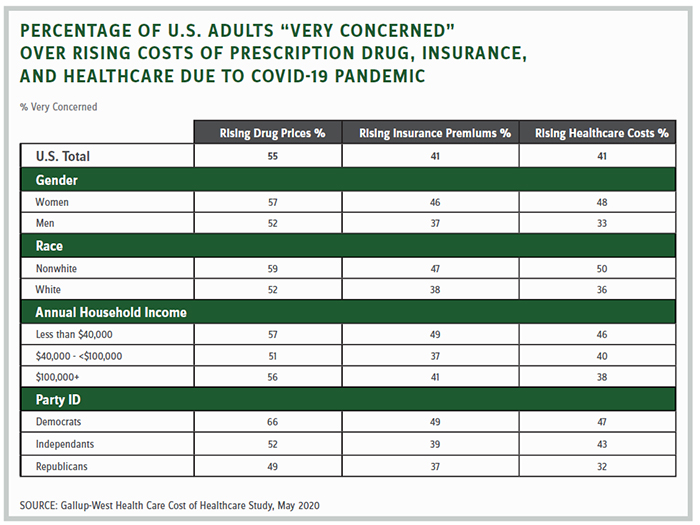 The only logical way to interpret this inconsistency of enormously expensive legislation that is financed versus bills that are not is the Democratic leadership’s fixation on vilifying the pharmaceutical industry for political gain. Preying on the public’s fear of potential pharmaceutical profiteering appears to have a political payoff. A recent study commissioned by West Health found that nearly nine of 10 surveyed are “very” (55 percent) or “somewhat” (33 percent) concerned that the pharmaceutical industry will leverage the COVID-19 pandemic to raise drug costs.

But that survey is belied by facts of manufacturers’ actual pricing decisions. Gilead Sciences surprised analysts when it announced a price of $3,120 for a five-day course of treatment of remdesivir, its promising therapeutic that has reduced hospital stays for COVID patients. The Institute for Cost and Economic Research stated, “Gilead’s pricing decision demonstrates restraint and a promising precedent for future drug pricing during the pandemic.”

That did not stop the AARP from issuing a scathing press release declaring, “It is outrageous but not surprising even during a pandemic, a drug company would price-gouge Americans. U.S taxpayers helped fund remdesivir’s research and development to the tune of nearly  $100 million, and now Gilead wants Americans to pay prices at least a third higher than the rest of the world ‘because that’s how the U.S. system works.’”

Such shrill statements by powerful interest groups propel short-sighted legislation of the sort the House has now passed twice in six months. What lasting damage it may have on the industry’s ability to attract capital and make the long-term investments on risky endeavors for unmet medical needs is difficult to predict. But it certainly will not enhance the pharmaceutical industry’s chances of defeating the COVID crisis in the same way it vanquished polio and AIDS.

The California Life Science Association estimates that if the price control provisions contained in HR 3 and HR 1425 became law, the number of drugs brought to market by small and emerging companies will decrease by 88 percent in California alone due to changed investor behavior.

The country’s No. 1 priority should be defeating this dreaded virus. Populist rhetoric and policies may poll well. But when they undermine serious efforts to develop the innovation to pull the country through this crisis, they must be abandoned for more thoughtful approaches.

John McManus is president and founder of The McManus Group, a consulting firm specializing in strategic policy and political counsel and advocacy for healthcare clients with issues before Congress and the administration. Prior to founding his firm, McManus served Chairman Bill Thomas as the staff director of the Ways and Means Health Subcommittee, where he led the policy development, negotiations, and drafting of the Medicare Prescription Drug, Improvement, and Modernization Act of 2003. Before working for Chairman Thomas, McManus worked for Eli Lilly & Company as a senior associate and for the Maryland House of Delegates as a research analyst. He earned his Master of Public Policy from Duke University and Bachelor of Arts from Washington and Lee University.