Enhancing Your Ability To Innovate: An Pharma M&A Playbook

Blockbusters are dead? Not so fast. Bigger no longer is better? A definite maybe. Despite the fact that industry pundits have declared this to be a new day, the current reality seems to be that the more things change, the more they stay the same. This is not cynicism but rather an acknowledgment that the industry’s (re)commitment to building drug pipelines, being more patient-centric and focusing on costeffectiveness, is absolutely necessary, but insufficient to remove the stigma of “value play” from analysts’ characterizations of many life sciences stocks. What that means is that historically successful strategies such as M&A deals are still on the docket. But before we dust off the old playbook, let’s think about some revisions to make sure it’s in sync with the new normal. 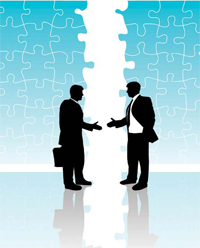 Our research has shown that only 9% of M&A deals fully achieve their objectives and that about 75% of business value from M&As can be linked to human capitalrelated intangible assets. In fact, 58% of companies in our research confess that overemphasizing systems integration resulted in insufficient focus on intangibles and cultural integration, while two-thirds believe an increased focus on these intangibles would improve merger success. Why is this important, and what steps can you take to ensure that the inevitable M&A activities are as successful as possible?

4 Strategies For M&A Success
First and foremost, it is crucial to understand that, when done poorly, an M&A can actually undermine a firm’s ability for future innovation by disrupting important networks, reconfiguring key project teams, and reorganizing key functions. In a Hay Group study of more than 800 R&D professionals in Big Pharma, 56% of scientists described their working environment as “demotivating” and another 15% as only “tolerable.” These scores are worse than any other function in Big Pharma. In fact, Big Pharma R&D’s working environment — what we call organizational climate — is lower than the R&D functions of any sector in our database.

We believe it is critical to change how life sciences companies conduct organizational transformations such as M&As in order to preserve their ability to innovate. We believe that adding the following four strategies to your M&A playbook will make the deal more successful while preserving or enhancing your firm’s ability to innovate.

1. Evaluate human capital up front. Leaders must analyze their own ability to collaborate and put a value on their target’s innovative capabilities during due diligence. They must understand the networks and matrices in their organizations — the very relationships that spur innovation — to determine what must be protected and what can be done away with. Cross-functional relationships are crucial, yet most change and M&A activity is conducted in silos — with (predictably) disappointing results.

For example, both Roche and Sanofi have recently acquired large, innovative biopharmaceutical companies. Instead of leaving them as stand-alones or fully integrating them into their existing structures, these companies took the time to understand both Genentech and Genzyme before taking action. As a result, Roche and Sanofi have both decided to leave the core of their newly acquired R&D-driven companies intact and instead to wrap their own R&D organizations around this new innovative core. In Roche’s case, it is moving its R&D hub to San Francisco where Genentech was based, and Sanofi is building an important R&D hub in Boston where Genzyme is based.

2. Clear roles are essential. When mergers, acquisitions, and organizational transformations occur, people’s jobs change: some get bigger, some get smaller, some change function. In times of change, people need, above all else, clarity about their role and an understanding of what excellence looks like. Leaders must manage these changes with confidence. All else can be in chaos, but if people know what is expected of them, success is far more likely.

In several recent client engagements related to M&A and organizational transformation, the Hay Group has worked with clients to go beyond structure, to dig into the detail of job designs to ensure they are aligned with the new organization and operating model. In one recent case where an acquired biopharmaceutical facility was being integrated by a European company, we worked with the parent company to understand its strategies and operating model for its global biopharmaceutical business. We then partnered with the facility to recraft all of the leadership and management job descriptions to ensure that capability requirements, accountabilities, and decision rights were aligned with the new model.

3. Focus on decision-making and governance. If leaders are not paying attention to relationships and role clarity, the quality and speed of their organization’s decision-making suffers. Effective leaders pay as much attention to governance and decision-making as they do to cost synergies and structure. Most of us know this as the “operating model, ” which is the organizational/ management system that controls 1) interfaces between groups; 2) allocation trade-offs related to distribution of resources; and 3) the rules of engagement and methods for resolving the inevitable conflicts.

While most M&A due diligence and integration activity focuses on who is accountable for what activities, an effective operating model assessment strives also to understand how decisions get made. In a recent engagement with a Japanese pharmaceutical company expanding into the U.S. market, most of the prework had focused on establishing budgets and functional accountabilities. As a result, there was great confusion about how decisions were to be made regarding which drug development projects to advance and fund (e.g. decision criteria, decision rights, etc.). To speed up decision-making and defuse increasing tensions, we worked with this client to negotiate an agreement between the Japanese HQ and the new U.S. affiliate relative to how pipeline decisions would be made.

4. Conflict is necessary — and manageable. In the context of M&A or other organizational transformations, conflict is actually desirable to the extent it can be managed. To generate enterprise value, leaders must be prepared to rock the boat. Many leaders are uncomfortable with conflict, but they must be willing to show people that tough decisions and well-managed conflict are necessary and explain how they will make the organization healthier in the long run.

I will never forget a post-merger integration project in which I was advising a newly formed R&D leadership team. This was a team that had already established two unhealthy norms: 1) agreeing to new projects without agreeing which other projects would need to be put on hold, and 2) debating and challenging nearly every decision in a quasi-academic process. As a result, the head of R&D was frustrated that progress was not being made on the new strategy because resources were still being applied to legacy projects, and decision-making was painfully slow. We worked with the team to establish clear criteria and norms for how to identify and manage the inevitable conflicts between old and new projects.

At one critical point in the process, the R&D head slammed his fist on the table and exclaimed, “I’ve told you repeatedly what our priorities are, why aren’t we making progress?” A lieutenant sheepishly raised his hand and replied, “Because anyone who has dared to disagree with you is no longer on the team.” So, without clear norms and mechanisms for identifying and dealing with conflict and disagreement, the team had just learned to say “yes” and then continued to quietly pursue its own priorities. It wasn’t until a year after the merger and multiple changes in the composition of the leadership team that we led the leadership team through a contracting process to determine how it would constructively manage conflict.

If we agree that M&A activity will remain a part of the industry game plan, then to reap the maximum financial benefit from M&As while also safeguarding the firm’s ability to innovate, leaders need to integrate these strategies for dealing with the intangibles of human capital — which can account for the greatest potential for value creation and innovation.