Evolva Turns Around Its Business Model: Swiss Biotech Opts Out Of Drug Development

Drug development is a tough proposition for the biotechnology industry. The targets today are complex disease conditions whose molecular bases may be poorly or not at all understood. Potential pharmacologic agents that inhibit critical metabolic pathways will frequently generate unanticipated and life-threatening side effects.

Preclinical screening of drug candidates may yield encouraging results based on data from lab animals and cell cultures that cannot be substantiated in clinical trials. And in Phase 1 studies on very small numbers of human subjects, positive data is often not confirmed in expanded, double-blinded Phase 2/3 trials on large, randomly chosen populations. 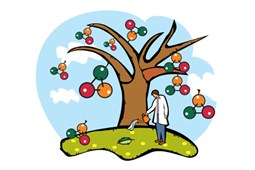 With so many barriers to achieving a successful new drug entry, it is hardly surprising that some biotechs have looked for alternative directions for their technological base. Evolva, a Swiss-based company, has turned from drug development to making ingredients of industrial and culinary value. Mr. Neil Goldsmith, CEO, explained that the company started with a traditional focus on drug development, but three years ago switched gradually to nutritional biotech, aiming at high-value food ingredients such as flavorings and spices that cannot be produced through synthetic chemistry in a cost-effective manner. Evolva’s technology is also being applied to the search for cosmetic components, such as natural pigments and colorants, yet the company still maintains a toehold in its original pharma commitments.

Evolva’s Strategy for Molecular Development
Evolva uses a yeast-based procedure to optimize the pathways for expression of small molecules. This approach is quite different from the conventional tactic that dominates the pharmaceutical and chemical industries. The Evolva technology uses yeast cells programmed with gene libraries in which billions of combinations are expressed. These combinations can be tested by subjecting cells to a selective process in which the most efficient biosynthetic pathway for producing the target is favored. The rare cells that produce the desired compound or ingredient most readily can be detected by fluorescent reporter signals, and hundreds of these candidates can be set aside and the process repeated.

Goldsmith explained Evolva’s decision to move in the direction of nonpharmacological molecules. At the company’s inception, the focus was on various drug candidates, and nonpharma compounds were not a high priority. “However, we received a lot of interest from companies outside the pharma sphere, notably a small company, Abunda,” he stated. “Initially we viewed these inquiries as tangential to our main mission of drug development, but then we realized that what they were proposing would fit our technology better. There are no risks brought about by an adverse clinical outcome, there is a much shorter timeline of three to five years, and the cost to market is considerably less. So based on these factors, we decided this was a better business proposition. But it did not arrive as an overnight revelation; we started several years ago talking about what other ingredients we might go after.”

“It was a very big decision. I am amazed that we were able to pull it off. We had to convince a number of people that we weren’t completely mad, but rather the original thesis was flawed and we needed to change it. So we built our arguments based on financial markets and technical analysis. Because we had already negotiated deals in the space, we were able to reassure skeptics that there was genuine interest in the specialized nutritionals marketplace. The fact that companies such as Nestlé were making moves in this direction helped to show that very large corporations were comfortable with this concept. Other companies, including DSM and Unilever, are moving in that direction, but as a Swiss-based company, it is fair to say that Nestlé had the most impact on our thinking.”

Another problem that Goldsmith had to confront was the mindset of many venture capital investors and some members of his board. “Because it’s conventional wisdom that the money for biotech is in therapeutics, and that was the space most of them knew, they were pretty uncomfortable with the change. Their argument was, ‘Why plunge off into an unknown area which would appear on the face of it to have much less blockbuster potential?’ Fortunately we had people who knew and understood this commercial landscape. Convincing the staff to adopt the concept was the easy part, because we didn’t have to develop new technology.”

“During the interim, we inevitably looked a bit muddled. So we talked to a cross section of people, including customers and industry consultants over an extended time frame to stress-test our ideas. We accomplished this by constructing best case/worst case scenarios for various outcomes on both our current and new strategies and looked at what it took for one to beat out the other.”

Goldsmith believes that while the newly designed game plan won’t yield multibillion dollar drugs, the company will achieve a high level of consistent success and return on investment.

Evolva Considers a Range of Possible Molecules
One of Evolva’s major projects is Stevia, a plant that produces a popular sugar substitute. Although economic considerations are fundamental for any profit- based enterprise, Goldsmith said the company is also committed to generating products that have direct benefit to humanity. “One of the most important conversations we had in the midst of this transition was explaining to our employees that getting Stevia to market would have a major impact on world health, affecting millions of people through improved nutrition.”

In addition to Stevia, the company is pursuing a number of food components including saffron, vanilla, resveratrol, and pomecin. When asked how the company decided what products to go after, Goldsmith replied, “We built a standardized assessment plan to match the products to the demands of the marketplace. An internal team contributed to building the criteria. With this accomplished, we implemented it by prioritizing all potential projects against these criteria using the usual market and technical analyses. Some of these, however, are proprietary, and I’m not able to provide additional details at this time.”

Implementing a New Strategy
Goldsmith stated that the pivotal point in deciding to move the company away from pharma products occurred when Evolva acquired Abunda, a San Francisco-based company funded through venture capital. Abunda developed food ingredients, taking advantage of biochemical analysis of their nutritional components. The company’s long-term aim was to push forward unmet global needs in dietary management.

Evolva and Abunda had collaborated since 2009. One part of this partnership, using Evolva’s proprietary technology, succeeded in making the key components of Stevia via fermentation in yeast. This process bypasses the complex needs associated with the traditional cultivation, processing, and refining of Stevia plants and allows the Stevia glycosides (the chemical substances responsible for the plant’s sweetness) to be produced directly.

The value of the global sweetener market is currently estimated at $78 billion, with sugar far and away the dominant component, commanding approximately 85 percent of sales. Within this commercial space, Stevia-based sweeteners are the fastest-growing segment, reflecting increasing consumer demand for health food products that are low-carbohydrate and low-sugar. By enabling the introduction of new sweetener products with compelling benefits for consumers, pure fermentation-derived Stevia components can dominate an important part of the overall sweetener market.

The original Stevia products had a bitter, licorice-like aftertaste which can be eliminated by selecting the appropriate glycosides. So by producing the individual components, Evolva can generate a much better-tasting sugar substitute that will fulfill the needs of the consumer.

While it is clear that the public will not accept veggie burgers or other poorly made, ersatz food substitutes, Evolva may be on the wave of a revolution in food production. In recent months PayPal cofounder Peter Thiel’s company, Hampton Creek Foods, has developed plant-based substitutes for meat and eggs that are realistic enough to attract funding from Bill Gates, among others.

But he is sanguine: “During 2013 they have recovered to the point where we are back above the price at which we went public. And I think this is in large part because investors eventually have come to understand the change we have made. We’ll see what the future holds.”