I was 13 and a “rebel without a cause.” I used my body in every way I could in sports. I also performed in musicals, which is how I twisted my ankle — at a Music Man rehearsal. That one incident would send me on a 15-year downward spiral.

When the swelling in my ankle wouldn’t go down, my folks sought medical attention. Eventually, I was diagnosed with Crohn’s disease and inflammatory arthritis. Pain, swelling, and skin ulcers led to hospitalizations and to my trying more than 20 different biopharmaceuticals — all without relief. In fact, one long-term anti-inflammatory gave me osteoporosis, typically seen in women three times my age.

Then, in 2014, I was intrigued by a video on Huffington Post about a new medical field called “bioelectronic medicine.” Described as a fusion of neuroscience, molecular biology, and bioengineering, it treats inflammatory diseases, like mine, without drugs. Instead, researchers design highly specialized micromedical devices to transmit electrical signals through the vagus nerve to modulate inflammation in the immune system.

The person in the Huffington Post video was Dr. Kevin Tracey, CEO at the Feinstein Institutes for Medical Research in Manhasset, on Long Island, NY. Tracey said that if you could control inflammation, you could treat inflammatory diseases that previously required immunosuppressants that failed many others and me. Filled with hope, I reached out to him to learn more. Three years later, I found out that a clinical trial was about to be conducted in the Netherlands by SetPoint Medical, a company Tracey cofounded.

Once I was approved for that Crohn’s trial, I relocated for six months to the land of windmills. That was in June 2017. There, a pacemaker-like bioelectronic device was implanted, connecting to my vagus nerve. That nerve, I learned, is the route of information transfer from the brain to the body’s organs. I was treated with electric impulses through that nerve in my neck. It seemed to me that while medicine negotiated with the body, electrical impulses commanded the body.

Within two weeks of my implant’s activation, I realized while running late for an appointment that I had actually run up two flights of stairs — without thinking about it. After eight weeks of stimulation, the pain was gone! I was in remission.

Before I discovered the vagus nerve implant, I was scared and concerned for my future. There’s a song called If I Die Young, and I recall the first time I heard it I broke down in tears because I was petrified of not becoming an old woman. But I never really shared those feelings with anyone, and I persevered. I am still persevering.

When I was originally diagnosed and the use of my body was taken away from me, I had to learn to adapt. Suddenly, after years of using a cane and wheelchair, I was on a treadmill, running two miles a day. I gave my cane to Dr. Tracey; it seemed to me that he should have the thing I no longer needed, as I no longer needed it because of him. 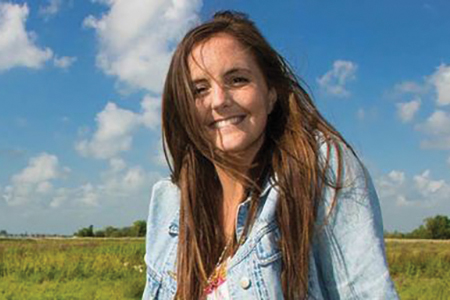 "When I was originally diagnosed and the use of my body was taken away from me, I had to learn to adapt. Suddenly, after years of using a cane and wheelchair, I was on a treadmill, running two miles a day."

Ironically, I wouldn’t be the woman I am today without Crohn’s. As awful as Crohn’s is, I really like who I’ve become because of it. Although I’m not one to say everything has a silver lining, I’m still glad I’ve had this experience because without it, I don’t know if I would notice the things I do now. Today, for example, when I hear wind blowing through the leaves, I take a moment to listen and appreciate the songs nature plays.