We live in surreal times where budget deficits are at record highs, yet the troubling state of affairs seems to embolden rather than hinder even more reckless ideas to expand the reach and obligations of government in ways that would have been seen as unfathomable even a year or two ago.

Case in point: the Medicare Trustees recently announced that Medicare will go broke in 2026, meaning the resources for the hospital insurance fund will not be able to cover expenses for the current 60 million seniors and disabled on the program.

No problem — Senator Bernie Sanders (I-VT), and now nearly every major Democratic candidate running for president as well as 108 house Democrats, are pushing legislation to put EVERY American on that program.

“Medicare for All” would throw 180 million people off their privately purchased health insurance and require the already destitute Medicare program to finance their care. The liberal Urban Institute estimates the program would cost $32 trillion over the next decade.

All sectors of healthcare — hospitals, insurers, pharmaceuticals, and physicians — are now beginning to mobilize to fend off this brewing threat to their existence.

The dimensions of the nation’s fiscal challenges came into focus last week when the Congressional Budget Office released its baseline projections that deficits would average 4.3 percent of GDP for the next decade. Other than the period immediately after World War II, the only other time the average deficit has been so large over so many years was after the 2007–2009 recession.

“We’re only halfway through this fiscal year and the deficit has already reached a staggering $691 billion. That’s higher than all but five full-year deficits in U.S. history,” commented Michael Peterson of the
Peterson Foundation.

What is most concerning is that this debt is escalating while the economy is recording record highs in nearly every metric of economic activity: robust GDP growth, stock market highs, and low unemployment. The last times unemployment was at its current 3.7 percent were in 2000 and 1969 when the federal government ran a surplus!

See the nearby graph showing today’s debt-to-GDP ratio is at historic highs.

The bottom will fall out!

The Committee for a Responsible Federal Budget described the political and policy challenge as follows: “Though the national debt is at a postwar high, the willingness of policymakers to address it seems as if it is at an all-time low. The last two years have been defined by massive, unpaid-for tax cuts and spending increases, with little attention to addressing near- or long-term fiscal imbalances.

“Meanwhile, commenters on the left and right are increasingly urging Washington to ignore mounting debt levels and instead focus on enacting new costly initiatives while protecting special-interest tax breaks and spending programs.”

Case in point: President Trump and the bipartisan congressional leadership are now closing in on a $2 trillion infrastructure deal.  How will that be financed? Gas taxes are extremely unpopular and certainly can’t cover more than a fraction of that cost.

Now presidential candidates Senators Elizabeth Warren (D-MA) and Sanders are urging the government absolution of $1.3 trillion of student debt and adoption of tuition-free college for future students. Will that encourage colleges to raise or lower tuition rates? The students freely entered into contracts, pledging to pay back these borrowed resources that they invested to improve their future earnings. Others chose to go to cheaper colleges or scrimped and paid along the way to minimize their debt. 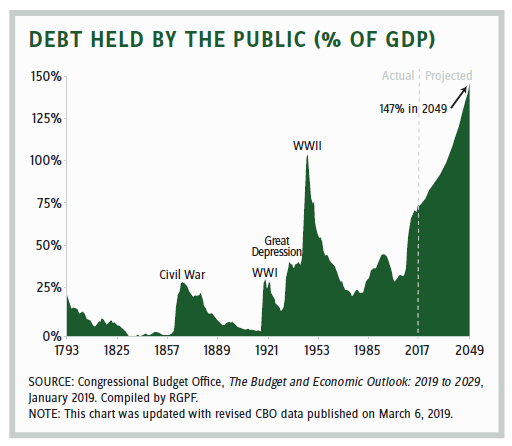 Why assist the former group over the latter? More important, why not focus on restraining tuition escalation, which is driving these costs by requiring a larger portion of college endowments to be deployed for student tuition assistance or be subject to taxation?

Why does government debt matter at all? Can’t the U.S. simply print more money to defer these problems?

No. Rising debt requires taxpayers to spend an increasing share of their contributions on interest payments on the debt rather than actual government services and investments. In fiscal year 2018, the federal government spent $371 billion on net interest – almost as much as Medicare, at $389 billion. But interest was up $62 billion, or 20 percent, from the previous year compared to just 3 percent for Medicare. Financing the debt will soon cost more than providing healthcare to our seniors and disabled.

However, Congress is currently focused on exacerbating, not resolving, the problems. House Budget Chairman John Yarmuth’s (D-KY) bill would bust the budget caps agreement and add $360 billion of deficit spending for the next two years. Democrats could not pass that in April because progressives argued that it was not enough spending for their priorities.

Just as concerning, profligacy is not limited to fiscal policy. Aggressive monetary policy is fueling inequality, which in turn is fomenting socialist dogma that can undermine and ultimately overthrow the greatest system of wealth creation and poverty elimination ever seen in the history of the planet. The younger generations are more enamored with socialism, in part, due to these results.

Tyler Durden of the Zero Hedge blog explains, “Bernanke’s quantitative easing, also known as large-scale asset purchases, inflated asset prices and bailed out baby boomers at the political cost of pricing out millennials from many asset markets, including homes and the stock market. That has since driven wealth inequality across the country to levels never seen before.

“When expansionary monetary policy drives asset prices higher than wage growth, the average person, or the entire bottom 90 percent of Americans, fall behind the curve. The faster the asset-fueled economy expands, the wider inequality becomes. This threatens the social contract based on the belief that as the economy grows, the better off everyone becomes, or the idea that capitalism works for everyone.

“One of the side effects of money printing is starting to be realized. Generation Z and millennials are embracing socialistic policies and principles more than ever.”

The split Congress must come to an agreement on how to fund the expiring discretionary “budget caps” later this year. There are only two ways to finance increased discretionary spending for defense and domestic priorities: 1) tax increases or 2) cuts to entitlement spending. Medicare is the biggest target for entitlement spending cuts, and pharmaceuticals are currently the biggest target for those cuts.

A plethora of proposals are currently under consideration to wring resources out of the pharmaceutical industry, and several are now working their way through the process. But no amount of money that can be extracted from the life sciences sector can right-size the fundamental imbalance between the federal government’s financial obligations and taxpayers’ resources to finance those promises.

Something has to give, and we are near the breaking point!