Gaining Recognition For A Novel Portfolio — Deal By Deal

After an impressive series of deals with big and midsize pharmas, Pieris Pharmaceuticals finds itself at an inflection point, close to several important data releases and, if all goes well, to signing a partner for its most advanced candidate. 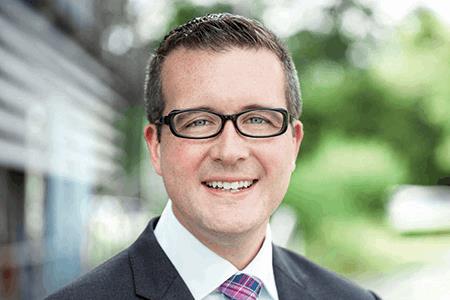 Founded in Freising, Germany, in 2001 as a spinoff from the Technical University of Munich, Pieris emerged with rights to an antibody-like protein technology called anticalins and with backing from a syndicate of European investors. Stephen Yoder took over as CEO in 2010 after an eight-year stint at MorphoSys serving as head of IP, general counsel, and later as head of out licensing. In 2015 the company moved its headquarters to Boston and completed an IPO on the NASDAQ.

Anticalins are basically a new therapeutic modality. Derived from endogenous human proteins called lipocalins, they differ from antibodies in being eight times smaller and of considerably less molecular weight. These and other structural properties permit them to be formulated for inhaled delivery or as a sustained-release depot. They are nonimmunogenic, can easily be formatted in bispecific and multispecific constructs, provide superior tissue penetration, and can be produced in bacterial cells at lower cost than antibodies. In short, their human origin makes them safer and their physical properties enable them to bind not only larger proteins but also targets previously considered too small for other protein approaches, including hapten-like targets and small molecules.

BALANCING INNOVATION AND EXECUTION
Yoder comes across as crisp and thoughtful for a 41-year-old, first-time CEO. When he started at Pieris, his mandate was quite different from what it is now. “We were backed by rather fatigued European VCs who needed an exit because their funds were aging and their LPs (limited partners) were calling.” The idea back then was to close a few deals, validate the technology, pay the bills, and, with luck, repay his investors with a trade sale.

But he found that selling an early-stage platform company was challenging. Yoder chalks that plan up to being green. So he and his team decided to build the company for long-term value, to invest in disease biology that might unlock key benefits of anticalins where antibodies would have a high barrier to entry. After a lot of soul searching, he settled on the idea of targeted co-stim. In immuno-oncology (IO), T-cell co-stimulation through agonist receptors (e.g., OX40, GITR, 4-1BB) is an extremely active area of R&D where co-stim agonist antibodies are combined with antagonist checkpoint antibodies (e.g., PD-1 or CTLA-4). Co-stim antibodies are believed to promote the expansion and proliferation of killer CD8 and helper CD4 T cells — types of white blood cells that lead the attack against infections.

That’s the innovation side of the company.

How Pieris goes about lining up partnerships to advance its pipeline of bi- and multi-specific anticalins is the execution part. It requires the discipline to limit the portfolio to the IO and autoimmune respiratory categories, the smarts to know which ideas to invest in, and the patience and assets to lure the right partners to the negotiating table.

It also calls for the flexibility to know that no business strategy is written in stone; rather, strategy evolves as the science, policy, and competitive dynamics change.

A STEADY STREAM OF PARTNERS
Over the past seven years, Pieris has executed a series of collaborations and partnerships that have progressed with respect to terms and economics, and have accelerated in the past two years. The company lists seven deals on its website dating back to 2010.

In fact, it also has inked collaborations with Takeda (2011) and Allergan (2009) in which it provided anticalin discovery expertise in return for a small up front. Extensive restructurings — Pieris was partnered with Takeda San Francisco; in 2012 the San Francisco campus closed and was consolidated with San Diego — scuttled the Takeda collaboration; and of the Allergan deal, Yoder says, following Allergan’s hectic period of mergers and acquisitions, “It is the slowest diligent development of a molecule I’ve ever seen.” He ascribes no value to it. The table below shows Pieris’ current key partnerships.

The recent AstraZeneca partnership reflected Yoder’s confidence coming off the Servier deal. He pushed hard for the terms, and he got them, signaling that he and his team were prepared to take PRS-060 to proof of concept on their own. He maintains that partnering ’060 early allowed Pieris to lock in to the inhalation device that it would ultimately be commercialized in. “We don’t have to make any bets about the device,” he says, “and that accelerates time to market — real value for shareholders.” Moreover, ’060 would be able to enter the market at a lower dose and lower cost. 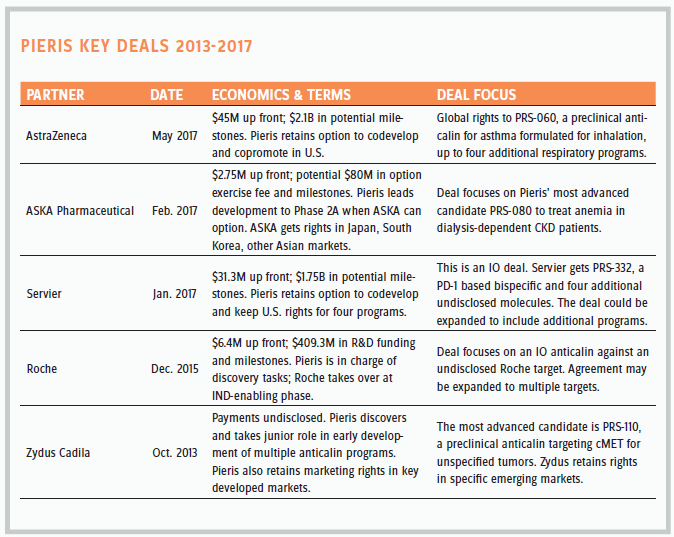 AstraZeneca is a world leader in formulation and devices for respiratory therapies — that helped to de-risk the deal. So did the fact that ’060 hits ILR4, the same target as Regeneron’s dupilumab, which is approved for atopic eczema and in a pivotal trial for asthma; but where dupilumab is a subcutaneous injection, ’060 will be inhaled.

ASKA was all about PRS-080 for anemia, a noncore asset in the new immunology-focused Pieris. Recent positive Phase 1 data raise the chances that ASKA will pay to option the drug at Phase 2A. ASKA is a small/ midsize Japanese company.

Yoder says the Servier deal “was about doubling our footprint without sacrificing back-end economics.” He met a number of objectives in his first big IO partnership: First, he wanted to hold onto his wholly owned IO asset PRS-343 — a 4-1BB targeting anticalin linked to a HER2 targeting antibody — for as long as possible. He also wanted to score a significant up front in order to extend the runway and bridge through some near-term clinical inflection points such as advancing PRS-343 through its Phase 1 multi-ascending dose trial (data available second half of 2018 [2H18]). Finally, he wanted commercial rights in the U.S. and the freedom to do additional IO partnerships.

Yoder sees ASKA and Servier as being much like Pieris — scrappy and hungry.

The Roche deal was all about validation. The industry’s preeminent cancer powerhouse saw something in little Pieris’ technology. It was a single target discovery collaboration, not much different from Daiichi or Sanofi, but with superior downstream economics. “It helped set the table for building our confidence and getting our name out in the industry,” Yoder says.

Zydus is a slow-moving collaboration, the first deal where Pieris secured U.S. rights. “But it’s not top of mind for us now.”

Pieris’ collaborations with Daiichi and Sanofi go back in time; their economics pale beside the more recent deals. Daiichi focused on two anticalin programs against in-house targets. One was against PCSK9. That market proved less attractive when the agent recently emerged from Phase 1, so Daiichi returned rights to Pieris, but it’s still pursuing the second target. The Sanofi deal focuses on a tetra-specific anticalin against Pseudomonas aeruginosa pathogens.

The deals have brought in cash and recognition. In fact, the AstraZeneca deal doubled its share price. But Yoder recognizes that, ultimately, deals are not as validating as late-stage data. PRS-080 will be the first anticalin to report proof-of-concept data in humans. If the data proves out, Yoder looks forward to partnering it globally. And he is hoping that PRS-343, which recently started Phase 1, will post strong enough data to warrant accelerated approval.

With all these transactions, Pieris has managed to preserve a proprietary pipeline of IO candidates, in particular, its lead agent PRS-343. There are major compatibility issues with 4-1BB; Yoder cites Bristol-Myers’ urelumab, which has shown some clinical activity, but its therapeutic window is small. PRS-343 “takes that potent co-stim biology at the tumor bed. And it’s using HER2 as a magnet to recruit the immune system to tumors that aren’t responding to HER2 treatments.” Moreover, HER2 is expressed in multiple tumors, including those in the breast, bladder, and gastric areas.

The other proprietary IO program is PRS-342, a preclinical stage 4-1BB/GPC3 bispecific. GPC3, or glypican 3, is an oncofetal antigen with almost no expression in normal adult tissue. Its expression is pronounced in several tumors, including liver cancer, Merkel cell carcinoma, and melanoma.

A FLEXIBLE FUTURE
Pieris is committed to becoming a U.S.-focused company specializing in multispecific anticalins based on validated combinations of co-stim agonists linked to antibodies. For now it’s pursuing low-hanging fruit in IO and immuno-respiratory. Yoder hints that the company sees opportunity in the broader autoimmunity space.

His team continues to push the discovery platform to produce new ideas because “We believe in building the pipeline of tomorrow and using it to drive additional partnerships in the future.” He allows that Pieris may take on more target risk in the future, but for now he’s playing it safe. The AstraZeneca deal has inspired the company to think hard about building out a proprietary respiratory franchise, and he and his team have been meeting with KOLs to become better acquainted with the space.

Yoder doesn’t see other antibody specialists as competitors. “It’s a big sandbox,” he says, confident that Pieris has staked out a particularly fruitful area of biology.

The company is in a good spot. The Phase 2A study of PRS-080 should read out by early 2018; PRS-060 will enter Phase 1 in the second half of 2017; and PRS-343, the asset on which Pieris is betting its IO credibility, was about to recently start a P1 multi-ascending dose study, but FDA requested it modify the dose escalation part of the protocol. Pieris has responded to FDA’s request and is awaiting word from the agency. Yoder still expects to report data in 2H18 and approval could be expedited if it wins breakthrough designation. An increasing number of analysts are covering the stock, too. Yoder is confident, finally, that investors are beginning to get Pieris’ story.