Gender Diversity In Leadership - How Does Biopharma Compare? 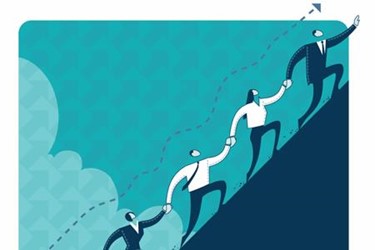 At the most recent J.P. Morgan Healthcare Conference (JPM) in San Francisco, there was much ado regarding gender diversity among company presenters (i.e., more men than women presenting). That’s nothing new. Leadership positions in the world of business, government, and the military — just to name a few — have traditionally been dominated by men. And despite women continuing to make significant strides in earning positions of leadership, there can be little doubt that when it comes to the biopharmaceutical industry, the c-suite glass ceiling remains. Ten biopharmaceutical companies were ranked among the annual 2017 Fortune 500 listing, and not one can claim to be led by a woman CEO (see table 1). 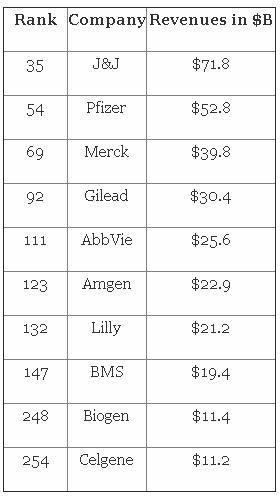 On a more positive women-in-leadership note, 32 of the 2017 Fortune 500 companies were led by women, even in the traditionally male-dominated industries of automotive, defense, and information technology (see table 2).

*Either soon stepping down or no longer holds this position.

But we all know the biopharmaceutical industry is global. Further, we know there are many more positions of leadership beyond the CEO. So I reviewed Fortune’s 2017 Global 2000, which ranks the world’s 2000 largest publicly traded companies. The goal was to see how the 10 largest publicly traded biopharmaceutical companies compared to 10 of the largest publicly traded nonbiopharmaceutical companies in the area of gender diversity among their executive leadership teams (ELTs). The first three companies of the Global 2000 — Industrial & Commercial Bank of China (ICBC), China Construction Bank (CCB), and Berkshire Hathaway — were eliminated from consideration for this comparison for the following reasons. For starters, it didn’t seem reasonable to include companies from China. For though the country has made significant strides on the world stage, what can’t be denied is the minor role that continues to be played by women (leadership-wise) within the world’s most populous country. This notion was confirmed by a review of ICBC’s nine-member senior leadership team which included zero women executives, and CCB’s 16-member senior management team which included one woman, company secretary Chan Mei Sheung. Berkshire Hathaway was not included as it is conglomerate consisting of 63 companies. So while Berkshire Hathaway does have a seven member board of directors, which includes one woman (Susan T. Buffett), and eight corporate officers, which also includes one woman (Rebecca Amick), to provide an accurate reflection of ELT gender diversity within this organization would necessitate an exhaustive review of the leadership teams of the 63 individual businesses.

Other large nonbiopharmaceutical companies of the Global 2000 (rank) excluded from this comparison include: the Agricultural Bank of China (6), Bank of China (8), Toyota (10) based in Japan, Samsung Electronics (15) based in South Korea, and Ping An Insurance Group (16) located in China. A similar cultural rationale was applied for excluding Toyota and Samsung as the companies from China. That being said, the companies included was still robust (see table 3), all of which rank higher than the biggest of Big Pharma. 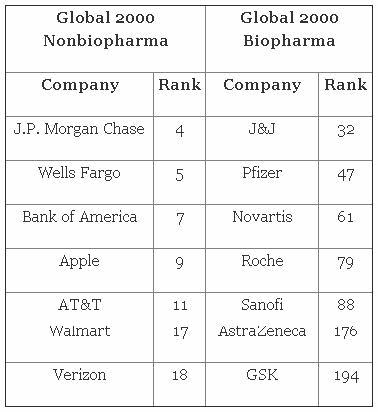 For the comparison, I looked at only company corporate officers, not corporate boards. This is because board members are appointed positions, and outside of the CEO (who often, but not always, serve as the chairman of the board) do not typically hold any responsibility for day-to-day operations. Table 4 illustrates the ELT gender diversity at each company as of 2/8/18. 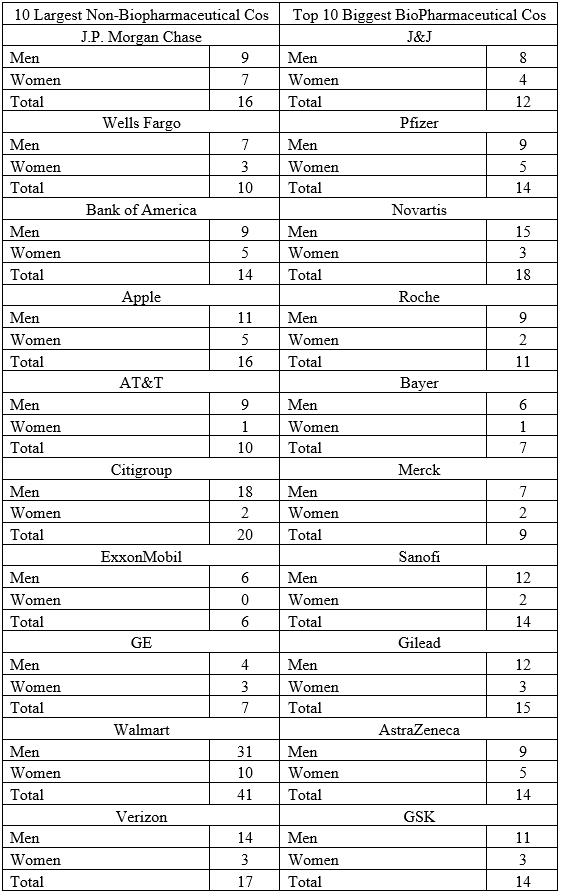 Table 5 is an overall comparison between the two groups of companies. 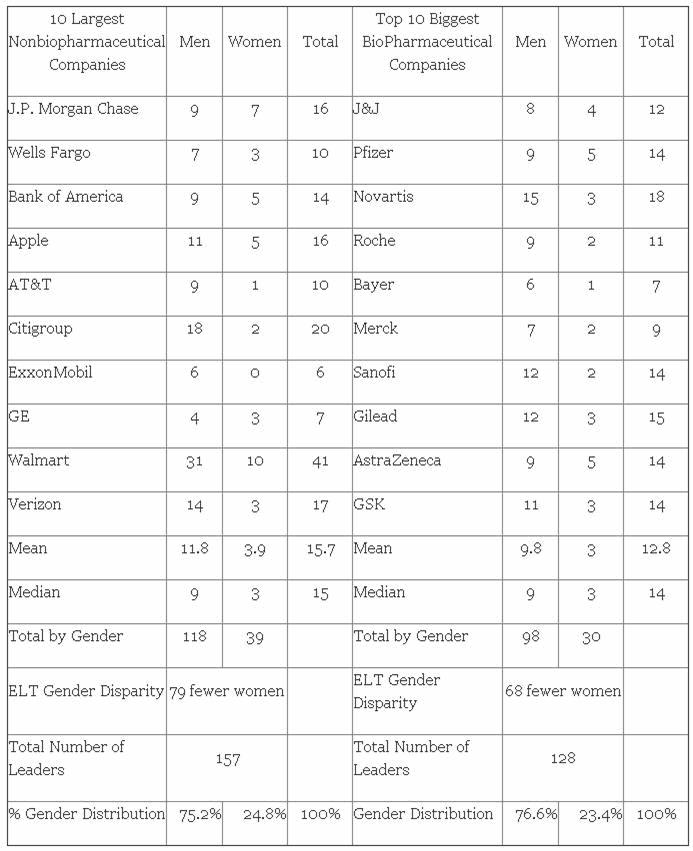 The data provides an interesting reveal. For starters, the 10 largest biopharmas lag (-1.4 percent) when it comes to ELT gender diversity as compared to 10 of the largest companies in the world. An argument could be made that had I not excluded companies from China, Japan, and South Korea, biopharma would have outperformed its counterpart. This is a likely certainty. But as these countries have significantly more homogenous populations to begin with (thereby lacking diversity in general), and seem to have a cultural bias toward women not holding leadership positions, the rationale for their exclusion is sound. Most Asia-Pacific countries lag behind the United States and the EU when it comes to women in positions of leadership, government or otherwise. Additional arguments could be made, such as the 10 biggest companies having 29 more ELT members, thereby providing an increased likelihood of having more women ELT members. This is a valid point. But if we consider WalMart’s 41-member ELT has leadership gender diversity comparable to the 10 combined biopharmas, and the fact women among Citigroup’s 20-member ELT and ExxonMobil’s 6-member ELT constituted 10 and 0 percent respectively, the overall comparison is still fairly valid. In a perfect world each of the 10 company’s ELTs would represent approximately 10 percent of the total. However, as the data reveals, and as we already know, we don’t live in a perfect world, for neither group is leading the way when it comes to having gender diversity well represented among its ELT.

What was perhaps the most interesting reveal of this exercise is the composition of J.P. Morgan Chase’s ELT. The fourth largest publicly traded company in the world (and the biggest company of the 20 comparators) had the highest percentage of women represented on its ELT (see table 6). 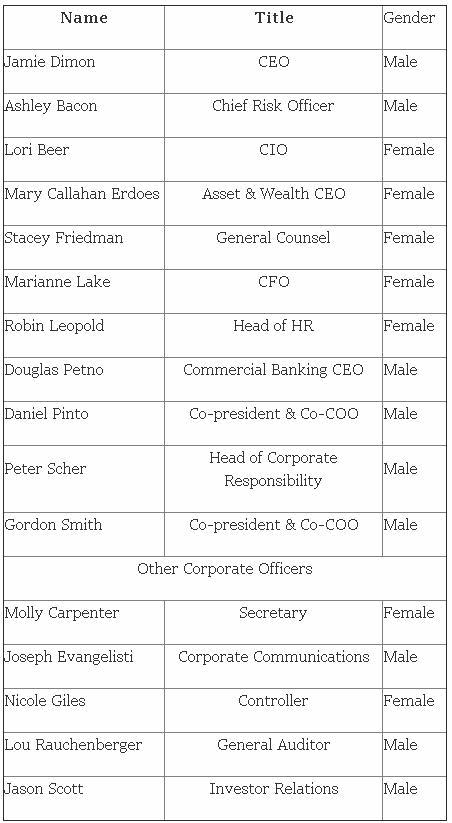 On the whole this analysis showed that when it comes to ELT gender diversity, leading biopharmaceutical companies are on par with other large publicly traded companies in a variety of other industries. While the biopharmaceutical industry is not in “horrible shape” when it comes to ELT gender diversity, there is certainly need for improvement. As this comparison illustrates, none of the 10 biggest biopharmaceutical companies are the worst, or the best, which isn’t very surprising as the pharmaceutical industry is traditionally considered fairly conservative. However, as an industry which consistently boasts of being one of the most innovative in the world, you’d think it would be striving to lead in other important areas as well.

Last March I published, Gender Diversity — Can Biopharma Do Better? This blog highlighted an open letter from MassBio to the BioPharma Community, published January 2017, and listed practices for increasing gender diversity within our industry. Though a large number of executives have taken the time to sign this letter, when it comes to achieving ELT gender diversity in biopharma, or business in general, actions speak louder than signatures.