Pharmaceutical drug sales in the United States totaled roughly $320 billion in 2011, according to IMS Health. Last year, more than 40 brand-name drugs, including blockbusters like Plavix, Lexapro, and Seroquel — valued at $35 billion in annual sales — lost their patent protection.

This year, an additional $17 billion in branded drugs sales is expected to be lost as other blockbusters are scheduled to lose patent protection and be sold as lower-cost generic drugs. While the patent expiry of so many blockbuster brands — the so-called “patent cliff” — should seemingly be good news for generic drug manufacturers, it is making many generic drug company executives extremely anxious. Recently, Heather Bresch, CEO of Mylan, the second- largest generics company in the U.S., quipped, “I can’t go anywhere without being asked about the patent cliff.”

A Changing Generic Drug Landscape
Historically, generic drug manufacturers have relied on the lucrative six-month market exclusivity that follows patent expiry of branded drugs as a major revenue driver. During those periods, companies that are first to file an application with the FDA win the right to sell their generic version of a branded prescription drug exclusively or with little competition. However, the patent cliff has forced generic drug companies to reevaluate that business model. Asa Cox, chief executive and founder of Generic Pharma 2.0, a global generic drug manufacturing consulting firm, said, “The patent cliff is over, and generic drug company executives understand that they can no longer rely on six months of market exclusivity as their main revenue driver.” He added, “There is simply too much competition for too few brands.”

Likewise, Paul Bisaro, CEO of Watson Pharmaceuticals (now Actavis), suggested in a recent article that, while big blockbuster brands like Plavix or Lipitor get a lot of attention when they lose patent protection, patent expiry does not always translate into guaranteed profits for generic drug manufacturers. To that point, generic companies are now scrambling to find creative ways to redefine their business models and reinvent themselves to cope with the impending generic drug drought that is likely to occur over the next few years. Some of these new strategies include selling branded products, specializing in difficult-to-make drugs, and expanding globally into new markets.

New Business Strategies For Generic Drug Companies
Many of the top generic drug companies, including Teva, Actavis, and Mylan, are already selling their own branded products (in addition to generics) to ensure growth and maintain revenue streams. Teva is perhaps the best example of this with Copaxone, its injectable blockbuster drug to treat multiple sclerosis. Mylan’s and Actavis’ sales revenues have also benefited from selling their own branded products including Mylan’s antiallergy EpiPen and Watson’s branded oral female contraceptives and other women’s health products.

Other generic drug makers are going after difficult-to-make products, such as extended-release tablets, patches, creams, and reformulated injectable drugs, based on the notion that with less competition, the prices of these so-called speciality products will not erode as quickly as conventional generic drugs (which can lose as much as 80% of their value once the six-month exclusivity period has expired and the market is flooded with multiple competitors). Scott Tarriff, former CEO of the NY-based generic manufacturer Par Pharmaceuticals and currently CEO of Eagle Pharmaceuticals, believes that specialty pharmaceutical products may represent a major growth opportunity for generic drug makers. “I think the key to success in today’s generic industry is to look for the next products that may be more difficult to develop but will give you a much better return than just developing a simple commodity tablet — it just makes sense,” said Tarriff. He added, “The more innovative generic companies have identified areas where they have acquired the requisite expertise, built some type of barrier to entry (cash, infrastructure, etc.) to prevent competition, and possess the knowledge to continue to build value over time.” 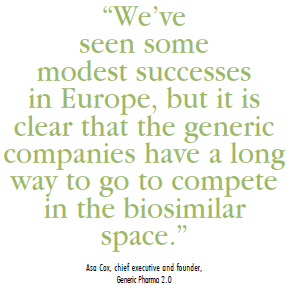 Companies trying to capitalize on difficult-to-make products include Actavis, Teva, Mylan, and Impax Laboratories. Interestingly, Mylan and Teva are competing with one another to bring generic versions of GlaxoSmithKline’s asthma medicine Advair to market. This has been difficult because Advair combines two drugs that are inhaled through a device. Likewise, Actavis is expected to introduce a generic version of Endo Pharmaceuticals’ Lidoderm pain patch next year.

Most U.S. and foreign generic companies are also eyeing biosimilar drugs as a new means to bolster revenue and sustain growth. Since 2004, more than 15 biosimilar products have been approved worldwide. In general, biosimilars cost 20% to 40% less than their branded biologic counterparts. While the size of the global biosimilar market continues to grow, these molecules are still not permitted to be approved or sold in the U.S. — the world’s largest biologics market. Nevertheless, there are currently as many as 50 generic companies, including, Sandoz, Mylan, Teva, Hospira, Biocon, and others, that are developing biosimilar products. “Biosimilars appear to be the next big thing for generic drug makers,” said Kai Wolf, a former Merck Serono executive who helps generic drug manufacturers register their products in Brazil and Latin America. However, Wolf warned, “It’s not going to be as easy or lucrative as many generic companies think.” Generic Pharma 2.0’s Cox agrees, “Biosimilars will require a massive investment in marketing to offset a certain fight by incumbent brands. We’ve seen some modest successes in Europe, but it is clear that the generic companies have a long way to go to compete in the biosimilar space.”

Focus On Emerging Markets
Another approach being used by generic companies to gain an edge and sustain their growth is expanding into global emerging markets. While generic drug use is pervasive in the United States — recent estimates indicate that roughly 80% of prescriptions are filled with generic drugs — its popularity is growing in other markets including Europe and Japan. In 2007, Mylan bought Germanybased Merck KGaA’s generics business, and in 2012 it entered into a strategic partnership with Pfizer to sell generic drugs in Japan.

More recently, Mylan entered into an exclusive strategic collaboration with India-based Biocon for global development and commercialization of Biocon’s Glargine, the generic version of Sanofi’s Lantus; Lispro, the generic version of Eli Lilly’s Humalog; and Aspart, the generic version of Novo Nordisk’s NovoLog. Also, last year, U.S.-based Watson Pharmaceuticals purchased the Swiss drug maker Actavis Group for $5.9 billion, increasing its presence in overseas markets. After the acquisition, Watson changed its name to Actavis, which is better known internationally and is likely to provide a better global reach into emerging markets like China, India, Brazil, and elsewhere. “The generic industry is exploding in Brazil and Latin America,” said Wolf. However, Generic Pharma 2.0’s Cox warns, “While many generic drug companies are focusing on emerging markets, these opportunities often present more challenges than solutions.” He recommended that companies seeking to penetrate these markets should proceed with caution to gain a better understanding of regional and national market dynamics before making a final decision.

The Future Is Innovation
The generic drug industry, much like the branded pharmaceutical industry, is in transition and rapidly changing. But, as Eagle Pharmaceutical’s Tarriff emphasized, “The generic drug industry is filled with extremely talented people who will continue to innovate and find ways to compete and make money. And I don’t think that this industry is going away anytime soon.” Cox offered a different perspective. He said, “I think generic companies will be highly marginalized unless they can plot a path to being involved in the service-oriented, personalizedtreatment healthcare sector of the future. The rapid evolution of technology, data, and education, combined with the dynamics of funding, fulfillment, and regulation, will create a very different drug industry compared to the one we have today.” Nevertheless, both Tarriff and Cox agree that innovation is the key to the future success of the generic drug industry.