There is no doubt that global pharmaceutical companies have a desperate need to develop better drugs with high success rates. Consequently, more drug companies are utilizing external resources, while still constantly streamlining their internal R&D systems. 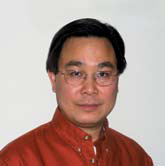 Today, externalization has become a core strategy among pharmaceutical and biotechnology companies for all types of activity, including R&D and manufacturing. In fact, the original concept of outsourcing has now been expanded to include all types of collaboration, including partnership and technology licensing.

Drug discovery has been one of the core sectors of the long value chain of drug R&D. However, in recent years, almost all major pharma and biopharma companies have focused on developing late-stage drug candidates due largely to the global financial crisis and the pressure of patent expirations of blockbuster drugs. Drug discovery research has been less focused, with many companies primarily relying on external resources, including R&D-focused biotech companies and professional discovery research service providers (e.g., CROs).

This focus on late-stage development is now making many large pharma and biopharma companies realize that their early-stage pipelines have become thin. Drug discovery research has, thus, recently regained focus among these companies. However, their research strategy in this field has changed significantly.

NEW STRATEGIES FOR DRUG DISCOVERY RESEARCH
New R&D strategies are constantly evolving in global pharmaceutical and biopharmaceutical industries. The virtual drug discovery model for small molecules that is popular with R&D-focused small biotech companies is now becoming accepted by the large players in the industry. Some of them are currently practicing this model in various therapeutic areas.

Meanwhile, all drug companies have now recognized that early-stage drug discovery is not just for identifying a new medical (either chemical or biological) entity for a target. Rather, it is about validating the identified therapeutic target and better understanding the disease biology, pathology, and interactions between the compound and the target (as well as those off-targets). Thus, biology-guided drug discovery has become a new trend in today’s pharmaceutical industry. Consequently, major pharma and biopharma companies are more focused than ever on understanding disease biology in order to have more accurate therapeutic targets and to employ new technologies to truly improve R&D success rates.

NEW DRUG DISCOVERY OUTSOURCING STRATEGIES
Along with the change of their discovery research strategy and practice, major pharma and biopharma companies have been shifting their outsourcing strategy from a risk-sharing emphasized model to a more technology-concentrated partnership. Discovering new therapeutic targets and thoroughly validating them have become the new priorities of drug discovery research. The integrated drug discovery outsourcing model has become the prevailing trend.

To this end, drug companies need the involvement of academia in early drug discovery more than ever. Almost all global major pharma and biopharma companies have forged close partnerships with a number of academic research institutions in recent years. Moreover, they are increasingly integrating human genetics research into their discovery and development programs. Genomics and proteomics have been widely employed not only in drug development, such as for the development of companion diagnostics and patient stratification, but also in drug discovery, such as for target identification and validation, safety biomarker development and application, and development of novel antibody drugs. In all these R&D activities, academia is playing increasingly important roles.

The new outsourcing strategy also is creating broader collaborations, not only with peer competitors, technology-bearing biotech companies, and professional outsourcing service providers, but also with academics, for both drug discovery research and new therapeutic target identification and validation. The latter includes not only pure research on disease biology but also discovery and validation of new biomarkers and their applications. Indeed, academia has become the third key element of many companies’ R&D efforts. 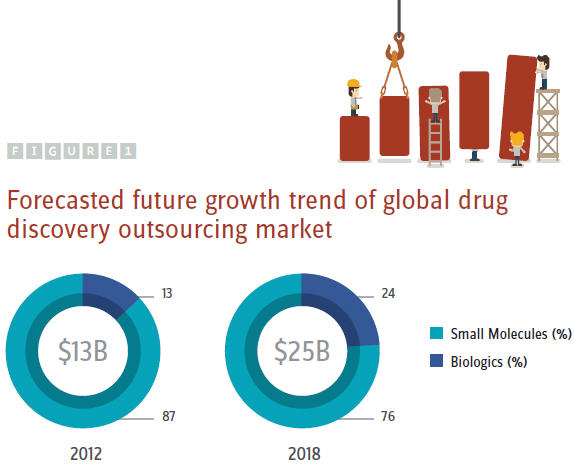 BIOLOGIC DRUG DISCOVERY BECOMING NEW FOCUS
Biologic drugs, especially novel antibodies, have become as important a class of therapeutics as traditional small molecule drugs. That’s why they have been steadily gaining share in the pipelines of major pharma companies. This has caused many companies to create dual-track drug discovery programs for both small molecules and biologics. To do so often requires two separate R&D systems, each focusing on one field.

Methodologically, biologic drug discovery research is operated just like that for small molecules. Compound libraries of antibodies, proteins, and peptides are in high demand. Similarly, antibody fragments that are smaller in size, but still antibodies by nature, are also being employed in biologic drug discovery research. However, in this area, the most advanced technologies are developed by specialty biotech companies. To a large extent, major pharma and biopharma companies currently rely on these companies for the new technologies or for filling their pipelines.

EMERGING COUNTRIES PLAY INCREASINGLY IMPORTANT ROLES, ESPECIALLY FOR SMALL MOLECULE DRUG DISCOVERY
Until now, the most desirable technology in drug discovery research has been compound libraries with diverse structures. A Jim Zhang is president of JZMed, Inc., a market research firm specializing in pharmaceutical outsourcing. This article is partially based on the firm’s latest research report “The New Trends of Global Drug Discovery Outsourcing.” fragment-based lead discovery platform or high throughput screening of thousands of compounds against the selected therapeutic targets has still been the main approach. However, this type of R&D work, especially the construction of small molecule compound libraries, has now been considered to be approaching maturity. Few drug companies large or small are now willing to assemble a large, internal team of synthetic organic chemists to do it. The majority has, instead, been outsourced, including to low-cost emerging countries. In recent years, emerging countries, in particular China and India, have been the main places for global drug companies to look for focused compound libraries of small molecules that possess diverse structural features.

FUTURE GROWTH POTENTIALS
According to our research, in the past few years, the global drug discovery outsourcing market has been growing at a CAGR of about 10.5 percent. Its current market size is estimated at $13B, accounting for close to 10 percent of the current total global drug R&D spending. Of the total market value, the small molecule drug discovery outsourcing service market accounts for about 87 percent, reaching about $11.25B. Between 2009 and 2012, its CAGR was around 11 percent. The current biologic drug discovery outsourcing market is estimated at only about $1.75 B, accounting for about 13 percent of the current total global market. However, its CAGR from 2009 to 2012 was about 37 percent.