How Biopharma Came Together To Impact Poverty In Boston

In greater Boston, some well-established industries have played a significant role in philanthropy. But you might be surprised to learn that, until recently, biopharma wasn’t considered one of them.

"People involved in philanthropy in the Boston Cambridge area often point to financial services, the legal profession, and technology, as all of these industries have been at it for a while,” says biopharma veteran Rob Perez. “They’ll tell you they see some good things being done by Vertex and Biogen. But if biopharma is the leading industry in the Commonwealth, then why aren’t we seeing other companies mentioned?”

Perhaps part of the problem stems from the fact that, while there are a few large biopharmas with facilities in the area, the vast majority are small and relatively early-stage companies just struggling to keep the lights on. Perez had worked at various Boston biopharmas (e.g., Biogen) and was at the helm of Cubist (Lexington, MA) when it was acquired by Merck. “I was proud of the Cubist culture, a big part of which was our commitment to the community. This is one of the ways we were able to attract extraordinary people and keep them engaged, so it’s always been a big part of my wiring.” So, when Cubist ended, Perez saw an opportunity to do something even bigger philanthropically for the local community. “It struck me in the middle of the night, that perhaps we in biopharma could pool our resources — both human and financial — and see what we could do to impact poverty in greater Boston. So we created Life Science Cares.”

Perez founded Life Science Cares in 2016, and he serves as the organization’s chairman. He describes it as a collective effort of the life sciences industry to eliminate the impact of poverty in the greater Boston area. “If you look at our website, you’ll see we have the who’s who of life science leaders, CEOs, and C-suite advisors,” Perez boasts. But these people aren’t just lending their names to the cause, they’re personally vested. “Every one of the 150 people listed on our board of advisors is writing a check to cover all of the administrative costs of this effort,” he elaborates. “That way, 100 percent of every dollar raised from either an individual or company goes directly to fighting poverty.” This not only shows the commitment of biopharma leaders but their commitment to doing right by the people they serve. Further, it helps to avoid problems faced by other charities where a percentage of every dollar given goes to covering administrative, nonoperating, and fundraising expenses. For example, even a highly reputable charity such as the United Way faces the reality of roughly 16 cents of every dollar given being used to cover the organization’s administrative costs.

So how does Life Science Cares go about impacting poverty in the greater Boston area? “We select the leading nonprofit providers to partner with in these three areas: basic human survival, education, and economic sustainability,” said Executive Director Sarah MacDonald, who runs the organization day-to-day. Thus far, the organization has partnered with 36 nonprofits. And while proud of the fact that Life Science Cares, in its short existence, has already given nearly $2 million to these partners, Perez views money as just one of many points of entry toward making a difference. Because where the organization really shines is in its ability to engage with these partners to impact more people more effectively. “Essentially, we work with them on volunteer efforts, strategic help, real estate, in-kind donations, and a whole bunch of other things we can help them do bigger and better.”

But you might be wondering how the partners are selected. For starters, they are nominated by members of the board of advisors. For example, in 2019 there were about 100 nonprofits nominated, and in December, 27 partners were chosen for 2020. Perez says the review is one of the hardest parts because there are so many worthy organizations. “Unfortunately, we can’t work with them all,” he laments. Partners are vetted around three general categories, beginning with effectiveness. “We want to see results, such as how effective they are at delivering their service.” Second is efficiency (i.e., how much money goes to administrative costs and other things that don’t deliver on the actual mission). “ Sometimes, that’s a tie-breaker between two nonprofits,” he admits. And the third category is engagement. “Our model works best when we can get involved actively.” In other words, Life Science Cares isn’t out to be the biggest check writer, though it can write decent-sized checks. “But that’s not why our partners love us. They love us because we can get our community, employees, and leaders involved, so they must have an engagement model that allows us to do so.” 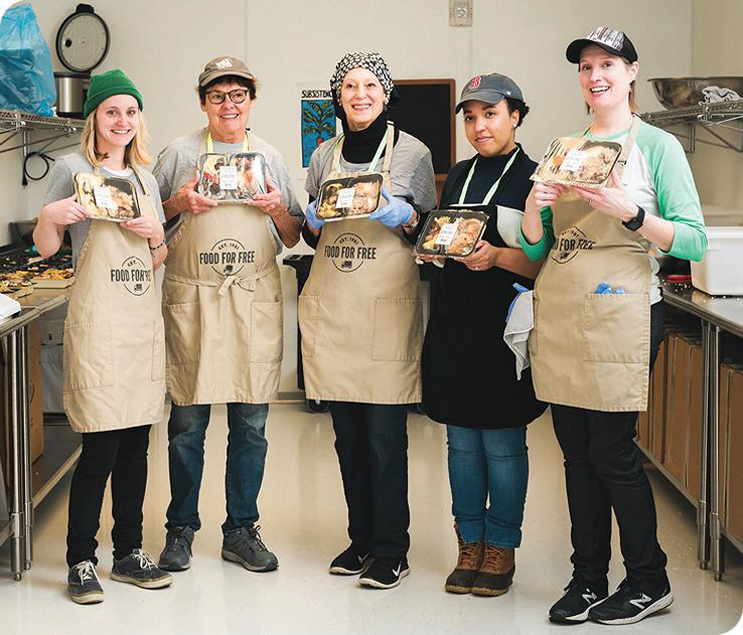 Last fall, Cambridge-based hunger relief organization Food for Free cut the ribbon on a brand-new, custom-built prep kitchen that will allow them to triple the number of meals they prepare and package for people in need. The kitchen is housed at Biogen with support from Life Science Cares.

For the last three years, the organization has operated on a fall grant cycle; applications are reviewed and the board votes in November and December so grant dollars can be distributed by the end of the year. For example, this past December Life Science Cares announced $755,000 in grants to 27 greater Boston-based social service organizations. “We are now moving toward an every-other-year open application process because we’ve learned that to build the types of relationships with the nonprofits that we want to have, it requires getting to know them a little bit,” MacDonald said. “Having such open conversations about their needs takes longer, and then in the blink of an eye, it’s a year later, and we’re back in the application process.”

COULD LIFE SCIENCE CARES BE COMING TO A COMMUNITY NEAR YOU?

While Life Science Cares was established to impact poverty in the greater Boston area, the hope is that it will spread to have a greater impact on the United States as a whole. Perez explains that a new Philadelphia operation is being led by Jeff Marrazzo, CEO of Spark Therapeutics, and Vin Milano, CEO of Idera Pharmaceuticals. They already have several people on their board and have named Peter Wolf as executive director to lead the everyday charge. According to Perez, the Philly location has to adopt the overarching mission and the Life Science Cares areas of focus, but it will raise money on its own, manage its own budgets, and make grants in that local community. Essentially, it is a chapter affiliate structure, where the Philadelphia entity is a single-member LLC, with Life Science Cares Boston being the single member. “We will roll up the same 501(c)(3) designation and file our taxes as one entity, but the operating agreement is very much focused around local decision-making, local fundraising, and local grant making, as decisions being hyper-local is very important to us,” he states. And though things have just been getting underway in Philadelphia, there already has been interest in other U.S. biopharma hubs, and Perez believes the model could be successfully exported to these too. “In a little more than three years we have been able to get over 150 companies involved, and other biopharma hubs could have similar success,” he concludes.