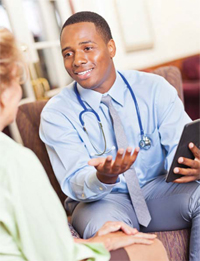 While joining a clinical trial may not be a fitting choice for everyone, experts fear that too few patients are even aware of the option. A report issued by CenterWatch, a clinical trial specialty organization, showed that 70% of all trials nationwide have difficulty recruiting patients. For instance, less than 5% of cancer patients participate in clinical trials, and perhaps more tellingly, reported The Prostate Net, more than 85% of patients did not know clinical trials were even available to them. What’s more, certain populations — racial and ethnic minorities, women, the elderly — are underrepresented in clinical trials, a deficit that experts say could impact treatment in those populations.

Less sophisticated ways of recruiting patients are still very much at play: patient recruitment firms, direct mail, and advertisements on television, radio, and in print. Slightly more savvy methods involve posting banner ads on Web pages and getting your study into a Google keyword search. “Pharma is doing what it can to add arrows to its quiver by taking advantage of all these strategies,” says Joseph Kim, MBS, clinical operations director, Shire, a specialty biopharmaceutical company.

But Shire has added one more arrow to its quiver by being among the first companies to reach potential patients for clinical trials on mobile health (mHealth apps). According to a report from United Kingdom-based Juniper Research, the number of downloads for health-related apps in 2012 will total 44 million by the end of this year. The research firm also predicts that the number of health app downloads will jump to 142 million by 2016. “Everyone is developing mobile health apps, so it’s only natural to put clinical research opportunities on the apps,” says Kim.

Seeking Out The Perfect App
Kim’s strategy was to seek out a disease- related health app and work with the developer/owner of the app to list Shire’s clinical research protocol. That, says Kim, would greatly improve the probability that Shire would reach the right types of patients. Shire was particularly interested in locating an app focused on Central Nervous System (CNS) diseases, which Kim did by simply researching the apps that were available on iTunes. He admits that there were not many apps dedicated to CNS. He did download all of them, though, to see what they had to offer the patient. “I was looking for an app that had a pleasing user interface, was simple to use, and what I believed would add intrinsic value to the patient,” explains Kim. “User reviews were also important. I was looking for signals from patients that an app was sticky and bug-free. Yes, I read all the reviews for all the apps.”

Once he found the app, Kim identified the developer and CEO on LinkedIn and contacted him. The CEO wasn’t all that aware of clinical trials and how they worked from a recruitment standpoint, so there was some time spent educating him — a process made difficult by the fact that the CEO is in Australia and Kim is located in Pennsylvania.

“I didn’t want the trial invite to be an advertisement on the app; it needed to be a feature of the app,” says Kim. The CEO was quite serious about his product and agreed to avoid models that looked like advertisements, such as iAds that deliver pop ups on the bottom section of mobile device screens while people use apps. Kim and the developer worked on new code to create a tab that would invite patients to learn about the clinical trial. Much like LinkedIn that has a feature allowing people to connect, Kim wanted trial listings to be a feature of this app. “This notion of being able to connect was based on the assumption that many patients consider trial participation an extension of their healthcare as it provides them with excellent care and potential access to treatment,” explains Kim.

The original app had some nice features that helped the patient track treatments, symptoms, and behaviors so they could better identify patterns that might help them manage their disease better. There was also a website version of the application where users could examine their data in greater detail.

Now, when a patient downloads the CNS app for $4.99 (initially, the app was free to help grow the user base), a tab appears on the screen for the patient to click. At that point, the language about the trial appears along with a link to a recruitment website. If the patient is interested in learning more about participating in the trial, they are routed to a third-party website to see if they prequalify and are in close proximity to the study site location. Prequalified patients are then referred to the nearest study site. Once the patient is enrolled in the trial, Shire keeps them engaged through text message reminders to help them stay compliant with their visit schedules.

Thanks to special features in the new app, Shire is able to keep track of click-through rates to the trial invitation. “We are currently reaching patients with the app for specific trials, and the click-through rates are 7 to 12 times that of direct mail, and upwards of an 80% to 90% increase over Google keywords,” says Kim. “Though the reach is not yet as big as these other outreach tactics, the results are encouraging and hold great promise.”

Mobile Apps Are A Disruptive Innovation
mHealth as a patient recruitment tool also holds promise as a disruptive innovation. This term, coined by Harvard Business School Professor Clayton Christensen, describes a process by which a product or service takes root initially in simple applications at the bottom of a market and then relentlessly moves up-market, eventually displacing established competitors. In his book, The Innovator’s Prescription, Christensen discusses if pharma is poised to be disrupted and that profit is no longer in the pills — it is in the services or products that surround the pills. However, he said he didn’t know enough about the pharmaceutical business to identify exactly what those products or services might be.

Kim believes that mobile technology could be that disruptive innovation. Considered the most rapidly adopted technology, mobile phones and computers are reaching unprecedented levels because they are becoming less expensive. This technology also crosses socioeconomical levels, race, and gender, making it accessible to all.

“Mobile technology, in particular mobile health apps, empowers patients today because they can become sophisticated managers of their disease,” says Kim. “And there is a huge opportunity for pharma to use the technology to become more patient-centric from a research standpoint.”

So, while mHealth will not obviate the need for patient recruitment firms, the apps will force a disruptive change. “Television ads still make the phone ring, but you can never expect to reach everyone though one channel,” says Kim. “Pharma leaders and recruitment firms need to learn the paradigm of mobile health to adapt and stay competitive.”