How To Launch A Biotech Start-Up

Whether in the early days of DNA cloning in the 1970s, or the boom of the 1980s and 1990s, biotechnology and biotech start-ups have represented the cutting edge of the biopharma and healthcare industry. For those fascinated by the idea of entering the hurly-burly start-up world, Index Ventures hosted “Playground” in October 2013, covering the entire process, from thinking up the idea for a new company to planning for the exit. 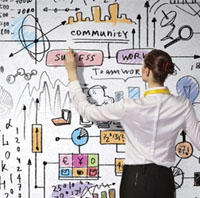 Framing the idea
There are start-ups being created all the time, from university technology transfers to company spinoffs. And all of these are based on what seem — at the time, at least — to be brilliant ideas. “The idea needs to be far enough from conventional wisdom to be exciting, but not so far that people won’t listen,” says Stelios Papadopoulos, former vice chairman at Cowen & Company, an investment banking services firm.

So what differentiates an idea that will make it through to a trade sale or IPO, and the one that falls at the first hurdle? And more importantly, how do you tell the difference? To have a realistic chance of making it through, a company needs to start with a robust technology. The technology needs to meet the following conditions:

Once the idea has been formulated, the entrepreneur next has to validate the market. As Ben Miles, who created Flow Microfluidics (a company that fabricates microfluidic chips to a customer’s design) while still a doctoral student, says, “There is no point working on a technology if there is no market.”

The route to market validation may not always be smooth. Miles initially tried to validate the potential market for his technology by creating a website where people could sign up, but only eight people registered, and only one of them converted into a customer. He found more success when he actually spoke to people in the relevant markets.

Finding the funding
Because biotechnology companies are capital-intensive and very heavily regulated, and the research often has a long timeline, funding is vital, as Kevin Johnson, partner, Index Ventures, explained, “Companies need cash, or there is no company.” So, the next step is talking to investors. But before negotiations actually begin, it is important to take time to think about what the investors are looking for, and make sure that the idea behind the company fits what they need.

The aim of a venture capitalist (VC) is to fund an idea that will provide a return — usually around $3 to $4 for every $1 invested — in order to cover the value of the fund and the VC’s fee, and return a dividend to investors. In order to do that, ideas need to be both outstanding and strategic. Unpacking this concept further, an idea has to be outstanding not only today, but also in 5 or 10 years, when a lot may have changed in the science or the market. To be considered strategic, an idea has to be able to unlock a new market, or meet a critical, unmet need. Being able to fulfill both of these criteria will increase a company’s chances of getting funding. However, while it may seem that the investor always holds the strongest card, it is important to remember that the fate of the investor really is in the hands of the entrepreneur.

Investors are about more than just a supply of cash. They can also provide access to a network of contacts and routes to finding other sources of funding. This is why it is important to select the investors carefully, rather than just picking the first ones who show an interest. Get as much information as possible, through desk research and by talking to other entrepreneurs, as well as by asking the right questions of the investment team.

After all this, it’s worth remembering that however good the idea is, funding isn’t guaranteed. As Graham Defries, partner at Dechert LLP, explains, “Great ideas don’t necessarily always attract money.”

Making an exit
VCs are often focusing on the end, considering how to make a profitable exit for themselves and for their investors. This may be described in terms of a “realistic cash distance to exit,” or more simply, how much money there needs to be put into a project before something with a commercial value emerges. “The VCs have to be certain of an exit, and this should be visible within the first 5 years of a 10-year fund,” says Johnson.

One of the key decisions is how to make the exit. Once upon a time, exits used to be relatively straightforward, involving a simple cash-based trade sale or an IPO. Of late, trade sales are the most likely exit route, and more often include up-front and contingency payments. However, the IPO window is opening up again. Though this is a growing opportunity, going for an IPO is a big decision for a relatively small or inexperienced company, and it takes up a lot of time — planning for the IPO process needs to begin one to two years in advance, and it involves a lot of documentation. But what makes a good IPO? Well, according to Papadopoulos, that depends. For a CEO, it’s lots of cash. For a VC, it’s a huge valuation. For a fund manager, it allows them to trade up. And for an investment banker, it’s where everyone is happy.

As well as choosing the exit route, the timing of the exit is all-important. Exiting too early could mean not getting the full value, and exiting too late could mean missing an opportunity.

As a start-up entrepreneur, especially early in a career, it’s important to get people on board. Miles managed to gain support from his peers, his supervisor, and his lab manager. “Find people who want to change the world with you,” he suggests.