How To Navigate Pharma Collaboration And Licensing Agreements

Collaboration and licensing agreements are an indispensable business strategy for both pharmaceutical companies with commercial capabilities and biotech companies developing novel therapeutics. With collaboration agreements, efforts to develop, seek regulatory approval, manufacture, and market a product are conducted jointly at one or more stages along the drug development pipeline.

Under typical licensing or asset purchase agreements, the licensee or buyer typically agrees with the licensor, seller, or (former) owners of a compound to develop and commercialize a drug or device in exchange for an up-front fee and/or the payment of royalties upon completion of milestones along the development and regulatory timeline.

While parties’ expectations are typically aligned at the outset of the collaboration and licensing relationship (following an initial, robust negotiation process, of course), expectations can become increasingly misaligned when the information and incentives available to one party diverge from the other over time. This is especially true in the pharmaceutical industry, where multiple projects must compete for limited development funds and there are strong financial incentives to launch promising new therapies as quickly as possible and to scrap less successful projects just as quickly. Disappointments in drug development happen frequently, even among the most promising compounds in a company’s development pipeline. For reference, an estimated 50 percent of all Phase 3 trials fail, with the average cost of a single Phase 3 trial ranging from $11.5 to $52.9 million, depending on therapeutic area, and increasing each year.

When collaboration and licensing agreement disputes arise, the repercussions can be costly. In the event of a dispute, companies should think very carefully about whether litigation is the best tool for resolution. Drug discovery and development is an incredibly lengthy, expensive, and uncertain process — but so is litigation. And unlike clinical development, which is at least subject (in part) to the rules of science, litigation results often depend on factors outside the parties’ control. Recent jury verdicts demonstrate that the failure of a single development program can result in licensing disputes worth hundreds of millions of dollars.

More and more, biotech and pharmaceutical companies are taking active steps to (1) avoid collaboration and licensing disputes; and (2) resolve disputes that do arise without resorting to litigation. There is a variety of nonlitigation strategies to help companies navigate the uncertainties surrounding collaboration and licensing arrangements, including:

DEFINE MILESTONES IN CLEAR TERMS
The parties should make sure that milestones are established in clear, objective terms in the agreement to avoid any ambiguity and subsequent dispute regarding when a milestone has been achieved or when payment for meeting that particular milestone is due. Common objective development and regulatory milestones might include the first dosing of a human subject, filing a first NDA (new drug application), or achieving first regulatory approval. Other commonly used milestones, for example, “progressing to Phase 3,” should be further defined to provide a clear triggering event for when payment would be due.

MAKE “REASONABLE EFFORTS” CLAUSES REASONABLE FOR THE DEVELOPMENT PROJECT AT HAND
The issue of how to measure whether a licensee has exercised the efforts required under the agreement to develop or commercialize a product is one of the most important (and most frequently litigated) issues surrounding a licensing agreement. Depending on jurisdiction, whether the licensee agrees to exercise “commercially reasonable efforts,” “reasonable efforts,” “best efforts,” or any other standard in developing or commercializing a product can have real implications on the likelihood of success in litigation. It also impacts whether expert testimony, within-company comparisons to other development projects, and/or industrywide comparisons will be necessary later to determine whether a licensee’s actions met such a standard, should a dispute arise. The parties should be very deliberate in their choice and work at the outset to articulate clear guideposts in any agreement for what efforts will be required to avoid future uncertainty.

VIEW REPORTING OBLIGATIONS AS OPPORTUNITIES
Periodic reporting obligations are a common feature in milestone-structured collaboration and licensing agreements. These are obligations on the licensee to keep the licensor, seller, and/or former shareholders apprised of the status of the licensed product’s development and efforts undertaken to date to further develop or commercialize the product. These reports should be treated as far more than a formality with language cut and pasted from prior reporting periods. Rather, periodic reporting is an invaluable, proactive opportunity to diligently and contemporaneously record the efforts undertaken by the licensee to achieve certain milestones or other obligations under the agreement. It is also a means to document a company’s reasoning in a thorough, well-thought-out manner, should it decide to eventually cease development. By keeping the licensor abreast of development efforts, the licensee can manage expectations and hopefully avoid a costly milestone dispute. Should a dispute arise, such reports will be crucial evidence for demonstrating that the licensee exercised the diligence in development required under the agreement.

THINK STRATEGICALLY ABOUT CHOICE-OF-LAW, FORUM SELECTION, AND ARBITRATION CLAUSES
A collaboration agreement can refer disputes to arbitration or remain silent on this issue, sending any disputes to a court by default. The parties should think strategically about which option would serve them best at the outset. Court proceedings generally allow greater opportunities for discovery, jury trial rights, and greater rights to appeal decisions. Jurisdictional differences in contract law, and in particular the interpretation of what constitutes “exercising reasonable efforts” in drug development, can have real consequences on the likelihood of success in litigation. In contrast, arbitration generally ensures greater speed in resolving disputes, confidentiality, the ability to choose the decision maker(s) in settling the dispute, and the finality of limited judicial review of the arbitral process. Additional considerations arise when the parties are not headquartered in the United States. Arbitration can provide an opportunity to significantly limit the amount of discovery that will be required, should a dispute arise. This may be particularly helpful for companies operating outside the U.S., with workforces less familiar with, or prepared for, the demands of U.S.-style discovery procedures.

UTILIZE DISPUTE RESOLUTION CLAUSES TO SETTLE ISSUES AMICABLY
Even in the event that a dispute arises, the parties can preemptively agree to strategies to resolve the dispute long before they reach trial or arbitration. During the contract negotiation process, consider requiring that the contracting parties initiate a multi-stage dispute resolution process before any party can initiate a lawsuit or commence arbitration. Known as an escalation clause or multistage dispute resolution clause, this contract provision requires that the parties first negotiate in good faith to try to resolve a dispute amicably before they can initiate proceedings. This opportunity can provide invaluable time to exchange information, renegotiate arrangements that no longer serve the interests of the parties, and avoid rushing to court or arbitration. 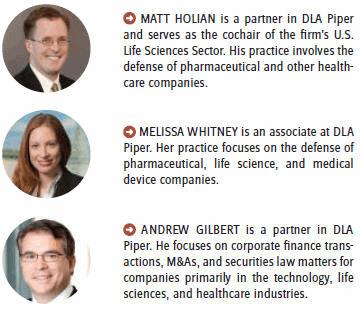